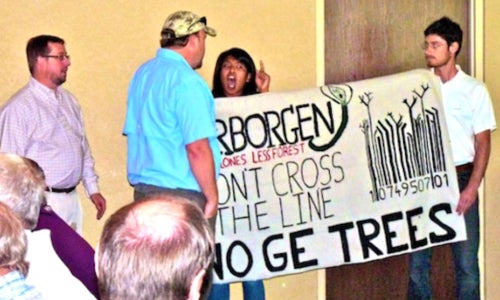 The U.S. Department of Agriculture (USDA) is currently considering approval of the first genetically engineered (GE) tree for commercial use—a GE eucalyptus tree developed by the biotechnology corporation ArborGen. The tree is designed to withstand colder climates and would primarily be cultivated to provide pulp for paper and wood pellets used for fuel. 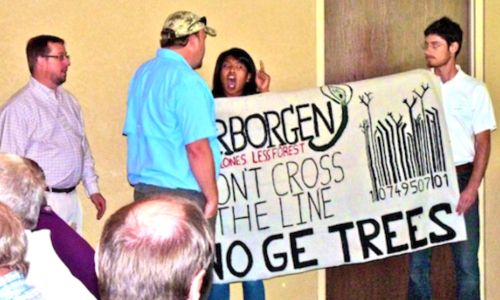 Stephanie Hall, a member of the Toad clan of the Seminolee Miccosukee People, interrupts the ArborGen event. Photo credit: Will Bennington/ GJEP

Yesterday in Tallahassee, FL, outraged demonstrators interrupted an event hosted by ArborGen, giving a stark warning to participants to expect resistance and growing protests should they plant GE trees, according to a press release from the Global Justice Equality Project (GJEP). The event brought together landowners and foresters from the industrial tree plantation sector and featured top ArborGen scientists working on GE trees.

“We sent a clear message to participants—plant genetically engineered trees and expect resistance,” said Keith Brunner, an organizer with GJEP. “Invasive GE eucalyptus, planned for deployment across the U.S. South, would irrevocably devastate native ecosystems, exacerbate droughts and lead to catastrophic firestorms. This must be stopped before it is too late.”

If approved, ArborGen could soon sell millions of the freeze-tolerant, potentially flammable and invasive GE eucalyptus trees across the country. According the GJEP, approval could open the door to approval for other GE species like GE pine and poplar, which pose additional risks due to the likelihood of contamination of wild species in native forests.

Stephanie Hall, a member of the Toad Clan of the Seminolee Miccosukee People, also pointed out the link between ArborGen’s plans and the history of genocide against Indigenous Peoples in the region, saying, “ArborGen could not be planning for the development of vast industrial plantations of genetically engineered eucalyptus trees on land in Florida without the previous history of genocide and forced removal of Indigenous men, women, children, plants and animals from the region. People should not be complicit in this—we must ban genetically engineered trees.”

“Early last year, the USDA received nearly 40,000 comments opposing ArborGen’s GE eucalyptus, with only a handful received in favor,” stated Anne Petermann, executive director of GJEP, noting only four of the submitted comments were supportive of the approval of GE eucalyptus. “Then in May of 2013, the international Tree Biotechnology conference in Asheville, NC, was protested and disrupted for almost a week by hundreds of protesters. These protests and today’s disruption are only the beginning. As the USDA considers ArborGen’s request to legalize GE trees, opposition to these trees and the threats they pose to communities and native forests continues to grow.”

As has been the case with GE foods, despite whatever negative consequences the technology may bring about, GE “factory forests” will likely be highly profitable for the biotech companies, as GE crops have been for companies like Monsanto and Syngenta. The Center for Food Safety reports that should the USDA approve AbroGen’s GE eucalyptus, the company has projected its profits will grow from $25 million to $500 million in five years. Corporations almost always exist to make money, so Americans should be able to count on the USDA to offset greed with some sort of ethics and make decisions that keep public health and environmental protection as their highest priority.