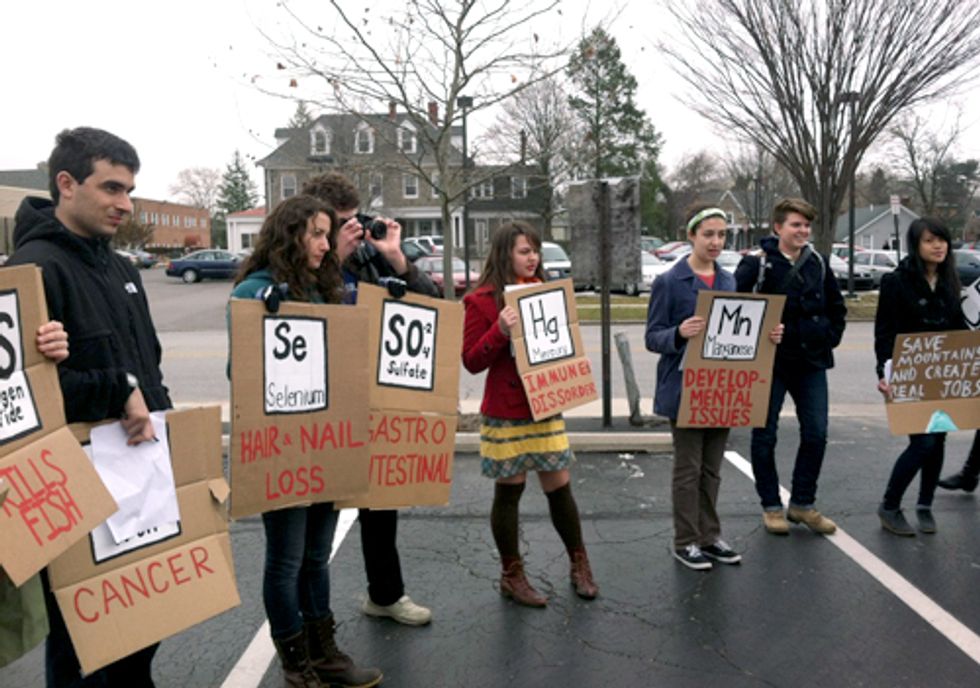 Quakers, students, and community activists held the largest coordinated action of their campaign at 15 PNC banks across the eastern seaboard yesterday as part of Earth Quaker Action Team's (EQAT) effort to end PNC's investments in a controversial strip mining practice known as mountaintop removal. At many locations, concerned community members brought samples of drinking water taken from a well in Eunice, West Virginia that had been contaminated by mountaintop removal operations financed by the bank.

Demonstrations included a banner drop over a highway in Morgantown, West Virginia, mock "taste tests" of contaminated water in Princeton New Jersey, a parade of toxic chemicals, a 15 person sit-in inside a bank in Bryn Mawr, Pennsylvania and more.

"PNC comes from a merger between Pittsburgh National and the Quaker Provident Bank," said Amy Ward Brimmer, executive director of EQAT. "So as Quakers, if PNC is going to advertise itself as a green bank, its important to us that they act with integrity and live up to their environmental commitments."

Mountaintop removal has destroyed more than 500 mountains in Appalachia and buried more than 2,000 miles of streams with toxic chemicals that have been linked to health conditions such as cancer.

“We know PNC can do better, and we are committed to using nonviolence to stand up for the people of Appalachia." said Bryn Mawr student Samantha Shain. "A full sector exclusion [on mountaintop removal investments] will bring Appalachia closer to having clean and safe drinking water for everyone.”

Two years ago, in response to demonstrations by EQAT, PNC updated their Corporate Responsibility Report with a policy that prohibits investments in coal companies that source more than 50 percent of their coal from mountaintop removal. The policy, however, does not apply to any of the six largest mountaintop removal corporations that PNC does business with and has not significantly impacted PNC's investments in the industry, according to a report by Rainforest Action Network.

EQAT is a Quaker-based direct action group whose current campaign is Bank Like Appalachia Matters. To support their goals, EQAT has organized an initiative encouraging individuals, Quaker meetings and institutions to remove their money from PNC until the bank commits to a sector exclusion on investments in corporations that practice mountaintop removal.