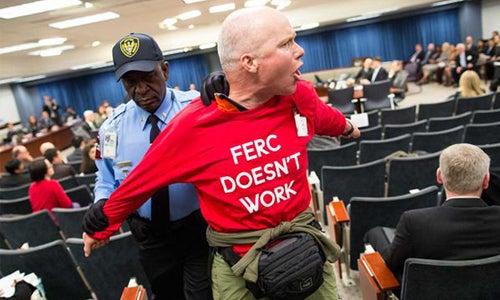 Last week at the monthly meeting of the five Commissioners of the Federal Energy Regulatory Commission (FERC) in Washington, DC, a group of 20 Beyond Extreme Energy (BXE) activists took action. Two people, myself and Ellen Taylor, attempted to read the statement below just before the meeting began, but as Ellen began to speak FERC security moved on the two of us and moved us out of the room and out the front door of the building.

Several minutes later, right after the pledge of allegiance, a dozen other red-shirted BXE’ers scrambled from their seats up to the front of the room, right next to the table where the commissioners sit. They sat down, locked arms and began chanting, “Stop construction at Cove Point.” As the FERC Commissioners hastily got up and left the room, the people chanting were also moved by security.

When we were all back together outside the front of the building, we walked down to the part of the building closest to where the meeting was being held and chanted once more for several minutes as loudly as we could.

The statement below explains why we took this action.

As has been true for every one since their November, 2014 meeting, we will be at their April meeting and then, in very large numbers, at the one on May 21, the first day of our nine days of action and getting organized in DC.

Here we are again—Beyond Extreme Energy at your monthly meeting. We are here about the permit you granted on Sept. 29 last year to Dominion to build facilities for the liquefaction and export of natural gas at Cove Point in Lusby, Maryland.

On Oct. 15 FERC’s granting of this permit was appealed administratively, as it was necessary to do. By then Dominion had begun construction of their planned LNG export terminal, with FERC’s approval and blessing, and they have been doing so ever since.

By law, you were required to answer the administrative appeal within a month. You did so by giving yourself an extension of time to give an answer to this appeal, as you have done many, many times with other gas infrastructure expansion projects. And as has been true for those projects, it is now going on half a year of your coming to a decision on this appeal, and Dominion just keeps building and building.

As you know, the Cove Point residents cannot go to court to challenge the granting of this permit until you rule on the appeal. You also know that, to the best of our knowledge, you have rarely, if ever, in recent years certainly, decided to overturn your initial granting of a FERC gas infrastructure expansion permit.

And by the way, this issue was raised almost two years ago in a meeting Ted Glick took part in with then-Chair Jon Wellinghoff, and it was raised in meetings with Chair LaFleur last June and just two weeks ago, and nothing has changed.

Efforts have been made by the use of peaceful, nonviolent direct action at the construction sites to address this situation; 27 people who took action in this way last November and December were convicted and sentenced last month, and just last week they received a nasty letter from Dominion telling them that if they step onto Dominion property anywhere in the USA, they could face criminal prosecution.

You are continuing to allow Dominion to proceed with construction while simultaneously asking for a lot of new information from them—why didn’t you ask for this before you granted the permit in the first place? You are taking months to rule on local residents’ request for a rehearing. You are refusing to rule on a request from their legal team to stay all construction while FERC considers their request for a rehearing.  The combined result of this is that Dominion gets to construct for many months before the case gets heard before the Court of Appeals. As has been true with other projects, that could make for a prejudicial situation when it finally gets into court.