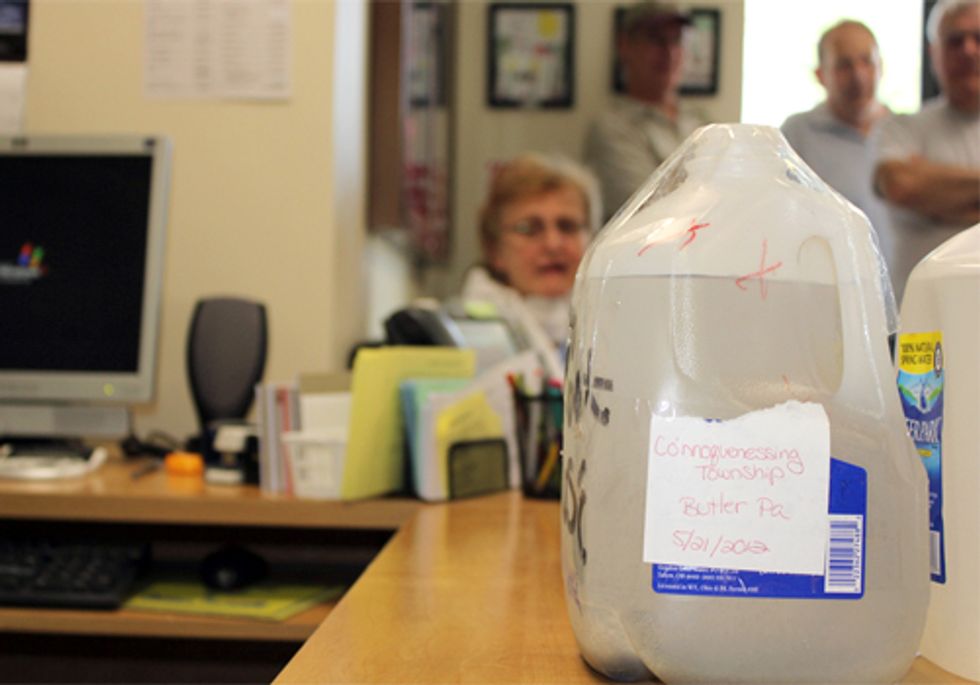 On May 21 about 20 members of Marcellus Outreach Butler and their allies entered the office of State Rep. Brian Ellis (11th district) to call attention to the dangers created by Act 13 and demand justice for the ten families in Ellis’ district whose water has been contaminated by fracking operations. Clad in hazmat jumpsuits and carrying jars of contaminated water from households in Connoquenessing Township, the protesters demanded to know why, despite evidence of water contamination and air pollution in his own district, Representative Ellis sponsored Act 13, which takes away local authority to zone natural gas drilling in Pennsylvania. See photos by clicking here.

The protesters insisted that they would not leave until Ellis’ staff arranged a phone call with the representative, who was in Harrisburg, Pa. While the staff attempted to get Ellis on the phone, the group filled gallon jugs with water from the office bathroom to bring to the families in Connoquenessing whose water was contaminated by Rex Energy’s fracking operations.

Ellis has arranged a small, one-time donation of bottled water from Wal-Mart for the families which will only last several weeks. Meanwhile the Department of Environmental Protection has halted an investigation of the contamination and Rex Energy has yet to be held accountable for the problems. As fracking in the area continues, residents struggle to get by on water deliveries from area churches and continue to experience headaches, nausea, rashes and other acute health problems. Last night a fish kill was reported in the same area on the Connoquenessing Creek where Rex Energy has been caught illegally dumping fracking wastewater before.

When Representative Brian Ellis was finally contacted, spokespeople from the group enumerated the problems with Act 13.

“Act 13 gives the industry a free pass to site drilling operations within 300 feet of schools, hospitals and dense residential areas, opening the door for more situations like the one in Connoquenessing to occur throughout the state,” said Lou Hancherick of Evans City.

Michael Bagdes-Canning, of Butler added, “The impact fee included as part of the act amounts to the lowest tax on natural gas production in the country and cannot be used to create public water infrastructure to replace water for families whose wells have been contaminated, like the ones in the Woodlands.”

The law goes so far to protect the industry as to restrict healthcare providers from publicly disclosing information about the chemicals their patients are exposed to from natural gas operations.

Throughout the conversation, Mr. Ellis insisted that he was not aware of any cases of groundwater contamination caused by fracking despite having previously acknowledged the problems in Connoquenessing. After deflecting many questions, Ellis indicated that he had a meeting to attend and would have to end the call.

After securing 20 gallons of water from the office bathroom to deliver to the affected families, the protesters finally exited the office, leaving a gallon of contaminated, black water from the Woodland’s area on Ellis’ desk for the representative to inspect upon his return.