Protesters at UN Climate Talks in Bonn: We Choose Renewable Energy. Stand With Us or Step Aside. 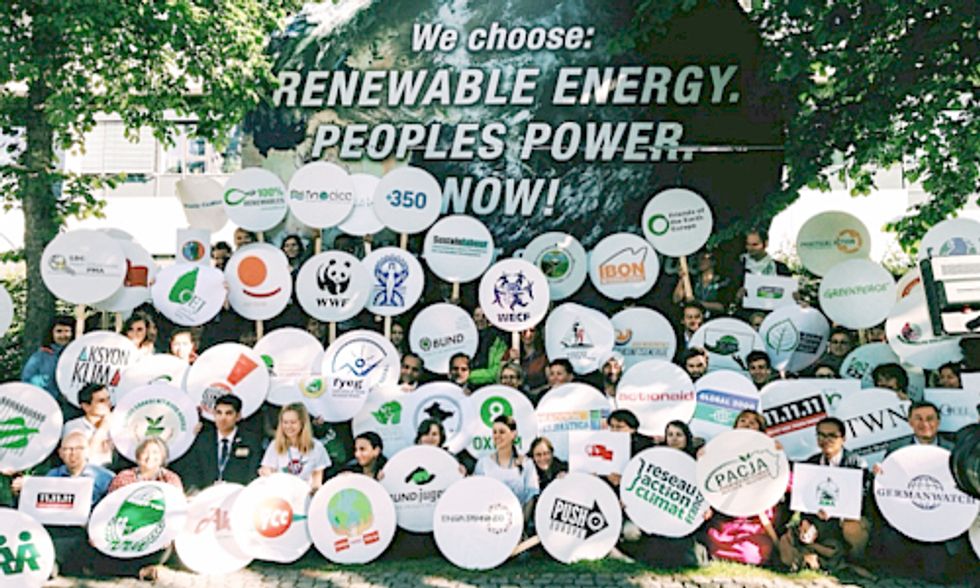 More than 100 people held a demonstration in Bonn, Germany today, outside the venue where the ministers of environment are meeting for the United Nations (UN) climate negotiations.

Civil society organizations from around the world pictured outside the UN climate negotiations in Bonn, June 6, calling on governments to “stand with us or step aside.” Photo credit: Hoda Baraka/ 350.org

The demonstration in Bonn is intended to show the growing public support for climate action and a just energy transformation. The groups, including Action Aid, Oxfam, Greenpeace amongst others, held a banner that read: “We Choose: Renewable Energy. People’s Power now!”

Across continents people are mobilizing and taking to the streets in bigger numbers and increasing intensity to stand up to vested interests and fight for their future and those of the next generations.

This coming September, as heads of state go to New York City for the climate summit, we will be taking to the streets to bend the course of history with an unprecedented climate mobilization—in size, beauty and impact.

We are people who participated in the walk out of the Warsaw Climate Conference and those who supported and united with its call for more serious climate action. We have come together to reiterate to all "leaders" participating in the UN climate negotiations that they are dangerously off track in addressing the climate emergency. We call upon them to listen to the demands and solutions of people.

The walk out was an act of protest and indignation over governments’ continued failure to take decisive and swift action against the biggest threat to both people and the planet, and an act of condemnation of continued domination and sabotage of the international climate talks by powerful corporate interests.

In the face of massive destruction, displacement and loss of lives caused by current levels of global warming and the certainty of much worse impacts in the near future, governments continue to choose to act in the interests of a wealthy few, and collude with big business to defend unsustainable consumption and production models ahead of the urgent need for a sustainable, ecological and just world.

We are more determined than ever to fight for the survival of our families, our communities and our peoples across the world—a survival that rests on nothing less than the fundamental transformation of a system that has generated massive impoverishment, injustices and a climate crisis that threatens all life on earth. People are waging this fight in various arenas in every corner of the globe, over every dimension of their lives: food, energy, health and security, jobs and livelihoods.

People are mobilizing everywhere and taking to the streets in bigger numbers and increasing intensity to stand up to vested interests and fight for their future and those of the next generations. People driven solutions, compatible with planetary limits are being created and asserted at local, national and global levels—aimed at meeting the needs of people rather than the relentless pursuit of profits for big business and wealthy elites.

We are back, far more strengthened in giving voice to those who are already acting with the urgency needed to avoid the worst impacts of climate change—the huge majority of civil society around the world that you, the ministers, represent and can not ignore any longer.

In the coming weeks and months, towards and during the Social COP in Venezuela, the People’s Summit and the COP20 in Peru, and the COP 21 in France, we will be fighting harder than ever for governments to:

The global climate movement is building its strength and power in every country of the world. We call on those who claim to represent us to either act in our interests or step aside.