Protecting Our Waterways When Disaster Strikes 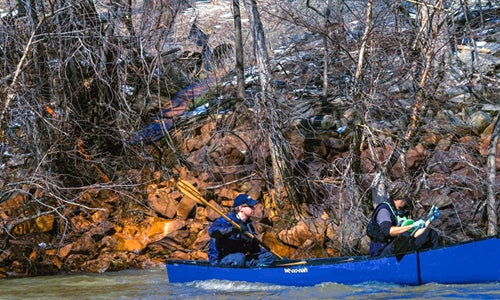 In 2014 alone, there have been a series of unprecedented disasters on our waterways. A climate of lax government regulations including the recent weak rule for the disposal of toxic coal ash from coal-fired power plants by the U.S. Environmental Protection Agency, makes it critical for us to find a way to protect communities and the integrity of our waterways when a water emergency strikes.

When a chemical used to wash coal (4-methylcyclohexane methanol, or MCHM) leaked into the Elk River in West Virginia from a storage facility in January 2014, more than 300,000 residents were suddenly left without water to drink. As MCHM is not listed in EPA’s public database of toxic chemicals and is not federally regulated, this incident showcased just how vulnerable we all are to facing a similar fate.

The rapidly increasing volume of toxic, volatile crude oil by rail and barge has upped the ante on the risk of future accidents even more.

And this past February, a collapsed stormwater pipe released 140,000 tons of toxic coal ash sludge and wastewater into the Dan River in North Carolina, a public drinking water supply for downstream communities like Danville, Virginia. State regulators and Duke Energy, the company responsible for the spill, waited more than 24 hours before notifying the public that it had happened. And just weeks after this catastrophic spill, Waterkeeper Alliance discovered that Duke Energy had deliberately and illegally dumped 61 million gallons of coal ash into the Cape Fear River.

Waterkeeper Alliance is taking action to be part of the solution by launching a rapid response program based on its proven protocol in responding to and remediating some of the nation’s worst waterway disasters. Waterkeeper Alliance staff and local Waterkeepers provided on-the-ground support, water quality testing, and advocacy for the Dan River incident and in Lynchburg, Virginia, when a train carrying volatile Bakken crude oil derailed and exploded, spilling an estimated 50,000 gallons of oil into the James River. In past years, Waterkeepers have responded to Hurricanes Floyd and Sandy and the BP oil disaster in the Gulf of Mexico.

Deploying a highly-trained team of advocates and experts by boat and aircraft to assess a situation, test the water, document the impact and rapidly share information with the media and the public allows Waterkeeper Alliance to work quickly to amplify the voice of affected communities, dispersing the truth about the impacts and dangers in real time and ensuring that polluters and government officials don’t have the opportunity to downplay or cover up the threat. The response team then advocates for the waterway and affected communities until a cleanup plan is implemented. This requires a myriad of advocacy actions, including filing lawsuits and pursuing legislative remedies.

As a result of rapid response work by Waterkeeper Alliance and North Carolina Waterkeepers on the Dan River, Duke Energy has agreed to clean up not only the spill site but also three other sites with leaking coal ash ponds in Asheville, Charlotte and Wilmington.

Throughout history, the biggest wins for our environment have been the result of citizens advocating for their rights. As always, people are the last line of defense when communities are under assault from polluters. Please join us in helping to defend communities across the country and around the world.