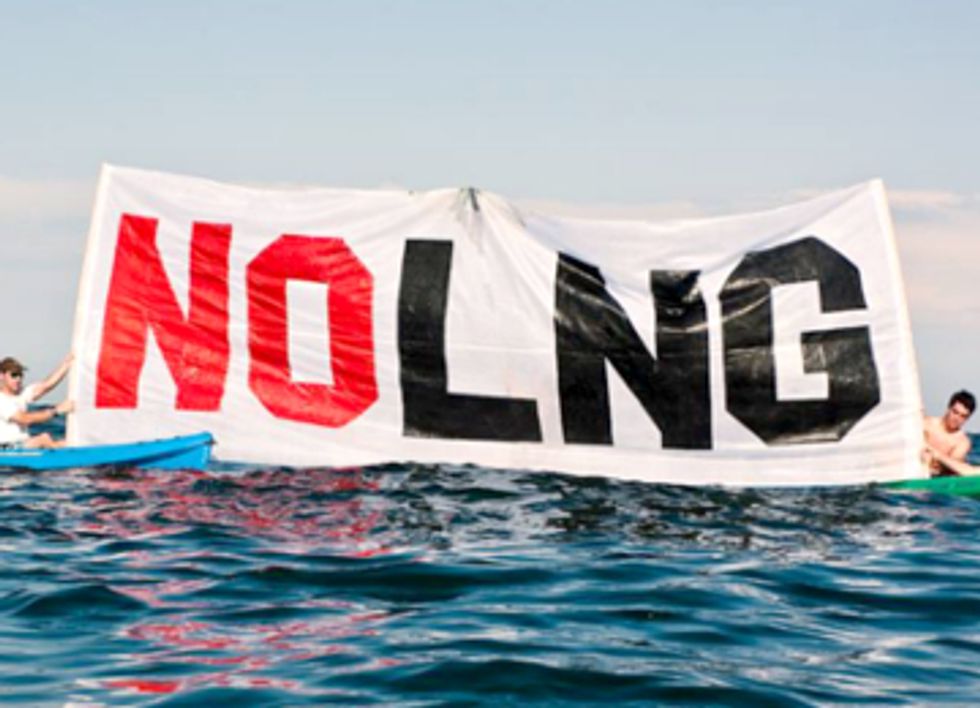 The first town hall meeting concerning the risks of the proposed Cove Point Liquified Natural Gas (LNG) export terminal in Maryland was held Tuesday night, Oct. 23. It was a big and rousing success. At least 300 people attended, most of them local residents. It was held at the Southern Community Center in Lusby, MD, in Calvert County, just a few miles from where Dominion Resources wants to build an industrial terminal to export fracked natural gas—piped in from Appalachia—and ship it to India and Japan. The $3.8 billion facility would chill the gas to 270 degrees below zero, turning it into liquid for 1000-foot-long shipping tankers coming into the Bay. It would generate 3.3 million tons of carbon dioxide (CO2) pollution per year.

By 6:30 before the 7 p.m. town hall meeting, the room was filling up fast. By 6:45 it was clear the room we had reserved was not big enough, and we were scrambling to find and set up more chairs, enlisting the participation of those already in the room. Even after we removed a partition to double the size of the room, it was standing room only when we got started about 7:10.

The meeting went on for over two hours, with all listening intently to the four speakers, followed by good questions and statements after the speakers finished. It was a productive and enlightening community conversation for all in attendance.

Mike Tidwell of Chesapeake Climate Action Network provided detailed information on what is planned, using Dominion Resources' own numbers, showing that this would be a carbon pollution nightmare for the state. Read Tidwell's recent oped in the Washington Post. Jean Marie Neal, a member of the Cove of Calvert Home Owner Association, spoke of the many negative impacts for local residents, including safety, noise and air pollution issues as well as impacts on property values.

Exporting LNG from Dominion's Cove Point facility is the industry's opportunity to drive up gas prices at home and drive up its own profits—at the communities' expense. Photo credit: Chesapeake Climate Action Network

Fred Tutman, Patuxent Riverkeeper and a 20-year activist on the Patuxent River, spoke of the environmental impacts such a project would cause in the area. And Moneen Nasmith, associate attorney with Earthjustice, explained how the Federal Energy Regulatory Commission (FERC) plans to come to a decision on whether or not to approve this project. She underlined that, as of now, they are not planning to use a comprehensive Environmental Impact Statement process which, among other things, would provide citizens more opportunity for comment and more transparency in the FERC process.

It was clear in the question-and-answer and open discussion part of the meeting that the vast majority of people present had serious concerns. A local waterman, for example, stood up and explained his opposition to the project because of water and air pollution concerns.

The size of the turnout shows the controversial nature of this proposed project and the depth of concerns in the immediate area. This concern is spreading through the state as people fear that approval of this LNG export terminal would lead to fracking in Allegheny and Garrett counties and more pipelines, compressor stations and other fracking infrastructure in many other counties.

A final note: about one-quarter of those present were union members, primarily from Iron Workers Local 5 and from throughout the state, who came with green flyers in support of the Dominion project. But over the course of the meeting these workers learned of the strong local opposition to the facility and why people have so many concerns. They also learned of the vast number of potential jobs available to the building trades unions through wind and solar energy production and build-out in Maryland. By the end of the meeting some of the workers were asking questions about this potential, clearly interested in the possibilities.