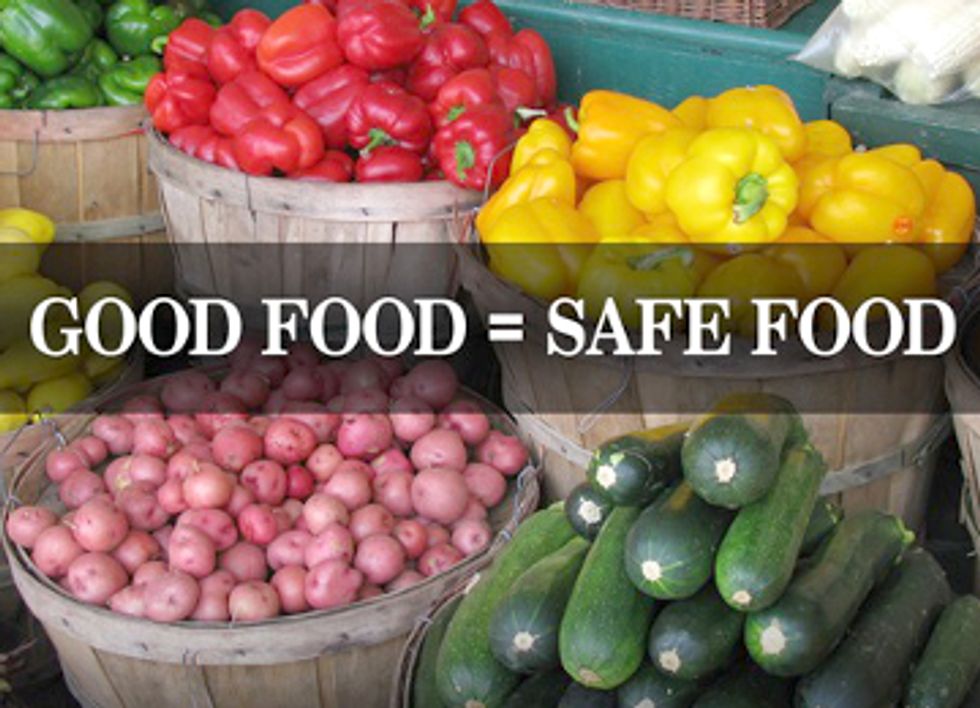 After years of deliberation in Congress, interagency meetings, lobbyist activity and a never-ending stream of food poisoning outbreaks, the Food and Drug Administration (FDA) is finally poised to implement the Food Safety Modernization Act (FSMA).

However, according to a just released white paper by The Cornucopia Institute, the FDA’s draft rules are so off the mark that they might economically crush the country’s safest farmers while ignoring the root threats to human health: manure contaminated with deadly infectious pathogens generated on “factory” livestock farms and high-risk produce-processing practices.

“In response to deadly outbreaks involving spinach, peanut butter and eggs, Congress acted decisively three years ago to pass the Food Safety Modernization Act,” said Mark A. Kastel, codirector at The Cornucopia Institute. “Better oversight is needed but it looks like regulators and corporate agribusiness lobbyists are simultaneously using the FSMA to crush competition from the organic and local farming movement.”

Cornucopia’s report closely examines the FDA’s draft regulations for implementing the new food safety law, and a new FDA guidance designed to control Salmonella in eggs produced by outdoor flocks. The report concludes that the new proposals would ensnare some of the country’s safest family farmers in costly and burdensome regulations in a misdirected attempt to rein in abuses that are mostly emanating from industrial-scale farms and giant agribusiness food-processing facilities.

Family farm advocates, and groups representing consumers interested in high-quality food, thought they had won a victory when the Tester/Hagan amendment was adopted by Congress exempting farmers doing less than $500,000 in business from the new rules. But Cornucopia’s report suggests the FDA seems more interested in a “one-size-fits-all” approach to food safety regulation.

In reality, the report suggests that small farms are not really exempt. The FDA is proposing that the agency can, without any due process, almost immediately force small farms to comply with the same expensive testing and record-keeping requirements as factory farms.

“In practical terms,” explains Judith McGeary, a member of The Cornucopia Institute’s policy advisory panel and executive director of the Farm and Ranch Freedom Alliance, “the FDA will be able to target small farms one-by-one and put them out of business, with little to no recourse for the farmers.”

The FDA’s economic analysis also shows that farms over $500,000 (still small in the produce industry) will be significantly impacted with some being driven out of business.

“The added expense and record-keeping time will potentially force many small and medium-sized local farms—owner-operated, selling at farmers markets directly to consumers or to local grocers and natural food co-ops—out of business,” Kastel added.

The Cornucopia Institute is encouraging concerned farmers and consumers to visit its website and download a proxy letter to be sent to the FDA encouraging the agency to reconsider some of the key deficiencies in the proposed regulations.

The Institute’s analysis points out that the FDA has wildly inflated the number of foodborne illnesses that originate from farm production (seed to harvest rather than contamination that occurs later in processing and distribution).

It also alleges that the FDA has failed to recognize that specific processed crops such as fresh-cut, or produce grown in certain regions are the genesis of 90 percent of dangerous outbreaks in fruits and vegetables. In addition to imports from countries like Mexico, where the most recent Taylor Farms Cyclospora outbreak originated, the evidence indicates that fresh-cut bagged/boxed salad mix and greens, other pre-cut vegetables and sprouts are much more prone to contamination.

“The proposed rule is a mess,” said Daniel Cohen, owner of Maccabee Seed Company, a longtime industry observer. “The FDA has much greater expertise on food safety issues from harvest to the consumer, but focused instead on farming issues from planting to harvest. Limited, modest and more focused steps to improve on-farm food-safety could have produced simple, affordable, effective and enforceable regulation.”

According to Cornucopia, the most important lost opportunity in the collaborative process between Congress, the FDA and the USDA is the lack of attention directed at the giant concentrated animal feeding operations, or CAFOs (factory farms) raising livestock. The massive amount of manure stored at these factory farms is commonly tainted by highly infectious bacteria that have been polluting America’s air, water and farmlands.

“Federal regulators propose nothing to address sick livestock in animal factories and their pathogen-laden manure that is contaminating surrounding rural communities, nearby produce farms and our food supply,” Kastel lamented.

The 2010 salmonella outbreak in eggs, centered in Iowa, shone a spotlight on industrial-scale egg houses confining thousands of hens in filthy and dangerous conditions.

The salmonella outbreak led to comprehensive regulation and new guidance for organic farmers. Organic farmers are required by federal law to provide outdoor access to their hens and the new FDA guidance, according to Cornucopia, materially undermines this management practice. And they are doing this despite scientific evidence tying higher rates of pathogenetic contamination to older, massive factory farms with cages and forced molting (practices banned in organics) rather than raising birds outside.

“Their new guidance, on one hand, will make it difficult, expensive and maybe even impossible to have medium-sized flocks of birds outside,” Kastel stated. “At the same time, the FDA has colluded with the USDA’s National Organic Program to say that tiny ‘porches’, which hold only a minute fraction of the flock, will now legally constitute ‘outdoor access.’ This is a giveaway to conventional egg companies that are confining as many as 100,000 birds in a building and calling these ‘organic.’”

The Cornucopia Institute has publicly stated that they are investigating legal action against regulators if enforcement action is not taken, under the Organic Foods Production Act, against the large industrial operations confining laying hens and broilers indoors.

The issue of food safety in Washington has been a contentious one, causing rifts even between nonprofits representing the interest of consumers and family farm organizations that have been historically aligned in support of organic and local food. Some consumer advocates pressed for no exemptions, even as farm policy experts have supplied evidence indicating smaller, family-operated farms are inherently safer.

“Only an idiot would not be concerned with food safety,” said Tom Willey, a Madera, California, organic vegetable producer and longtime organic advocate.

“The antibiotic resistant and increasingly virulent organisms contaminating produce, from time to time, are mutant creatures introduced into the larger environment from confined industrial animal operations across the American countryside," added Willey. "The FDA’s misguided approach could derail achievements in biological agriculture and a greater promise of food made safe through respect for and cooperation with the microbial community which owns and operates this planet upon which we are merely guests.”