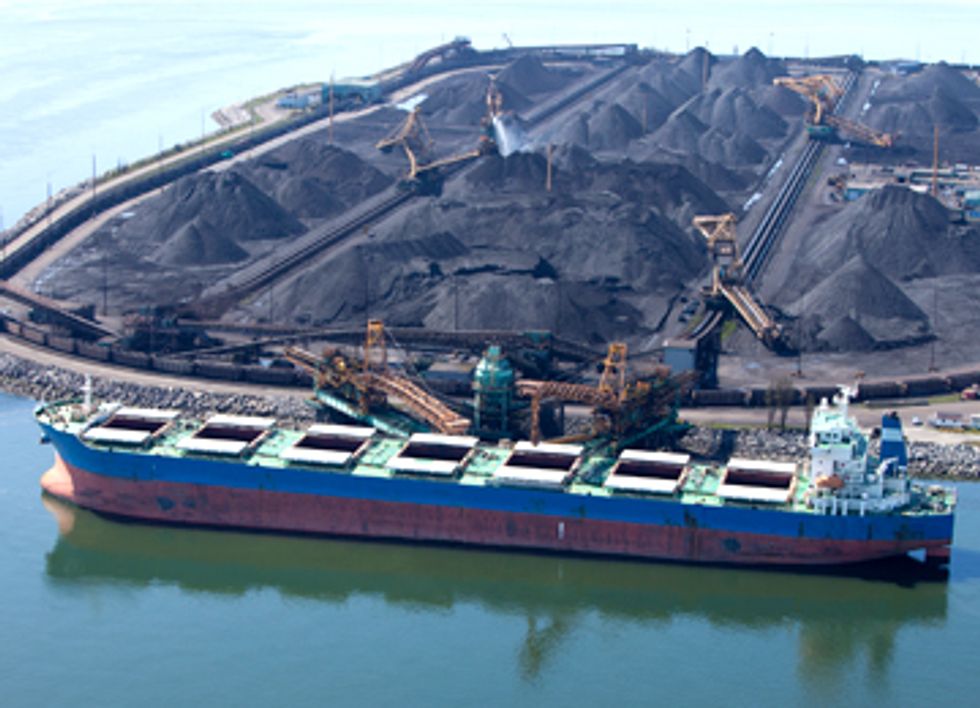 On Wednesday, Northwest-based groups filed a formal petition with the U.S. Army Corps of Engineers asking it to evaluate the cumulative and related impacts of all proposed coal export terminals in Oregon and Washington.

There are currently two active coal export proposals in Washington—Cherry Point (north of Bellingham) and Longview—and one proposal in Boardman, OR, that would collectively export a total 100 million metric tons of coal per year if built. Formally submitted by Earthjustice, the petitioners ask the Army Corps to conduct a single, comprehensive, area-wide environmental impact statement (EIS) under its National Environmental Policy Act authority.

"The threats from these coal export proposals connect communities across the region and cannot be overlooked,” stated Cesia Kearns, senior campaign representative for Sierra Club’s Beyond Coal Campaign and acting director for Power Past Coal. “We have been calling for an area-wide EIS for over a year; it’s time for the Army Corps to stop sitting on its hands.”

More than 500 businesses, 160 elected officials—including both Gov. Kitzhaber (D-OR) and Gov. Inslee (D-WA) and 10 members of Congress—three dozen municipalities, more than 100 organizations and a dozen newspapers, including the region’s largest The Seattle Times, have called for a full and thorough review of the proposed terminals. At least 35,000 citizens wrote to the Army Corps calling for an area-wide EIS.

“Spokane, WA, is hundreds of miles away from the proposed terminals yet we are ground zero for coal trains,” said Spokane, WA City Council President, Ben Stuckart.

“If all of the proposed coal terminals were built, Spokane could see 40 and-a-half-mile long coal trains—empty and full—rolling through town every day. Our air quality would suffer, traffic for commuters and truckers would get worse and taxpayers could wind up paying millions of dollars for new infrastructure. We can’t just draw a circle around the proposed terminals and study the on-site effects. We need to look at impacts and costs to communities all along the rail-line and also consider the bigger picture, like how burning all that coal would worsen climate change.”

In the fall of 2012, the Army Corps, Washington Deptartment of Ecology and Whatcom County Council conducted EIS scoping hearings in Washington for the proposed Cherry Point coal export terminal. However, they did not hold any hearings in Montana or Idaho despite rail-line communities in those states threatened with significant increases in coal-train traffic if the terminal was built. The petition to the Corps asks for the area-wide EIS to include impacts from increased mining in Wyoming and Montana, particularly on public lands; increased rail traffic throughout Wyoming, Montana, Idaho, Washington and Oregon; and the effect of coal export on domestic energy security and pricing.

“These ports, if approved, would have tremendous impact on the Helena, MT, community," said Mary Ann Mackay, resident.

"Coal mined in the Powder River Basin, primarily Wyoming, would travel through Helena on the way to these ports and would dramatically increase the volume of coal train traffic in our community. This additional train traffic would further stress our aging infrastructure and increase air pollution from diesel fumes and coal dust. A comprehensive review of these impacts is the only way that we can ensure that our community can plan adequately for resolving the impacts from the increase in coal train traffic and ensure that Helena citizens would not be left footing the bill for necessary upgrades.”

More than 600 health professionals have either come out against or raised deep concern and caution over the proposed terminals, calling attention to the threat of increased coal train traffic that would result in more congestion, health impacts and more mercury, diesel and carbon pollution.

"Coal is the dirtiest and most dangerous fossil fuel. The production, transport and combustion of coal is harmful to its workers and to everyone else along the line, from the mines, to the trains, to the barges, to the ports and beyond," stated Dr. Susan Katz of Oregon Physicians for Social Responsibility. "The Army Corps of Engineers must ensure that the right questions are asked before serious harm is done to the health of our families and our environment."

Other issues that groups ask the Army Corps to consider in an area-wide EIS include: traffic, pollution, safety, health and congestion issues along the rail line between Powder River Basin area coal mines and the Pacific Northwest terminal sites.

“I live and farm along an ‘alternate’ rail line that would likely experience direct and indirect impacts if coal export is permitted from the Pacific Northwest,” said Nicole Brown, owner of Moondance Farm in Acme, WA. “Since these impacts are removed in distance and time from the proposed terminals, an area-wide EIS should be required to ensure fair treatment of all potentially impacted communities.”

The groups want the Army Corps to look at the effects of significantly increased barge and cargo ship operations on the Columbia River and in Puget Sound and combined vessel traffic impacts and oil spill risks in the transpacific navigational routes including the Gulf of Alaska and Unimak Pass. The Army Corps also, has not yet required a site-specific EIS at the Port of Morrow terminal at Boardman, and permit approvals there may go forward after an even more truncated environmental analysis.

The groups called on the Corps to consider effects on global consumption of coal due to the effect of the operation of export terminals on international market prices, and resulting increased greenhouse gas emissions and air pollution impacts from coal combustion in China, including mercury and other contaminant deposition in Pacific Northwest waters.

"If America plans to subsidize coal exports, it would have a real impact on China. It is important that the Army Corps conduct a study that accounts for all of the impacts of Northwest coal exports—and that includes us," said Hao Xin, executive director, Green Zhejiang, Hangzhou Eco-Culture Association, Green More, Xiacheng Dist., Hangzhou, China.