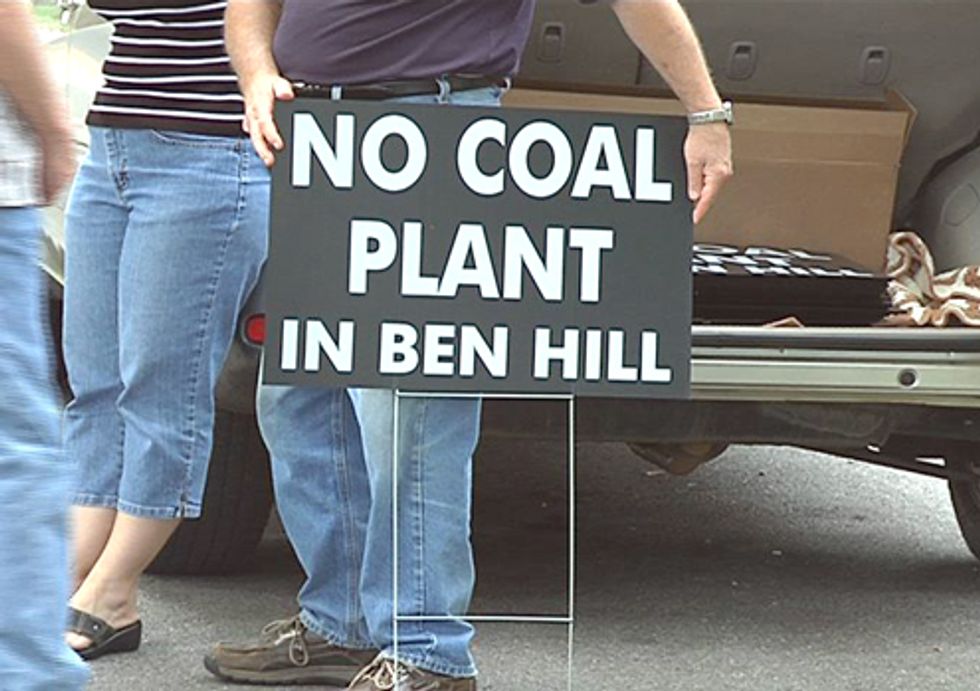 Clean air advocates and environmental groups won a victory today when Power4Georgians (P4G), the only company trying to develop expensive new coal plants in Georgia, agreed to cancel the proposed Ben Hill coal-fired power plant. The company also agreed to comply with critical new safeguards against mercury pollution and invest $5 million in energy efficiency and renewable projects. The Sierra Club, the Fall Line Alliance for a Clean Environment (FACE), Southern Alliance for Clean Energy (SACE), and the Ogeechee Riverkeeper, represented by the Southern Environmental Law Center and GreenLaw, successfully challenged the permit for Plant Washington issued by the Georgia Department of Environmental Protection, and the settlement agreement is pending approval by each group. If built, Power4Georgians’ Plant Washington will have to meet the much more protective emission standards for mercury and other air toxins.

“Before we challenged the permit, Plant Washington was going to send forty times more mercury into our air and water each year, endangering our most vulnerable citizens,” said Colleen Kiernan, director of the Georgia Chapter of the Sierra Club. “We knew the law was on our side, we challenged Power4Georgians, and now Georgia’s air, water and people will be protected.”

Plant Washington now faces its steepest challenge yet, as U.S. Environmental Protection Agency (EPA) recently announced the carbon pollution rule for new coal-fired power plants, which will require new coal plants to reduce or capture their harmful carbon emissions. Power4Georgians had not considered carbon capture technology in the original Plant Washington proposal. In the rule, EPA identified Plant Washington as a potential “transitional” source whereby it could be exempt from the rule if there is a final permit and construction commences within a year of when the rule is published. The carbon pollution rule is expected to be published later in April.

“Plant Washington continues to lack a complete and legally effective permit that authorizes construction, and it won’t have one until the mercury permit amendment is issued, which will take another 30 days at least,” said Kurt Ebersbach, staff attorney with the Southern Environmental Law Center. “Based on filings by Power4Georgians in this case, it is clear that they have not done engineering, selected the boilers, lined up investors, or met any of the criteria that EPA is looking at to exempt a new source from complying with the carbon pollution rule.”

Power4Georgians is a consortium of four remaining electric membership cooperatives in Georgia, after six additional co-operatives left the consortium citing cost concerns. Cobb EMC, the largest and most prominent investor in P4G, withdrew funding and support for the consortium and the Plant Washington proposal in January of this year, leaving a very small base of ratepayers to shoulder the full $2.1+ billion cost of building the plant. Financial experts have questioned whether the current membership of Power4Georgians is sufficient to finance the plant’s construction.

“We’ve fought this plant from day one, because this major new source of air pollution will also guzzle up to 16 million gallons of water a day from our already stressed water resources,” said Katherine Helms Cummings, director of the Fall Line Alliance for a Clean Environment and Washington County resident. “It’s doubtful that Plant Washington will be built. The demand for electricity just isn’t there, and since the plant was announced over four years ago, cheaper electricity from natural gas and renewables is now readily available. Still, any proposed coal plant must do the maximum to reduce toxic pollution and risk to Georgians. Nothing less is acceptable.”

“Today’s agreement is great news for Georgia ratepayers, who will now avoid $2.3 billion in costs from Plant Ben Hill and reduce their monthly utility bill through new energy efficiency programs,” said Amelia Shenstone of the Southern Alliance for Clean Energy. “It also sends a message to those who continue to support Plant Washington: you can’t ignore the public health costs of dirty energy sources any more. We hope the remaining EMCs involved in Plant Washington will look into cleaner, cheaper ways to provide electricity to their members.”

The cancellation of Plant Ben Hill marks 168 total coal plant proposals cancelled across the U.S. due to changing market conditions, legal challenges and local opposition. In December 2011, New Jersey-based LS Power cancelled the Plant Longleaf coal plant proposal, which would have been built in Early County, Ga. Further, 106 coal plants have been scheduled for retirement, including two units at Plant Branch near Milledgeville that were recently approved by the Georgia Public Service Commission.

“The cancellation of Plant Ben Hill is just one more sign that coal is declining,” says Justine Thompson, attorney for GreenLaw that has been working with the community adjacent to the proposed Plant Ben Hill to oppose the construction of the plant. “Georgia has a promising future—but to be a serious player in the global economy while also ensuring that we have clean air and water, Georgia needs to embrace energy efficiency and more renewable sources of energy. We are now moving one step closer to that goal.”