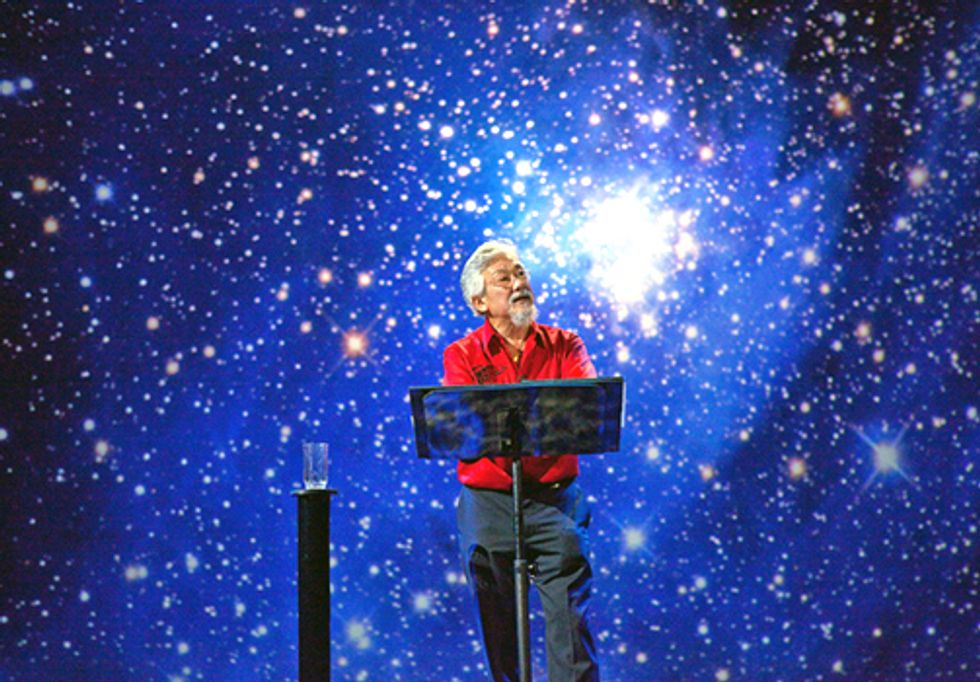 In my line of work it's easy to harp on what's wrong. Problems with our water, air, food and land are vast. It seems two steps forward is always followed by ten steps back. We're constantly fighting for protection of natural resources and trying to show that we can live in harmony with nature instead of destroying it.

Yesterday, as I was reading Janine M. Benyus's book Biomimicry: Innovation Inspired by Nature, I was reminded of the work of scientist Dr. David Suzuki and the film I've been wanting to see, Force of Nature.  So I downloaded the movie, and, as I anticipated, I was awe-inspired by Suzuki's life's work and his ability to inform others on the importance of respecting the natural world and preserving what's vital to our survival.

Force of Nature weaves together scenes from the places and events that shaped Suzuki's life with a filming of his Last Lecture, which he describes as "a distillation of my life and thoughts, my legacy, what I want to say before I die."

Early in the film Suzuki says, "The human relationship with the planet has transmogrified. We have become a force like no other species in the 3.8 billion years that life has existed on Earth and the accession to this position of power has happened with explosive speed."

He describes exponential growth which has resulted in the human population exceeding seven billion and "as the most numerous mammal on the planet, we now have a very heavy ecological footprint. It takes a lot of land, air and water to support us and keep us alive."

He discusses how a global economy exploits the planet's natural resources to keep up with ever-expanding consumer demand. Humans are "single-handedly altering the biological, physical and chemical features of the planet in a mere instant of cosmic time."

In reference to the urgent challenge of climate change, he says, "Human activity has become so great that our profligate use of fossil fuels is altering the chemistry of the atmosphere with potentially catastrophic effects for all of humankind."

I could continue detailing the important facts Suzuki outlines in his Last Lecture, including how forests are vital to stabilizing our weather and how in less than a century 80 percent of the forests have been fragmented and lost. But, I'll leave the rest of Suzuki's insights for you to hear when you get the chance to watch the film.

Ultimately, one of our biggest mistakes is the rush to exploit resources without regard for the consequences or the long-term costs. What takes nature billions of years to create can be destroyed in just minutes with heavy machinery.

As I continue to read Benyus's Biomimicry: Innovation Inspired by Nature, and Michael E. Porter and Mark R. Kramer's Harvard Business Review article, Creating Shared Value,—prerequisite reading material to be part of the Great Lakes Biomimicry Collaborative, a new economic development strategy for Northeast Ohio—I have hope for the future.

Hope that we can restructure our economy by embracing a biocentric viewpoint that values our natural resources and considers the lasting impacts of our actions.

Suzuki says it best:  "I believe that we are capable of even greater things—to rediscover our home, to find ways to live in balance with the sacred elements, and to create a future rich in joy, happiness and meaning that are our real wealth ... All it takes is the imagination to dream it and the will to make the dream reality."