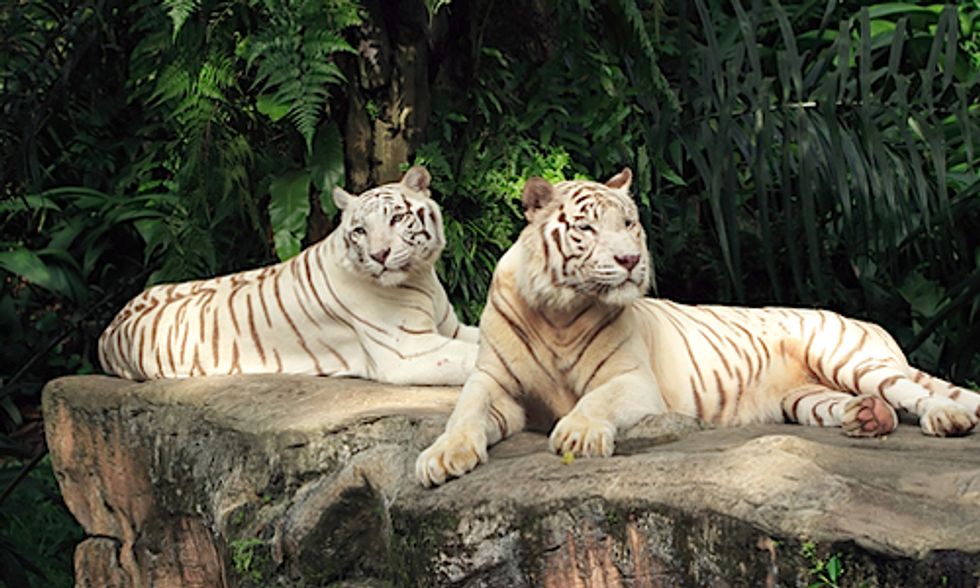 Although the wild cats on display in zoos seem to be the kings and queens of their exhibits, the reality of their lives in captivity is far from royal.

Illegal poaching, trophy hunting, retaliative persecution and habitat loss subjects wildlife species to extinction or captivity, and has brought populations of wild cats in the world to staggering lows.

Pair of white tigers in a zoo in Singapore.
Photo courtesy of Shutterstock

Many zoos have made efforts to save wild cats and stimulate procreation, but the threat is the largest for the white tiger and the white lion species. Despite the educational goals and hopeful life-saving conditions of zoos, containment of these white cats has become inhumane and harmful due to selective inbreeding for the sake of profit, not protection.

In over a century, 97 percent of all tigers have been lost, leaving as few as 3,200 in the wild today, the World Wildlife Fund (WWF) states. Resources to safeguard and protect the habitats of tigers are limited, and poaching remains pervasive even within countries that have protection laws, such Cambodia, China, Laos and Vietnam. In Central and West Africa, lions are now classified as an endangered species and are extinct in 26 countries, according to wild cat conservation group, Panthera.

Exhibitors and breeders favor white tigers and lions because they are so rare. A subspecies of the orange Bengal tiger, the white tiger’s fur coat is the result of a recessive gene that must be carried by both parents.The Global White Lion Protection Trust states the fur of white lions is due to a genetic marker that has not even been identified yet.

Though beautiful, their bright coats make it difficult to camouflage themselves from animal predators and poachers in the wild, further exacerbating their struggle for survival.

At zoos, their white coats draw visitors and bring in money. To ensure the presence of African and Asian white cat exhibits, many zoos actively inbreed white lions and white tigers. However, this inbreeding has resulted in genetic deformities among offspring in both species.

Despite these abnormalities, according to The Wildcat Sanctuary, zoos continue to inbreed for financial gain rather than for the species’ survival. Out of a litter of cubs, certain offspring are selected to remain in the zoo, while nearly half of those born with deformities or without a pure, white coat are often euthanized or neglected.

In June 2011, the American Zoological Association (AZA) finalized their ban on breeding captive white cats for their member zoos. Its policy states:

Breeding practices that increase the physical expression of single rare alleles (i.e., rare genetic traits) through intentional inbreeding, for example intentional breeding to achieve rare color-morphs such as white tigers, deer and alligators, has been clearly linked with various abnormal, debilitating, and, at times, lethal, external and internal conditions and characteristics … Therefore such practices are not in adherence with AZA’s Board-approved Policy on the Presentation of Animals.

When it comes to the conservation of the white wild cat species, the association holds that captive species should be managed with possible re-introduction in mind, not intentionally kept so the zoo can profit.

Kingpin Behind Bars for Poaching Chimps in Africa