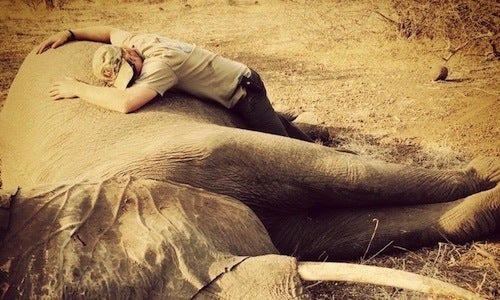 Prince Harry has released personal photographs from his three months working as a wildlife conservation volunteer in Africa this summer. The 31-year-old is visibly moved in many of the photos, such as this one where he’s face down and stretched across a majestic elephant.

— The Duke and Duchess of Cambridge (@KensingtonRoyal) December 2, 2015

“After a very long day in Kruger National Park, with five rhinos sent to new homes and three elephants freed from their collars—like this sedated female—I decided to take a moment,” the Prince Harry said about the photo.

“I know how lucky I am to have these experiences, but hearing stories from people on the ground about how bad the situation really is, upset and frustrated me. How can it be that 30,000 elephants were slaughtered last year alone? None of them had names, so do we not care? And for what? Their tusks? Seeing huge carcasses of rhinos and elephants scattered across Africa, with their horns and tusks missing is a pointless waste of beauty.”

Prince Harry worked right alongside rangers responding poaching attacks, according to The Guardian. His pictures are from Tanzania, South Africa, Botswana and Namibia.

He said that Kruger National Park in South Africa, one of Africa’s largest game reserves, “is one of the most beautiful places on earth. But in recent years it has become a major killing field.”

Prince Harry shares his story behind this photograph of 'Hope the rhino' on Instagram: https://t.co/xJrWrj6opT pic.twitter.com/4xt4rxGK2k

— The Duke and Duchess of Cambridge (@KensingtonRoyal) December 2, 2015

“Many people will have heard of Hope, a young female black rhino that was brutally wounded by poachers,” Harry, the fifth in line to the British throne, says about the photo above. “This was the second operation to try to save this animal’s life.

“Some poachers use a dart gun and tranquilize the animal so as not have to fire a shot that would be heard. They then hack their face off while the animal is paralysed. Local communities saw her stumbling through the bush and then alerted the authorities. Thanks to Dr William Fowlds and his team, Hope survived and is making a speedy recovery.”

“In recent years Kruger has also become a major killing field,” Prince Harry said in a speech with Sky News.

“The numbers of rhinos poached in South Africa has grown by nearly 500 percent in just five years, with most of these occurring in Kruger,” he continued. “Already this year 1,500 rhinos have been killed in this country. That is four every day.”

He said that if current poaching rates continue there will be no wild African elephants or rhinos left by the time children born this year—like his niece, Charlotte (who is 7 months old)—turn 25.