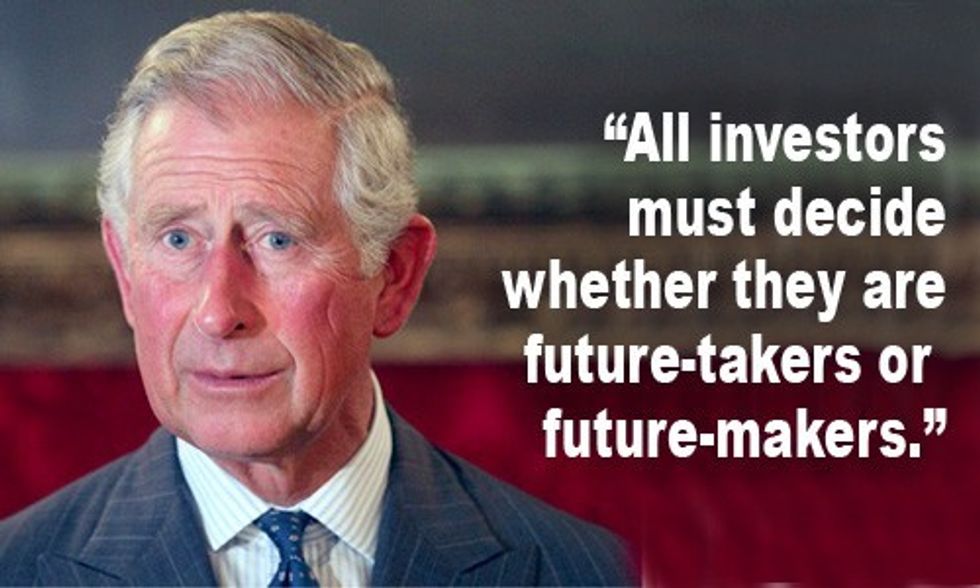 The heir to the British throne, speaking to a gathering of some of the world’s leading investors controlling billions of dollars’ worth of funds, said it’s vital that finance markets send a strong signal to politicians about the need for a global agreement on climate change.

Prince Charles said global warming is an increasing source of risk to the financial community, and investing in projects that will help the world stay within a 2˚C rise in temperatures over pre-industrial levels need not hurt investment returns.

“All investors must decide whether they are future-takers or future-makers,” he said.

Successive speakers at the meeting, held in the ornate surroundings of the City of London’s Guildhall, said that investors had to realize that a fundamental shift is taking place in the global economy—away from fossil fuel-led growth and towards a less carbon intensive, more sustainable future.

Investors were told they ignored this shift at their peril. By continuing to put money into fossil fuels, fund managers were placing their clients’ money at risk. Oil firms, even before the drop in oil prices, were delivering diminishing cash returns.

“We collectively sleep-walked into a global financial crisis,” said one investment fund manager. “We have no excuse for sleeping our way into a climate change crisis.”

Sarah Butler-Sloss, a co-founder of Europeans for Divest/Invest, a campaign that encourages individual investors, philanthropic organisations and pension funds to divest from fossil fuels, said that more than US$2.5 trillion of financial assets had so far been moved out of fossil fuels into renewables and other sectors.

The divestment campaign is expanding fast and enjoying a huge groundswell of grass roots support, Butler-Sloss said. “There will only be one eventual winner in this contest.”

Many universities, religious groups and other institutions have been among thosemoving their money out of fossil fuels.

In 2013. Norway, which has one of the world’s biggest sovereign wealth funds, announced it was taking its investments out of heavily carbonised sectors.

James Cameron, chairman of the UK’s Overseas Development Institute, and a leading figure in encouraging investments in low-carbon industries, said few had anticipated the pace of change away from fossil fuels in recent years, highlighting what he described as the phenomenal growth in renewable energy.

There are great investment opportunities, Cameron said.  “This is not some kind of green sand pit for investors to play around in. This [decarbonised economy] is a huge investment space.”

Although the assembled investment community seemed receptive to reconsidering their investment strategies, there were those who questioned the relative scale of the divestment campaign and speed of the shift to a decarbonised economy.

The London stock exchange, one of the world’s biggest share markets, is still dominated by fossil fuel-related stocks, which account for 30 percent of the total value of the main index.

Some fund managers expressed concern about what they saw as a lack of investment products in the low carbon sector. Others said there was still not enough expertise about renewables and other decarbonised projects among firms managing investment funds.

“The fossil fuel companies have immense financial power and the lobbyists that support them are still very strong,” said one of those at the meeting.

“Big changes in the direction of investments are taking place, but it’s the pace of change that’s the important thing.

“And when you talk about the challenge of climate change, time is not on the world’s side.”