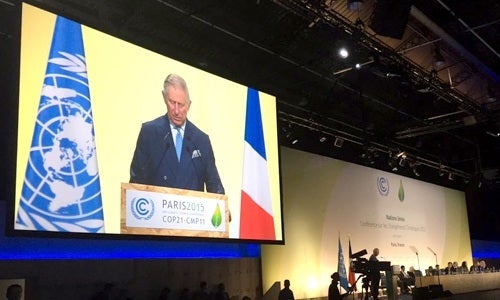 "In damaging our climate we become the architects of our destruction." Watch Prince Charles' opening speech #COP21https://t.co/assRpnTEmT

Philippe Joubert, chair of The Prince of Wales’s Corporate Leaders Group, said: “The CLG‘s long-standing efforts to put a price on carbon, including most recently working with the World Bank through the Carbon Pricing Leadership Coalition, will soon deliver results.

“It doesn’t make sense that, at the same time, governments artificially deflate the cost of coal, oil and gas, the primary cause of GHG emissions. Fossil fuel subsidies must be ended to stop this contradiction and enhance a real transition to low carbon energy.”

The announcement was made shortly after Prince Charles addressed the COP21 conference. He said: “In damaging our climate we become the architects of our own destruction. While the planet can survive the scorching of the Earth and the rising of the waters, the human race cannot. The absurd thing is we know exactly what needs to be done.”

The UK was among the countries to sign the communiqué. David Cameron, the British prime minister, is due to speak at the COP21 conference in Paris later today. DeSmog UK earlier this month that the UK provides £6 billion in subsidies to fossil fuels.

Key said: “Fossil fuel subsidy reform is the missing piece of the climate change puzzle. It’s estimated that more than a third of global carbon emissions, between 1980 and 2010, were driven by fossil fuel subsidies.

“Their elimination would represent one seventh of the effort needed to achieve our target of ensuring global temperatures do not rise by more than 2°C. As with any subsidy reform, change will take courage and strong political will, but with oil prices at record lows and the global focus on a low carbon future—the timing for this reform has never been better.”

According to the UNFCCC statement: “An unprecedented coalition of close to 40 governments, hundreds of businesses and influential international organisations has called today for accelerated action to phase out fossil fuel subsidies, a move that would help bridge the gap to keep global temperature rise below 2°C.”

The communiqué calls on the international community to increase efforts to phase out perverse subsidies to fossil fuels by promoting policy transparency, ambitious reform and targated support for the poorest.

Figueres said in accepting the Communiqué: “These subsidies contribute to the inefficient use of fossil fuels, undermine the development of energy efficient technologies, act as a drag on clean, green energy deployment and in many developing countries do little to assist the poorest of the poor in the first place.

“The huge sums involved globally could be better spent on schools, health care, renewable energies and building resilient societies. The current, very low oil prices are a good opportunity to really get going on this issue.”

Stefan Löfven, Prime Minister of Sweden, said: “History will prove fossil fuel to be a dead end. Sweden will be amongst the first fossil free welfare nations of the world. And eliminating fossil fuel subsidies is an important step on this path.”

Hakima El Haite, Environment Minister of Morocco, candidate for the presidency of COP22, said: “Not only do fossil fuel subsidies put a strain on government coffers but they also don’t help the poorest of society.”