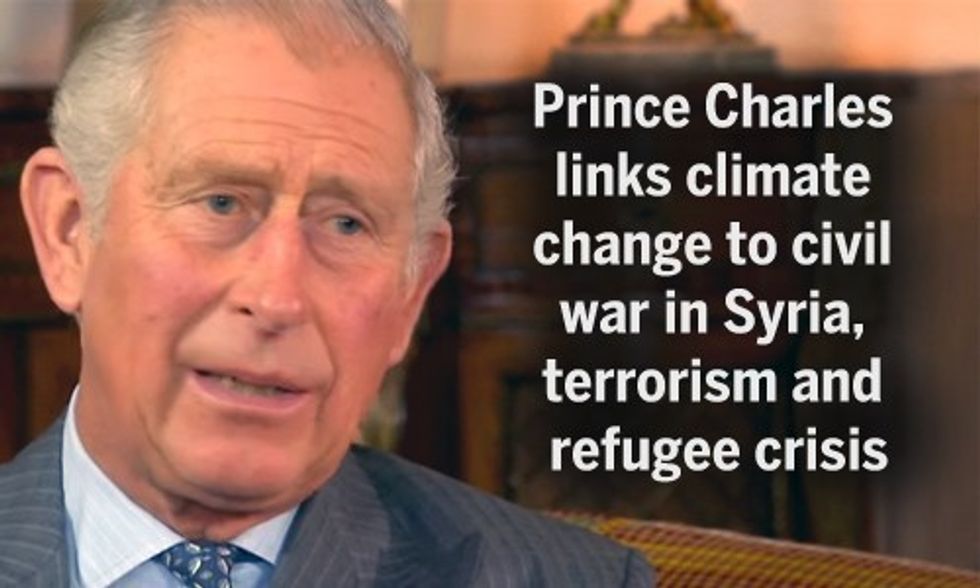 England's Prince Charles told Sky News in an exclusive interview that climate change was a root cause of the civil war in Syria, terrorism and the ongoing refugee crisis in Europe. Prince Charles, who has been outspoken on the issue of climate change and sustainability for the last four decades, will deliver a keynote address at the COP21 Paris climate talks next week.

"We're seeing a classic case of not dealing with the problem, because, I mean, it sounds awful to say, but some of us were saying 20 years ago that if we didn't tackle these issues, you would see ever greater conflict over scarce resources and ever greater difficulties over drought, and the accumulating effect of climate change, which means that people have to move," he said in the interview, which will air tonight and was filmed three weeks ago, before the Paris attacks. "And, in fact, there's very good evidence indeed that one of the major reasons for this horror in Syria, funnily enough, was a drought that lasted for about five or six years, which meant that huge numbers of people in the end had to leave the land."

When asked if there was a direct link between climate change, conflict and terrorism, Prince Charles said: "Absolutely ... It's only in the last few years that the Pentagon has actually started to pay attention to this. I mean, it has a huge impact on what is happening."

"We never deal with the underlying root cause which regrettably is what we're doing to our natural environment," he said, noting the gravity of the crisis. "I mean the difficulties in 2008 with the financial crash—that was a banking crisis. But we're now facing a real possibility of nature's bank going bust."

A U.S. military report from last year called climate change a "catalyst for conflict" and a "threat multiplier." President Obama has said repeatedly that "no challenge poses a great threat than climate change, and it's an "immediate risk to our national security."

As Secretary of State, John Kerry has made climate change a major priority not simply because it's a threat to the environment," he said in a recent speech. "It’s because by fueling extreme weather events, undermining our military readiness, exacerbating conflicts around the world, climate change is a threat to the security of the United States and indeed to the security and stability of countries everywhere.”

And most recently, Sen. Bernie Sanders came under fire in the last Democratic primary debate, which took place just a day after the Paris attacks, for saying that "climate change is directly related to the growth of terrorism." Even after being mocked by conservative media and Democratic operatives alike, Sanders held fast to his claim.