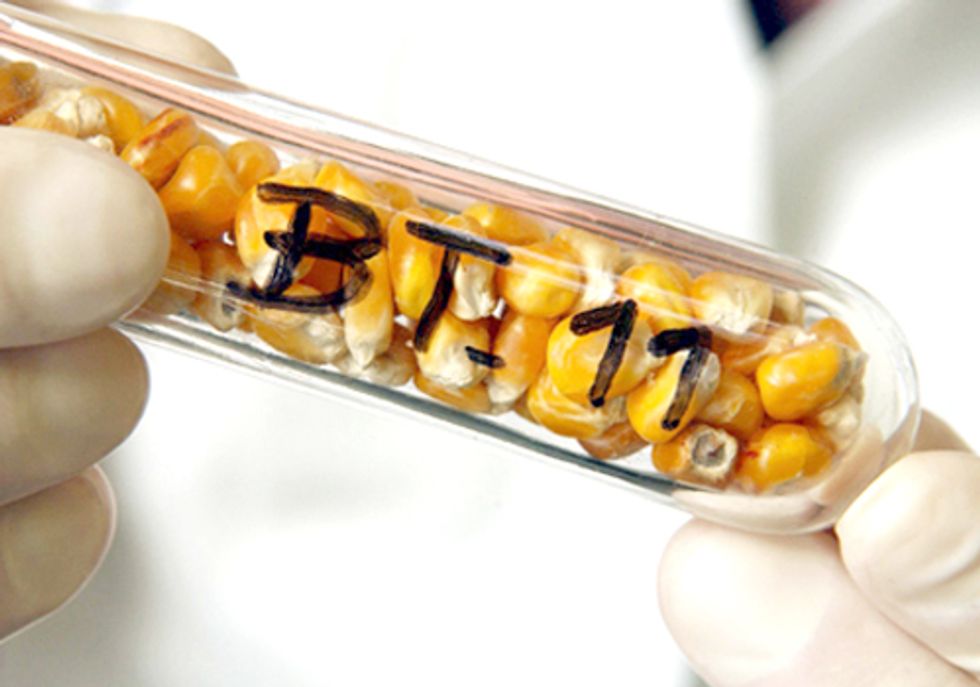 “Walmart is starting to feel the heat from consumers who don’t want this unlabeled GE corn in their grocery carts, so they are releasing public statements and telling customers that they have no current plans to carry the biotech corn,” said Wenonah Hauter, executive director of Food & Water Watch. “But until the retail giant sends a clear message to its supply chain that it will not buy this GE sweet corn, consumers have no way of knowing whether or not Walmart’s corn is GE free, and those of us who prefer to avoid GE food—including the half-million people who signed this petition—will purchase our groceries elsewhere.”

Public opinion polls done by Consumer Reports and others show that a majority of consumers asked would not eat genetically modified food and nearly all—95 percent—are insistent that GE food must be labeled, at minimum, so they can make informed choices. As the country’s largest grocery retailer, Walmart sells $129 billion worth of food a year, giving it unmatched power in shaping the food supply chain. If Walmart refuses to stock Monsanto’s GE sweet corn, other retailers will likely follow suit and farmers won’t feel the economic pressure to plant the biotech seeds. To date, Trader Joe’s and Whole Foods Market have indicated they will not sell the GE corn.

“Consumers around the world are calling on Walmart to reject Monsanto’s toxic crop. The last thing we need is another unlabeled, potentially unsafe GE product hiding in plain sight at the nation’s largest food retailer,” said Taren Stinebrickner-Kauffman, executive director and founder of SumOfUs.

“We hope that Walmart food buyers hear the more than 200,000 CREDO members encouraging them to take a stand for consumer choice and against Monsanto’s unlabeled GMO corn,” said Elijah Zarlin, campaign manager of CREDO Action. “Walmart’s stated commitment to customer safety and satisfaction will definitely be called into question if they carry this untested, unlabeled sweet corn—not even giving their customers the choice to avoid the product.”

“Grocery companies are the last link in the chain before this corn reaches consumers and they have a financial incentive to keep this unlabeled GE sweet corn off their shelves because their customers won’t buy it,” said Andrew Kimbrell, executive director of The Center for Food Safety. “Two major retailers have already said they will not use Monsanto’s new corn. If they can do it, so can Walmart.”

“Walmart has been getting an earful from hundreds of thousands of Americans who don’t want risky genetic corn experiments,” said Charles Margulis, food program coordinator at the Center for Environmental Health. “This untested, unlabeled corn has no place on Walmart shelves. We expect swift action by the world’s largest retailer to protect their consumers’ right to safe food choices.”

On March 17, dozens of live events are being planned in communities across the country including New Jersey, Colorado, New Mexico, Pennsylvania, Minnesota, Oregon, Iowa and California, as well as online social media actions targeting Walmart properties.

In addition to the nearly 500,000 petition signatures, the campaign that began on Jan. 11 has generated significant support from people across the country who are opposed to untested, unlabeled and potentially unsafe GE food. On Feb. 8, more than 3,300 phone calls were made to Walmart’s customer service line and between Feb. 22 and 23, Food & Water Watch activists delivered more than 75,000 petitions to more than 100 Walmart stores across the country.

SumOfUs.org is a global movement of consumers, investors, and workers all around the world, standing together to hold corporations accountable for their actions and forge a new, sustainable and just path for our global economy.

CREDO Action has 2.7 million members across the U.S. who fight for progressive change and raise money for organizations like Food Democracy Now! and the Organic Consumers Association. Since 1985, CREDO and its membership have donated over $65 million to progressive causes.

The Center for Food Safety is a national, non-profit, membership organization founded in 1997 to protect human health and the environment by curbing the use of harmful food production technologies and by promoting organic and other forms of sustainable agriculture. The Center for Food Safety’s True Food Network is a national grassroots network with more than 200,000 members where concerned citizens can voice their opinions about critical food safety issues, and advocate for a socially just, democratic, and sustainable food system. Find it on the Web by clicking here and here.

The Center for Environmental Health protects people from toxic chemicals and promotes business products and practices that are safe for public health and the environment.

Corporate Accountability International (formerly Infact) is a membership organization that has, for the last 35 years, successfully advanced campaigns protecting health, the environment and human rights.