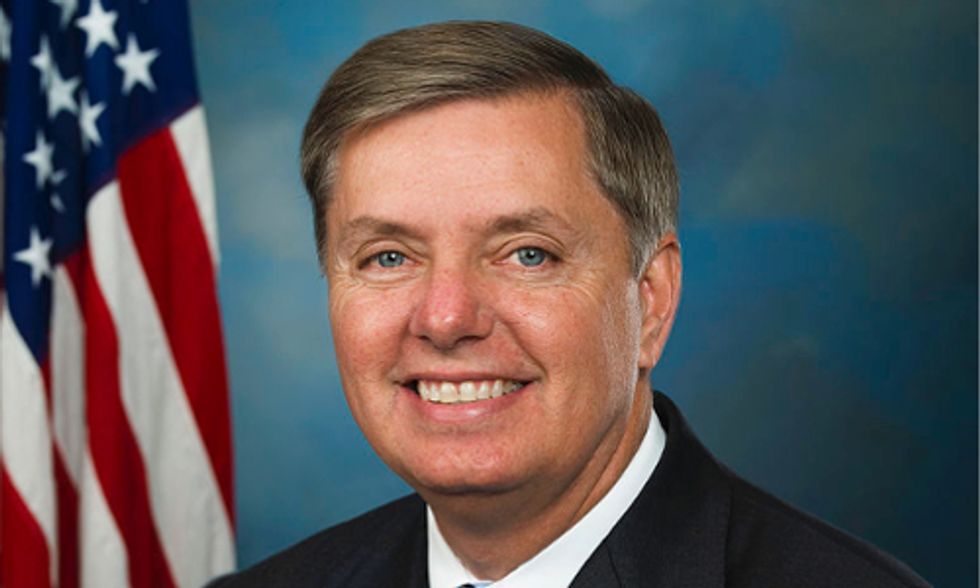 South Carolina Senator Lindsey Graham, a Republican once perceived as a moderate who favored bipartisan lawmaking back when that was still a thing in the GOP, has been talking recently about how his party needs a real climate change policy. And with stories rife this morning that Arizona Senator and former presidential candidate John McCain is urging him to run for president in 2016, Graham is going to have to figure out how to rein his party's climate deniers.

But with incoming Senate majority leader Mitch McConnell promising to fast-track the Keystone XL pipeline and gut the U.S. Environmental Protection Agency (EPA), it seems like they may actually have one—just not one that will help Graham's cause, or the climate. And a bill offered up by departing Texas Congressman Steve Stockman, who did not run for reelection, adds fuel to the climate-denier fire.

You may remember Stockman as the Congressman in the Jon Stewart climate denier segment who grilled a testifying scientist about why climate change predictions did not take into account "global wobbling," something that has nothing to do with the climate. His new bill is more of the same. Stockman has introduced H.B.  5718 or the "Stockman Effect Act," (its official name in the Congressional Record) "to study the effect of the Earth's magnetic field on the weather."

Alas, Congress is not a scientific body and Stockman is not a scientist. (He was formerly a computer salesman). And there is no "Stockman Effect," at least none relating the the climate.

According to National Journal reporter Jason Plautz, "The bill doesn't explicitly mention global warming, but would put Congress on record as saying that a 'decrease in magnetic fields could impact global temperatures' and instructs the director of the National Science Foundation to commission a study on the impact a shift in the Earth's magnetic field could have on the weather. Scientists contacted by National Journal said they weren't aware of a "Stockman Effect" related to geophysics or climate change."

"But scientists say that the long-term changes in the magnetic field make it unlikely that it's causing the rapid warming," wrote Plautz. "Bob McPherron, a professor of space physics at the University of California Los Angeles, said the possible link was 'very tenuous' and that most of the science behind it is not well understood. A 2011 NASA publication noted that polarity reversals are 'the rule, not the exception' and said that fossils from the last reversal 780,000 years ago showed no change to plant or animal life or glacial activity."

Former South Carolina congressman Bob Inglis, who served in the House with Graham in the late ’90s and early ’00s and later founded the Energy and Enterprise Initiative to take on the daunting task of convincing conservatives to act on climate change, told Roll Call he agrees with Graham.

"If conservatives plan on winning the White House back, we’ve got to have something on the menu that addresses this felt need for action on climate,” he said.