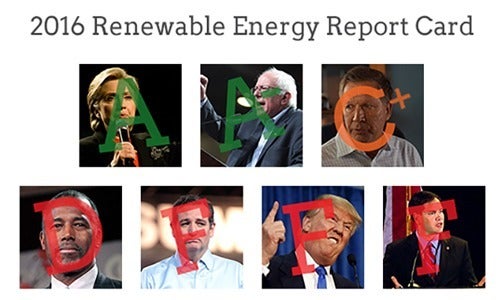 Renewable energy is a particularly hot issue in this year’s presidential election. At the end of 2015, the U.S. joined 195 other nations in signing a UN agreement that committed to an aggressive climate change reduction strategy. Additionally, the Obama Administration is now in the process of defending its much-discussed Clean Power Plan to reduce greenhouse gas emissions. Congress also extended solar and wind tax credits and lifted the U.S. oil export ban in the 2016 spending bill—two controversial policies for today’s candidates with their eye on the presidency. 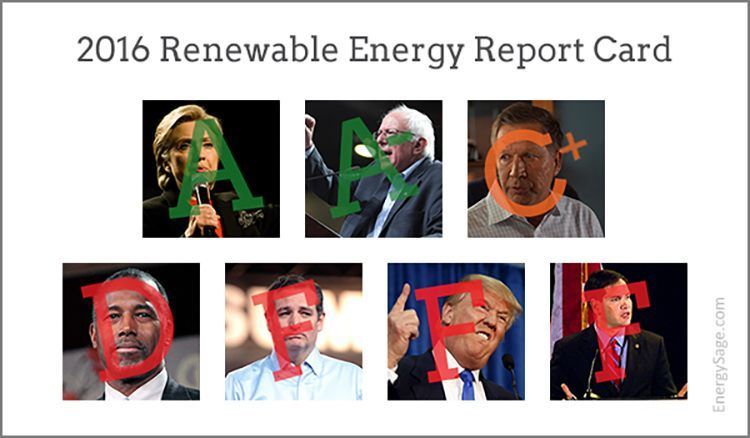 EnergySage graded the 2016 presidential candidates on their support of solar, wind and other forms of renewable energy. Our key criteria include:

1. Does the candidate believe in climate change?

2. Has the candidate published an energy plan?

3. Does the candidate’s energy plan have specific targets for renewable energy development or energy efficiency initiatives?

4. Does the candidate support incentives for renewable energy?

5. Does the candidate support expanding oil and gas production?

6. Does the candidate want to defund or eliminate government agencies like the U.S. Environmental Protection Agency and the Department of Energy?

With all of these criteria in mind, here’s how the 2016 candidates measure up. 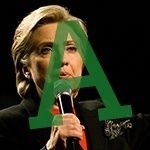 Former Sec. of State Clinton’s climate change plan proposes to reduce U.S. greenhouse gas emissions more than 80 percent by 2050. She presents two strategies to achieve this goal: expand solar energy across the U.S. to 140 gigawatts (the equivalent of installing solar energy systems on 25 million homes) and to power every home in America with renewable energy by 2026. She supports the expansion of renewable energy on federally-owned lands and infrastructure and would restrict, but not eliminate, development of fossil fuel resources on public lands. 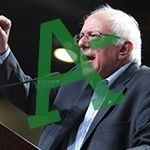 Sen. Sanders has a plan to reduce carbon pollution more than 80 percent by 2050, largely through a tax on carbon and investments in energy efficiency, and wind and solar power. He supports banning all future fossil fuel leases on public lands and would cut subsidies for fossil fuel producers in favor of supporting renewable energy development. However, because he has not detailed specific targets for renewable energy growth, we grade him slightly lower than Clinton. 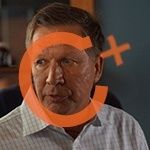 In his energy plan, Ohio Gov. John Kasich supports increasing U.S. energy production from all sources, including alternatives and renewables, as well as “removing barriers” for the development of advanced energy technologies. His plan also supports energy efficiency efforts, stating, “the cheapest, cleanest energy is the energy we never have to produce.” 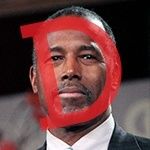 Dr. Ben Carson’s proposed energy policy doesn’t outline specific climate change or renewable energy measures. While he has called global warming “irrelevant,” he has advocated for an all-of-the-above approach to energy resources, including expanding renewable energy sources wherever they are economically feasible. He also calls for the elimination of all subsidies for energy markets. 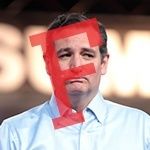 The extent of Sen. Ted Cruz’s energy platform is the elimination of the Department of Energy, as well as multiple programs at the Environmental Protection Agency. His energy policy calls for the abolishment of all energy subsidies, but does not oppose renewable energy resources to the extent that they are economically competitive. (Oddly, it is worth noting that several of the “government funded failed companies” listed on Sen. Cruz’s website, including First Solar and SunPower Corporation, are successful publicly-traded companies). 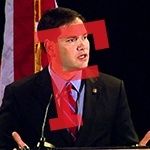 Sen. Marco Rubio’s proposed energy policies would expand fossil fuel energy development in the U.S. both on land and offshore and would eliminate tax credits and policies that support renewable energy development. While he does believe that climate change is occurring, he doesn’t believe that it is caused by human activities—this stance runs counter to the scientific community and assures his failing grade. 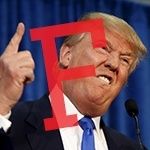 Donald Trump has not proposed an energy policy. To the extent that he has commented publicly on energy issues, he supports expanding natural gas and oil resource development in the U.S. Oddly, he also believes that the Chinese invented the concept of global warming “to make U.S. manufacturing noncompetitive.” Like Senators Rubio and Cruz, we grade Mr. Trump as an F.