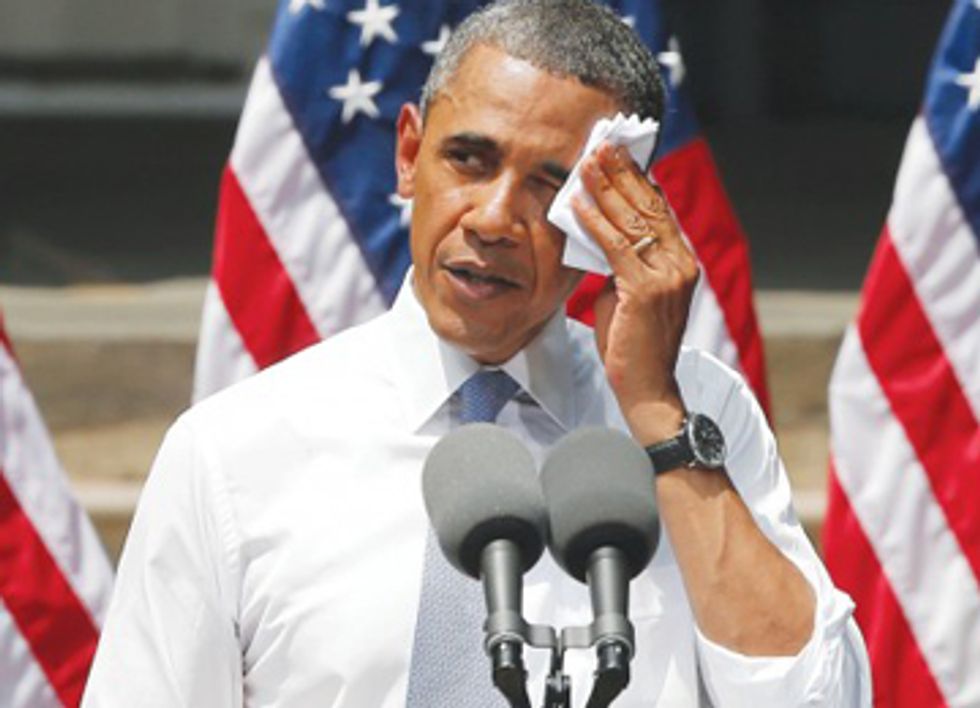 In June, after more than four years as president, President Obama finally proposed a climate action plan for America. True to form, the president gave an eloquent speech, with strong words for those still in denial about the severity of the crisis we face: "We don't have time for a meeting of the Flat Earth Society."

Unfortunately for all of us, the blueprint he presented is more PR than plan, and has zero chance of stabilizing the climate. To the contrary, it promises even more climate chaos by promoting fracking, mountaintop removal coal mining, offshore and Arctic oil drilling and tar sands exploitation. It also threatens future generations with the specter of more radioactive nuclear power.

President Obama during his climate speech at Georgetown University on June 23.

The president opened his speech with a poetic tribute to the Apollo program, a generational mission championed by President John F. Kennedy more than half a century ago. But no comparison can be made between Kennedy's bold vision and Obama's timid plan. At the moment in history when the moral urgency of the global climate crisis demands a U.S.-led green energy "moon shot," President Obama offers us a cloud shot. Are we really supposed to take seriously the anemic goal of cutting carbon emissions 17 percent by 2020 when experts like Earth Policy Institute's Lester Brown have shown that nothing short of 80 percent carbon cuts by 2020 may be enough to save civilization?

Instead of calling out Obama on his hollow words, big national environmental groups—many with deep ties to the Democratic Party establishment and the Obama White House—fell over themselves congratulating the president on his speech. This, despite the fact that neither of America's two corporate political parties has any intention of giving up their oil-soaked campaign contributions to take on the fossil fuel lobby.

Jon Queally, writing for Common Dreams, posed the right question: "With a showering of praise from 'big green' groups like Natural Resources Defense Council, Sierra Club and Environment America—the last of which decided to launch an expensive 'thank you' TV ad for the president—is it possible that the environmental movement is easing off the pressure at exactly the moment they should be holding Obama's feet more firmly to the fire?" This is exactly what many of these same groups did when the president postponed until after the election a decision on Keystone XL's northern leg permit, only to see him turn around and fast-track the pipeline's southern leg. Instead of learning from history, they repeat it.

With the aforementioned as context, let's look at some of what the President actually said in his speech and how his words fail to translate into the action needed to help stabilize the climate in the short time humanity has left to act.

President Obama: "We should strengthen our position as the top natural gas producer because, in the medium term at least, it not only can provide safe, cheap power, but it can also help reduce our carbon emissions. We're going to partner with our private sector to apply private sector technological know-how in countries that transition to natural gas."

Real World Translation: The President calls natural gas "clean," despite knowing it's a major greenhouse gas emitter. He calls natural gas "safe," when the known dangers of fracking are causing communities across America to rise up against the poisoning of their local water supplies. The President's plan would not only ramp up this dangerous technology domestically, but also export it overseas.

President Obama: "So the plan I'm announcing today will help us double again our energy from wind and sun."

Real World Translation: This sounds impressive until you realize the percentage of America's electricity currently generated by wind and solar power is in the single digits. The president's plan ensures that the vast majority of our energy will continue to be generated from burning dirty fossil fuels.

President Obama: "So today, I'm setting a new goal: Your federal government will consume 20 percent of its electricity from renewable sources within the next seven years."

Real World Translation: This is an example of the president's "cloud shot" mentality. It would be like Kennedy announcing a goal of flying one-fifth of the way to the moon. Two Swiss explorers just flew day and night across America in a 100 percent solar powered airplane. If they can accomplish that in the air, America can do it on the ground.

President Obama: "Allowing the Keystone pipeline to be built requires a finding that doing so would be in our nation's interest. And our national interest will be served only if this project does not significantly exacerbate the problem of carbon pollution. The net effects of the pipeline's impact on our climate will be absolutely critical to determining whether this project is allowed to go forward."

Real World Translation: Thanks to the president, the Keystone XL pipeline is already charging forward, with zero regard for carbon emissions or America's interests. In fact, the pipeline is now 90 percent complete in Texas and Oklahoma. If Obama does not intervene to prevent the last stages of its construction, Keystone will open the floodgates to climate killing tar sands by transporting toxic tar sands from Canada to Texas refineries by the end of this year. TransCanada will accomplish this—with or without the pipeline's northern leg—by connecting the southern leg of Keystone XL to the already built Keystone I.

Real World Translation: The President is promoting a revival of nuclear power while Japan's Fukushima Daiichi plant continues to leak deadly radiation more than two years after the Fukushima nuclear disaster began. Certainly he knows that 23 nuclear reactors in the U.S. use the same "Mark 1" reactor and containment design as Japan's crippled nuclear plant. His plan not only promotes more nuclear power in the U.S., but worldwide.

President Obama: "I'm directing the Environmental Protection Agency to put an end to the limitless dumping of carbon pollution from our power plants, and complete new pollution standards for both new and existing power plants."

Real World Translation: The president's directive sounds pretty good until you realize the U.S. Environmental Protection Agency is already required by law to establish carbon pollution standards for coal plants. The president also fails to call for an end to the barbaric practice of mining coal by blowing off the tops of the Appalachian Mountains.

President Obama: "Today, I'm calling for an end of public financing for new coal plants overseas—unless they deploy carbon-capture technologies, or there's no other viable way for the poorest countries to generate electricity."

Real World Translation: The President is actually saying we will continue to publicly finance new coal plants overseas if developing countries really need it, or if they are willing to deploy cost-prohibitive and unproven "clean coal" technologies (which are set to receive up to $8 billion in loan guarantees domestically under his plan).

President Obama: "But I want to be honest—this will not get us there overnight. It's going to take time for carbon emissions to stabilize."

President Obama: "So the question now is whether we will have the courage to act before it's too late. As a President, as a father, and as an American, I'm here to say we need to act. I refuse to condemn your generation and future generations to a planet that's beyond fixing."

Real World Translation: By promoting a plan that has zero chance of success, the President answers his own question: the action he is taking "as a President, as a father, and as an American" is anything but courageous and condemns "future generations to a planet that's beyond fixing."

President Obama: "I want to be clear—I am willing to work with anybody—Republicans, Democrats, independents, libertarians, greens—anybody—to combat this threat on behalf of our kids. I am open to all sorts of new ideas, maybe better ideas, to make sure that we deal with climate change in a way that promotes jobs and growth."

My Response: If the President is genuinely open to new ideas, I have one for him: treat this like the existential threat it truly is, and launch a wartime-like mobilization—similar to how the U.S. in 1942 restructured our industrial economy in a matter of months—to cut carbon emissions 80 percent by 2020. A green energy "moon shot" (i.e. a national goal of 100 percent renewable electricity by 2020) will generate many more times the jobs than his administration's irrational "all-of-the-above" energy policy.

If the President is truly willing to work with "anybody" to combat this threat, he should read the Green Shadow Cabinet's critique of how his climate plan falls "dangerously short." He may also want to consider the views of outspoken critics like author Chris Williams, who cites the President's "dismal domestic and international record on environmental issues—it was, after all, he who was the lead protagonist in wrecking the international climate talks in Copenhagen in 2009." He wrote this about Obama's speech: "It's hard to take someone seriously when that person has presided over the biggest expansion of the security state in U.S. history and relentlessly pursued government whistleblowers with unprecedented ferocity, when they say simultaneously in a climate speech that they are directing the Environmental Protection Agency to generate new standards for the regulation of existing power plants in 'an open and transparent way.'"

Simply put, President Obama's climate action plan is not even close. We need to get real. Humanity just reached the grim milestone of 400 parts per million (ppm) of carbon dioxide in the atmosphere and is now speeding towards dangerous and irreversible climate tipping points. We don't need pretty speeches. We need all hands on deck. It is time for the U.S. to launch an emergency mobilization to combat this mortal threat, before it is too late.