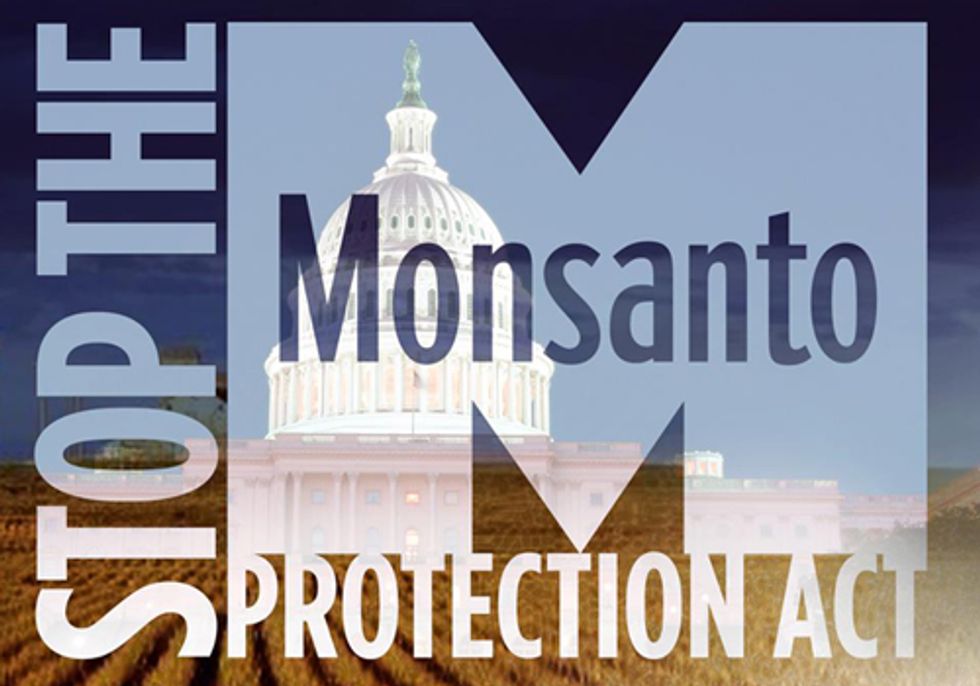 It is with great sadness and a heavy heart that we regret to inform you that late last night President Barack Obama signed H.R. 933, which contained the "Monsanto Protection Act" into law. This is an outrage that will not go unanswered.

While we are still waiting to hear from the administration all the final details, we understand at this time that Section 735, the Monsanto biotech rider, is intact.

President Obama knowingly signed the Monsanto Protection Act over the insistence of more than 250,000 Americans who signed an urgent letter asking that he use his executive authority to veto H.R. 933 and send it back to Congress to remove the Monsanto Protection Act from the bill. Regretfully, President Obama failed to live up to his oath to protect the American people and our Constitution.

Now that Congress has passed and President Obama has signed into law, the Monsanto Protection Act, Food Democracy Now! urgently requests that the President issue an executive order to support the mandatory labeling of genetically modified organisms (GMOs).

We want to thank everyone who made tens of thousands of calls to Congress and the White House and we understand that people are upset, but now is not the time to be quiet.

If leadership in Washington, DC can betray the public behind closed doors, it’s time that the American public gain the right to transparency about what they are eating and the food they’re feeding their families every day.

Not only is GMO labeling a reasonable and common sense solution to the continued controversy that corporations like Monsanto, DuPont and Dow Chemical have created by subverting our basic democratic rights, but it is a basic right that citizens in 62 other countries around the world already enjoy, including Europe, Russia, China, India, South Africa and Saudi Arabia.

In addition, mandatory labeling of GMO foods is something that President Obama promised while on the campaign trail in 2007 to Iowa farmers when he said on Nov. 10 in Des Moines: “Here’s what I’ll do as president ... we’ll let folks know whether their food has been genetically modified because Americans should know what they’re buying.”

It’s time that President Obama hold true to his campaign promise to Iowa farmers and the American people by issuing an executive order to label GMOs in our food products immediately. The American people need real leadership in Washington, DC, not more backroom deals by corporate lobbyists that subvert our democracy.

The passage of the Monsanto Protection Act is another sign of how out of touch Congress and the White House are with the sentiment of the America public. The insertion of the biotech rider in a backroom deal with corporate lobbyists and Senate leaders is a new low. Since losing a court case in 2010 to Center for Food Safety for the unlawful planting of GMO sugar beets, Monsanto and other biotech companies have been desperate to find a way around court mandated environmental impact statements required as a result of a U.S. district court’s ruling.

There is a fierce urgency in the fight over the Monsanto Protection Act for family farmers and food activists across the country as 13 new genetically engineered crops await approval at the U.S. Department of Agriculture and AquaBounty's GMO salmon could be approved by the Food and Drug Administration next month. The passage of this rider in an unrelated budget spending bill could open the floodgates for these new approvals, even if the budget agreement only lasts for the next six months.

Any new approvals could threaten the livelihoods of America’s farmers, as the approval of even a single one of these untested crops can lead to widespread contamination of farmers’ crops, bringing economic harm to farmers and contamination to our seed supply.

For the past year, family farm advocates and legal experts have fought to stop the Monsanto Protection Act, another special interest corporate giveaway that fundamentally undermines the federal courts’ ability to protect family farmers and the environment from potentially hazardous GMO crops that have not been proven safe.

We recognize that there are narrow-minded people out there who do not think that a six-month provision that subverts our Constitution and judicial authority for another corporate handout to Monsanto is worth shutting down the federal government, but here at Food Democracy Now! we disagree.

We are greatly encouraged by the quarter million American people who have signed this letter and the tens of thousands of phone calls to Congress and the White House to demand that our basic rights are upheld by our elected officials, particularly our President. This is a sign of how urgent citizen participation is to maintaining a democracy.

Click here to make a call to the White House and let President Obama and your members of Congress know how upset you are and that it's time for GMO labeling.