President Obama: 'It's Time for America and the World to Act on Climate Change' 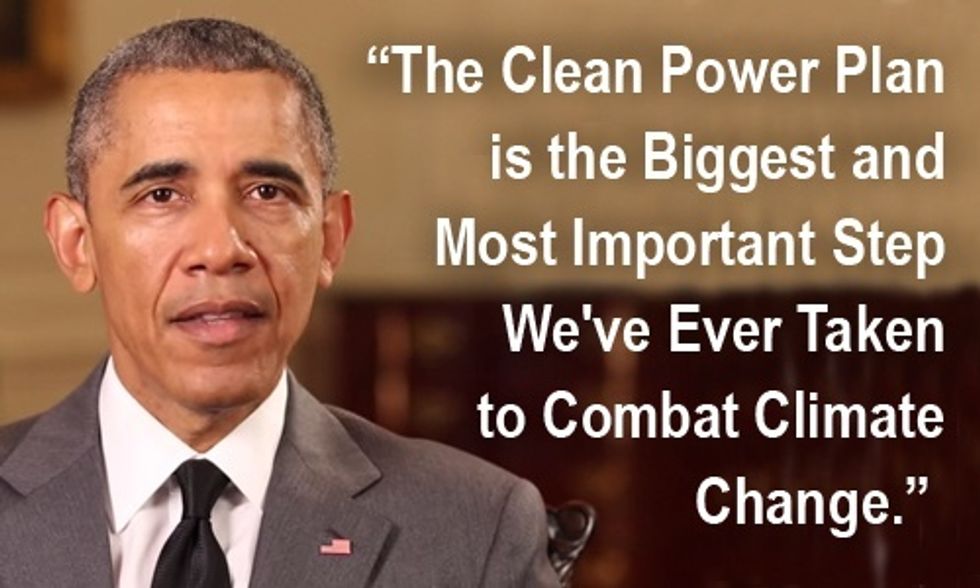 President Barack Obama declared Sunday that his administration is poised to unroll greater-than-expected cuts to greenhouse gas emissions from U.S. power plants, in what he called "the biggest, most important steps we've ever taken to combat climate change."

However, as leaked details of the plan circulate ahead of Monday's slated unveiling, some climate campaigners say the measures, in fact, fall short of the president's pledge to take aggressive action to curb the global warming crisis.

In a White House video released Sunday, Obama acknowledged this crisis—emphasizing that scientific data shows that climate change is real and it already poses a threat to human and environmental health. "Climate change is not a problem for another generation," Obama said. "Not anymore. That's why on Monday my administration will release a final version of America's Clean Power Plan."

The plan is an update to a draft version released by the Environmental Protection Agency last summer. While the contents have not been officially released, they have been reported by numerous media outlets, including the Washington Post and New York Times, who cited unnamed sources in the Obama administration in articles published Saturday.

The cornerstone of the plan is a 32 percent cut in power plants' greenhouse gas emissions by 2030, compared to 2005 levels. This is a greater reduction than the 30 percent slash called for in last year's draft.

The new rule also boosts the requirements for renewable energy sources. "While the proposed rule would have allowed states to lower emissions by transitioning from plants fired by coal to plants fired by natural gas, which produces about half the carbon pollution of coal, the final rule is intended to push electric utilities to invest more quickly in renewable sources, raising to 28 percent from 22 percent the share of generating capacity that would come from such sources," note Times reporters Coral Davenport and Gardiner Harris.

However, the plan also includes apparent concessions to the industry—which has already vowed to levy lawsuits against the provisions.

Post reporter Joby Warrick wrote that "state governments also will be given more time to meet their targets and considerably more flexibility in how they achieve their pollution-cutting goals, according to two senior officials knowledgeable about the rule. For the first time, the officials said, the plan also includes a 'reliability safety valve' that can buy states additional time if needed to avoid disruptions in the power supply."

Moreover, the Times notes that "the final rules are explicitly meant to encourage the use of interstate cap-and-trade systems, in which states place a cap on carbon pollution and then create a market for buying permits or credits to pollute. The idea is that forcing companies to pay to pollute will drive them to cleaner sources of energy."

But Daphne Wysham, director the Sustainable Energy and Economy Network, told Common Dreams that such cap-and-trade measures "allow polluters to profit and do not create an incentive for rapid reduction in greenhouse gas emissions."

"The good news is that Obama is recognizing that the climate crisis is urgent and this is going to be an important part of his legacy," continued Wysham, who participated in the recent direct actions and protests against Shell's Arctic drilling fleet in Portland, Oregon. "The bad news is that he is going nowhere near far enough."

"We need to be off of coal completely, as soon as possible," Wysham continued, echoing the warnings of scientists, who say that, to avert a climate catastrophe, the vast majority of fossil fuel deposits around the world must remain unused. "We need to be looking at 1990 greenhouse gas emissions baselines like the rest of the world uses. We need to be rapidly phasing out of coal and gas fired power. We need to stop drilling in the Arctic, which Obama allowed Shell to proceed with."

Karthik Ganapathy, U.S. communications manager for the climate action group 350.org, agrees. "This plan is a good first step but not enough for Obama to hang his climate legacy on," Ganapathy told Common Dreams. "It doesn't go far enough in terms of moving society off of fossil fuels."

"When it comes to the things Obama can do to combat climate change with his executive authority, there is a long list," Ganapathy continued. "He could drastically change the leasing process for fossil fuel on public land, reject the Keystone XL pipeline and stop drilling in the Arctic. This is all within his purview."

Bill Snape, senior counsel to the Center for Biological Diversity, told Common Dreams that whatever gains are represented in the president's proposal, the details of which are still trickling out, are ultimately a testament to people power: "We wouldn't be where we are without the people, the millions of people, who have sacrificed time and energy and resources and money hold meetings and stage protests. But this is just the beginning."