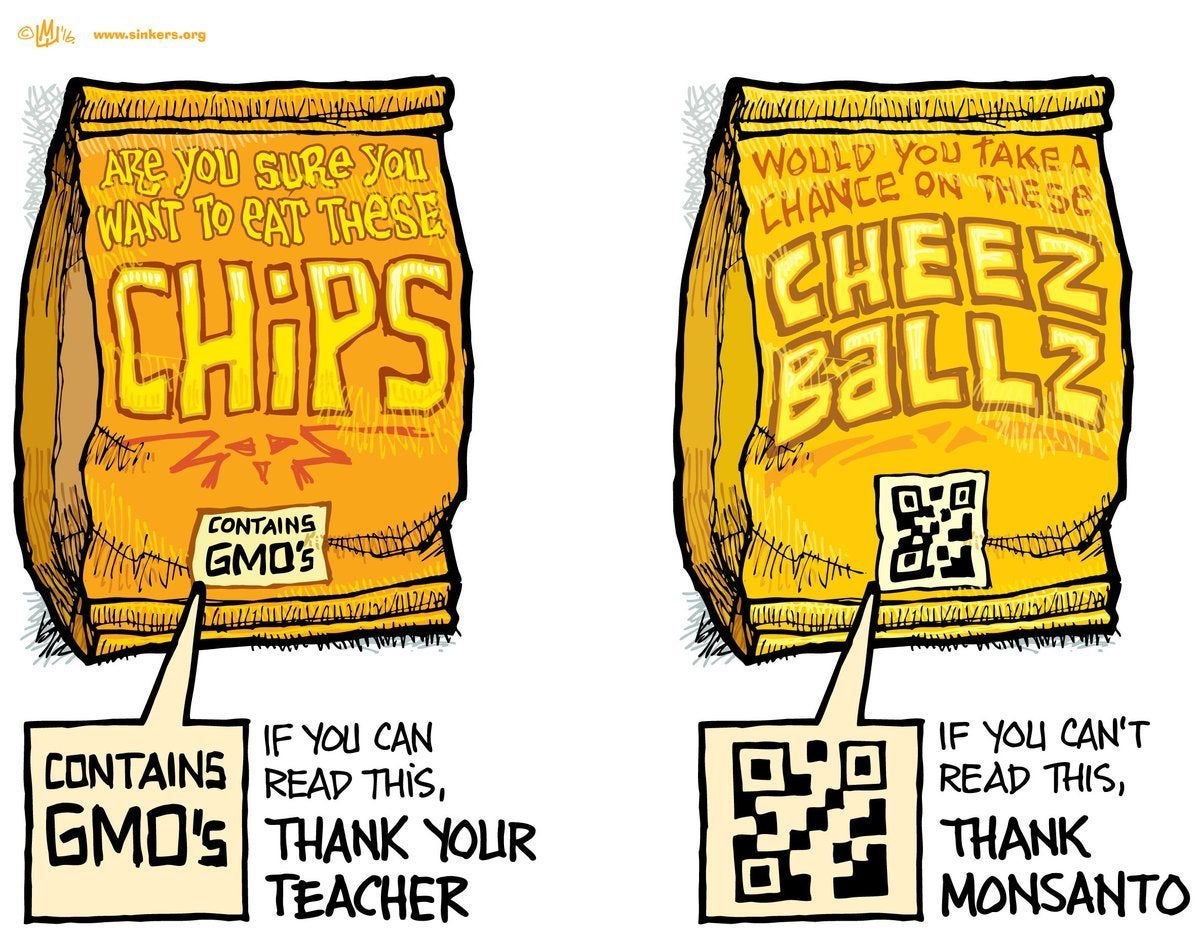 UPDATE: On Friday, July 29, President Obama signed into law S. 764, which overturns Vermont’s GMO label law and directs the Sec. of Agriculture to come up with a national labeling standard at some point in the next two to three years.

UPDATE: The U.S. House of Representatives passed the bill by a 306-117 vote Thursday. The bill now heads to President Obama’s desk.

Looks like we’re finally getting GMO labels on food products—just not the kind you can actually read.

President Obama is expected to throw his weight behind a
controversial bill that allows businesses to use a smartphone scannable QR code instead of clear, concise wording that informs consumers if a product contains genetically modified ingredients. The bill would also nullify state-by-state GMO labeling mandates such as Vermont’s landmark law that took effect on July 1.

“While there is broad consensus that foods from genetically engineered crops are safe, we appreciate the bipartisan effort to address consumers’ interest in knowing more about their food, including whether it includes ingredients from genetically engineered crops,” White House spokeswoman Katie Hill told
Bloomberg in an e-mail. “We look forward to tracking its progress in the House and anticipate the president would sign it in its current form.”

The House of Representatives is voting today on legislation from the Senate, which voted 63 to 30 in favor of the bill on July 7, less than a week after Vermont enacted its GMO label law. The bipartisan “compromise” bill was conceived after years of negotiations by Democrat Sen. Debbie Stabenow and Republican Sen. Pat Roberts and is supported by the very industry that produces and profits from such products, including the powerful Grocery Manufactures Association and world’s largest seed producer and pesticide giant Monsanto.

Yesterday, the House voted 242-185 on a rules resolution to bar amendments to the bill, meaning it would not have to go back to the Senate. After the House vote today, Congress will be on summer recess until Sept. 8.

Some House Democrats have criticized the bill.

Many consumer and environmental groups have nicknamed the looming mandate as the “Deny Americans the Right to Know,” or
DARK Act, as the bill goes against the majority of Americans who support clear labeling for GMOs.

While the influential Organic Trade Association (OTA) unexpectedly
endorsed the Stabenow-Roberts bill, the group’s backing has been viewed as highly suspicious. Just yesterday, the farmer-controlled Organic Seed Growers and Trade Association announced that it withdrew membership from the OTA, citing “betrayal” over the “Monsanto-backed” bill.

The group also accused the OTA’s board members of endorsing a “dangerous” Senate bill as, “recent revelations have made clear that the OTA has created numerous close partnerships with Monsanto including intensive lobbying efforts by the notorious biotech-linked lobbyist Podesta Group on behalf of the deal brokered by Senators Stabenow (D-MI) and Roberts (R-KS).”

https://twitter.com/theOSGATA/statuses/753275360477937665 regulatory officials will follow the spirit of the law when crafting rules and require labeling of all GMO ingredients that gain USDA approval as well as those developed with novel technologies.”

Still, the bill even has conservative critics. Right wing think tank Heritage Foundation came up with
six problems with the labeling bill, with one reason being the “implication is that there’s something wrong with [genetically modified] crops.”

Despite its flaws, it appears that the bill will soon land on President Obama’s desk, as the Republican-controlled House is likely in favor of passage. Last year, the House voted 275-150 to pass an anti-labeling bill.

Bloomberg reported that Republican Mike Conaway of Texas, the chairman of the
House Agriculture Committee, has indicated his support of the bill meaning that it will likely pass the lower chamber.

Conaway and House Ag Committee ranking member Collin Peterson told Agri-Pulse that they expect a majority of both Republicans and Democrats to vote for the legislation on final passage. Agri-Pulse noted, however, that the final GMO bill is bunched with “a far more controversial abortion-related measure that Democrats broadly oppose,” so stayed tuned for how the final vote tallies.

Meanwhile, a number of major food companies such as General Mills, Campbell Soup, Kellogg, Conagra Foods and Mars have voluntarily added GMO labels on their packages. This marks a larger trend of businesses complying with consumer demand of transparency and organic food.

Sales from organic farms across the country have boomed in recent years, with consumer spending up 72 percent since 2008. Just yesterday, the meat brand Applegate announced its commitment of removing GMOs from its entire supply chain, from animal feed to finished product and gain third-party certification.

Today, yogurt maker Dannon announced that its products in the U.S. that have GMO ingredients will be clearly labeled and has unveiled its first Dannon and Oikos branded products containing more natural and non-GMO ingredients.

“Shoppers are our main ingredient, and what is important to them drives what we do. For this reason, the range of products we make is evolving to provide even more choices,” said Dannon CEO Mariano Lozano. “Transparency is the key word for this shift. To show to our consumers that in order to make a real choice, we need clear labels, today we are making a bold change and candidly discussing how transparency from brands is essential for shoppers to make real choices.”

From start to finish, our plan to remove GMOs from our entire supply chain: https://t.co/1edQAO0Fqn pic.twitter.com/xneo1KnsEK

Environmental Working Group’s President Ken Cook agrees. “While we support a national, mandatory GMO labeling system, we cannot support this proposal because food companies would be permitted to make a GMO disclosure through a means that is unavailable or unfamiliar to many Americans,” he said.

“While the proposal clearly intends to require a disclosure on more foods than are covered by state GMO labeling laws, we are concerned that loopholes could undermine Congress’ intent.”