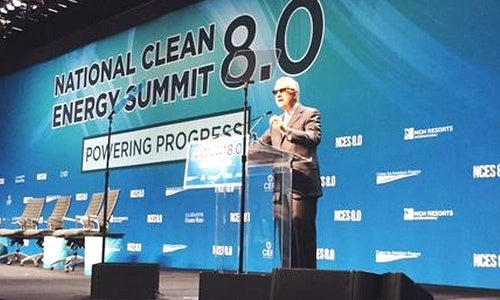 President Obama doubled down on climate and clean energy Monday saying, “No challenge poses a greater threat to our future than climate change.” Speaking at the eighth Clean Energy Summit, in his first public appearance since vacation, President Obama launched an 11 day climate barnstorming campaign.

His blunt speech directly challenged climate sceptics as ignoring the new logic of the market, saying that now clean energy was cheaper, fossil interests still refused to embrace change. Obama asserted, “We believe we can do good while doing well at the same time.” He laid out a series of policy initiatives—the most important a long overdue message to federal banking regulators to get out of the way on programs that help homeowners bring down their energy bills by making their buildings less leaky.

The 11 days—yesterday in Las Vegas, next Thursday in New Orleans, the following week to the Arctic—were a prelude, the President promised, to a 100 day long marathon leading up to the Paris Climate COP. The overall campaign will continue through the National League of Cities Convention in Nashville in November, culminating at the UN Summit. In Obama’s mind, it is a campaign “between those who fear the future and those who are eager to see the future.”

The opening salvo was buttressed by the two key dynamics that the President expects to drive an ambitious if incomplete climate deal over the Paris finish line: city leadership and clean energy economic clout.

While the formal negotiations between UN member states drag and lag at a lowest common denominator pace, the real front line warriors, cities, are crowding into an international diplomatic space long closed to them. As former New York Mayor Michael Bloomberg signaled in his Foreign Affairs manifesto this month, the world’s first Metropolitan Generation has been handled the climate challenge, and it is going to meet with an urban strategy: diverse, bottom up and profitable.

Yesterday, the White House challenged America’s cities to turbocharge the Compact of Mayors. “The Compact is an initiative supported by Mike Bloomberg, the UN and global city networks—C40, ICLEI, UCLG—coming together to create a measurable accountable reporting platform through which cities say to their nation-states, in effect, “You Mr. Prime Minister may be forced to hesitate and equivocate, but we will lead. And you can measure our results—so the world will know what can be done.”