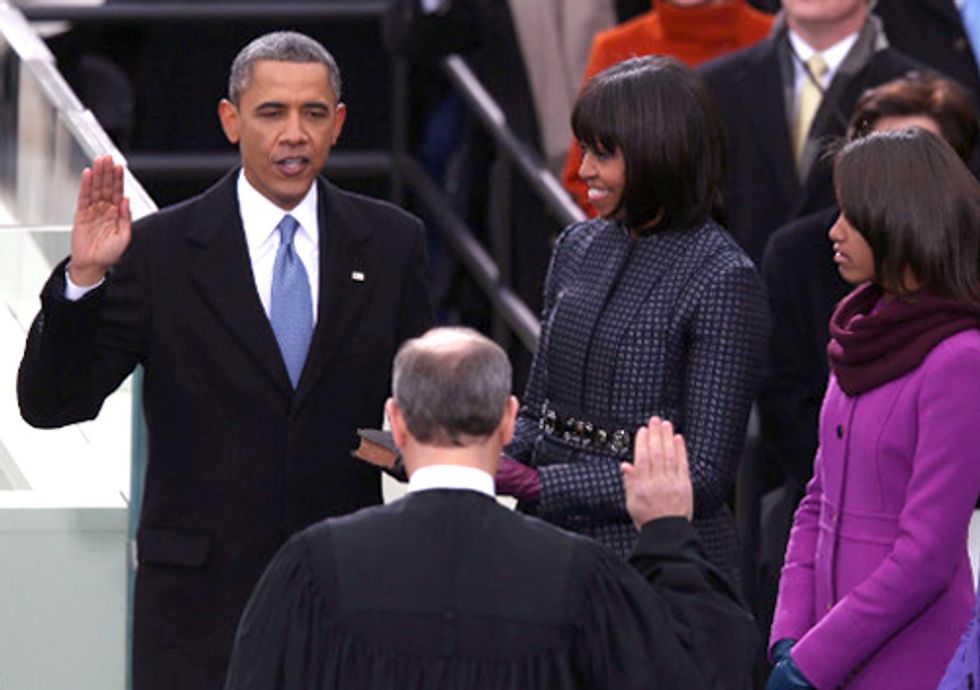 Minutes ago, President Obama concluded his second inaugural address. In his address he acknowledged climate change and the need for the U.S. to lead in the transition to a sustainable energy future.

We, the people, still believe that our obligations as Americans are not just to ourselves, but to all posterity. We will respond to the threat of climate change, knowing that the failure to do so would betray our children and future generations. Some may still deny the overwhelming judgment of science, but none can avoid the devastating impact of raging fires, and crippling drought, and more powerful storms. The path towards sustainable energy sources will be long and sometimes difficult. But America cannot resist this transition; we must lead it. We cannot cede to other nations the technology that will power new jobs and new industries—we must claim its promise. That is how we will maintain our economic vitality and our national treasure—our forests and waterways; our croplands and snowcapped peaks. That is how we will preserve our planet, commanded to our care by God. That’s what will lend meaning to the creed our fathers once declared.

“This is a call to action against the climate chaos that is sweeping our nation and threatening our future. Now it's time to act. Power plants are our single largest source of carbon pollution. We must cut that pollution. We must do it now, for the sake of our country, our children and the future we share,” said Frances Beinecke, president of the Natural Resources Defense Council (NRDC).

"Last year was the hottest on record for the continental United States, the National Oceanic and Atmospheric Administration reported earlier this month. The NRDC has proposed a common-sense plan to reduce power plant carbon pollution by 26 percent by 2020. The proposal would keep roughly half a billion tons of carbon out of the atmosphere every year, cutting the U.S. carbon footprint by about 10 percent." said Beinecke.

“From Hurricane Sandy, to the worst drought since the Dust Bowl, to raging forest fires, far too many Americans and the places we love have been devastated by recent extreme weather events fueled by global warming," said Margie Alt, executive director of Environment America.

“Over the next four years, we are counting on President Obama to set tough limits on carbon pollution from power plants, continue investing in the development of clean, renewable energy sources, including wind and solar power, and to implement dramatic energy efficiency improvements that will cut dangerous pollution and protect our environment and our families," continued Alt.