President Obama: Climate Change Is an 'Immediate Risk to Our National Security' 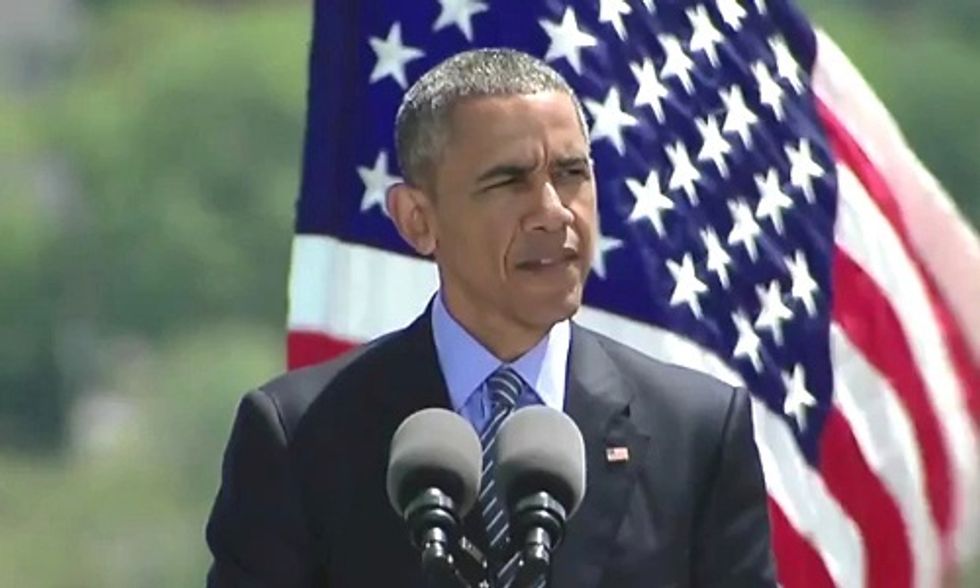 When President Obama delivered the keynote address at the Coast Guard Academy graduation ceremonies Wednesday, the theme was one he's been hitting with increasing frequency as he nears the end of his time in office: climate change. He has emphasized its impact on the economy, public health and national security. He focused on the latter at the Coast Guard ceremony, with an increased sense of urgency.

As Republicans in Congress fight against Obama's climate measures such as the Clean Power Plan while also raising the alarm about terrorism and trying to position themselves as the party best equipped to fight it, the President appears to be painting them into a corner.

"This cannot be subject to the usual politics and the usual rhetoric," said Obama to the Coast Guard graduates, even as Republicans are applying ideological rhetoric to virtually every environmental issue.

The President stressed the importance of the missions that the graduates will participate in, saying, "We need you to safeguard our ports against all threats, including terrorism. We need you to respond in times of disaster or distress and lead your rescue teams as they jump out of perfectly good helicopters. We need you in the Middle East; in the Gulf; alongside our Navy; in places like West Africa, where you helped keep the ports open so that the world could fight a deadly disease. We need you in the Asia Pacific, to help our partners train their own coast guards to uphold maritime security and freedom of navigation in waters vital to our global economy."

Then he said, "This brings me to the challenge I want to focus on today—one where our Coast Guardsmen are already on the front lines, and that, perhaps more than any other, will shape your entire—and that's the urgent need to combat and adapt to climate change. As a nation, we face many challenges, including the grave threat of terrorism. And as Americans, we will always do everything in our power to protect our country. Yet even as we meet threats like terrorism, we cannot, and we must not, ignore a peril that can affect generations."

"Cadets, the threat of a changing climate cuts to the very core of your service," he continued. "You know the beauty of the sea, but you also know its unforgiving power. Here at the Academy, climate change—understanding the science and the consequences—is part of the curriculum, and rightly so, because it will affect everything that you do in your careers. Some of you have already served in Alaska and aboard icebreakers, and you know the effects. As America's Maritime Guardian, you've pledged to remain always ready—Semper Paratus—ready for all threats. And climate change is one of those most severe threats."

He then moved into the meat of his presentation.

"I'm here today to say that climate change constitutes a serious threat to global security, an immediate risk to our national security," he said. "And make no mistake, it will impact how our military defends our country."

Climate change, he said, "will shape how every one of our services plan, operate, train, equip and protect their infrastructure, their capabilities, today and for the long term." And given that so many military facilities are coastal, that could threaten their readiness for action, he said.

He pointed out some of the risks that today's and tomorrow's Coast Guard might have to cope with. They included rising seas forcing people from their homes and creating more refugees.

"I guarantee you the Coast Guard will have to respond," he said, just as they are part of the international relief teams responding to humanitarian disasters such as Typhoon Haiyan in the Philippines.

He pointed to food shortages due to drought and increases competition for resources as another threat and mentioned two instances of instability and violence they'd led to: "Severe drought helped to create the instability in Nigeria that was exploited by the terrorist group Boko Haram. It's now believed that drought and crop failures and high food prices helped fuel the early unrest in Syria, which descended into civil war in the heart of the Middle East."

He said that responding to the impacts of climate change would ultimately not be enough: "As men and women in uniform, you know that it can be just as important, if not more important, to prevent threats before they can cause catastrophic harm. And only way—the only way—the world is going to prevent the worst effects of climate change is to slow down the warming of the planet. The world has to finally start reducing its carbon emissions—now."

The President enumerated again the steps he's already proposed to do so, including making building more energy efficient, investing more in research on renewable technologies, cutting carbon emissions from power plants and working with other countries to strike international greenhouse gas reduction agreements.

He hit one jarring note, given his recent approval of Shell's plan to drill for oil in the fragile Arctic seas ecosystem, a move widely condemned by environmental groups.

"Climate change means Arctic sea ice is vanishing faster than ever," he said. "We're witnessing the birth of a new ocean—new sea lanes, more shipping, more exploration, more competition for the vast natural resources below. The U.S. is an Arctic nation, and we have a great interest in making sure that the region is peaceful, that its indigenous people and environment are protected, and that its resources are managed responsibly in partnership with other nations. I believe that our interests in the Arctic demand that we continue to invest in an enduring Coast Guard icebreaking capacity."

Obama took another sly stab at the climate deniers in Congress.