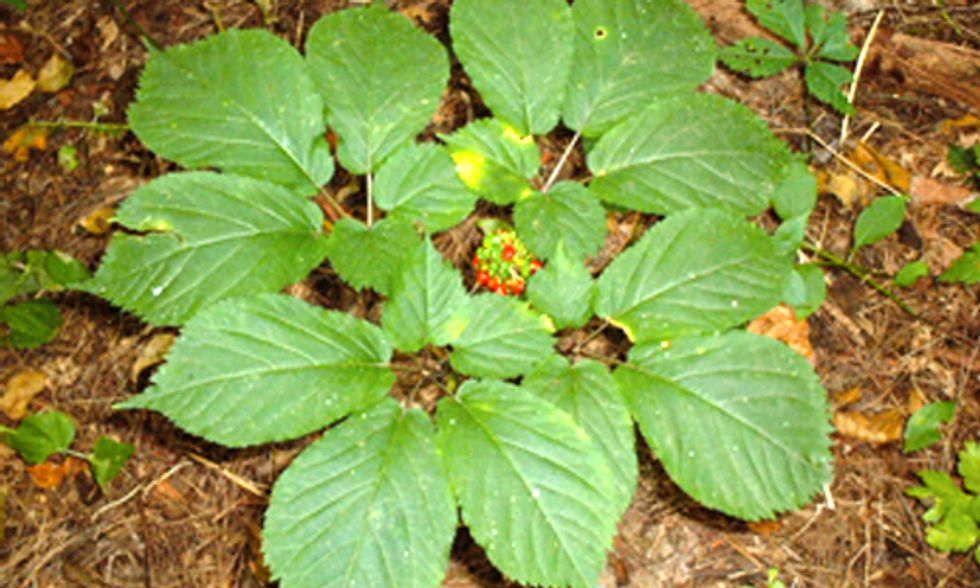 [Editor's note: This article has been going viral on EcoWatch for days and has been very popular over the last many months. The article is from the 2009 August issue of EcoWatch Journal and the online format of the article is from an older version of our site. I thought with it's renewed popularity, it was best to provide it in our updated online format. Enjoy.]

American Ginseng, Panax Quinquefolius, is a long-lived understory herb found in the mesophytic forests of Appalachia. Ginseng was once native to China but over-harvesting of its species, Panax Ginseng, extirpated the populations. The Chinese have used the roots of the plants in medicinal preparations for thousands of years. Soon after the species was discovered in North America in the 1700s, the Chinese relied heavily on exports of American Ginseng. In the late 1700s, residents established a significant trade chain with the Orient and exported tremendous amounts of ginseng roots. More than 750,000 pounds of wild ginseng roots were exported in 1822 and ginseng sold for 42 cents a pound. It still remains an important component of the informal economy in Appalachia and prices of ginseng today range from $200 to a high of $1,500 a dried pound for the wild roots.

American Ginseng is still in need of protection in order to prevent over-harvesting and continue the economic value it has for the Appalachian region.

In the early 1900s, the ginseng community recognized the need to protect wild populations and enlisted two practices: laws and cultivation. Ginseng can be cultivated under shade cloth or wooded canopies. Northeastern Ohio had several ginseng farms in the early 1900s. The plant was so popular that a national and several state ginseng organizations were created to assist growers. Ohio passed House Bill 9 in 1915 that levied a penalty for the destruction or theft of ginseng. Today, wild ginseng is listed under Appendix II of the Convention of International Trade of Endangered Species and ginseng trade is monitored by the U.S. Fish and Wildlife Service.

Legislation and cultivation have not been totally effective in protecting wild populations. Poaching has become very problematic for both ginseng growers and public land managers trying to secure wild ginseng. Harvesters are urged to abide by sustainable harvesting practices such as taking only mature plants (5 years or older), replanting the ripe berries in the forest, and abiding by harvest seasons. In an effort to protect cultivated ginseng, growers in Ohio have recently begun to seek state certification for Ohio growers. Currently two states have certification—Wisconsin and West Virginia. Certification means that cultivated plants could be distinguished from wild plants and would become exempt from regulations. It may also provide legal means for growers to access crop insurance for roots that are destroyed or stolen.

Ultimately, the long-term survival of this economically important and culturally significant Appalachian species and the future of ginseng trade is dependent on teaching harvesters sustainable practices and encouraging continued cultivation of the roots. Certification of growers is an important step.