Precious Water Bottled and Shipped Out of Drought-Ridden California 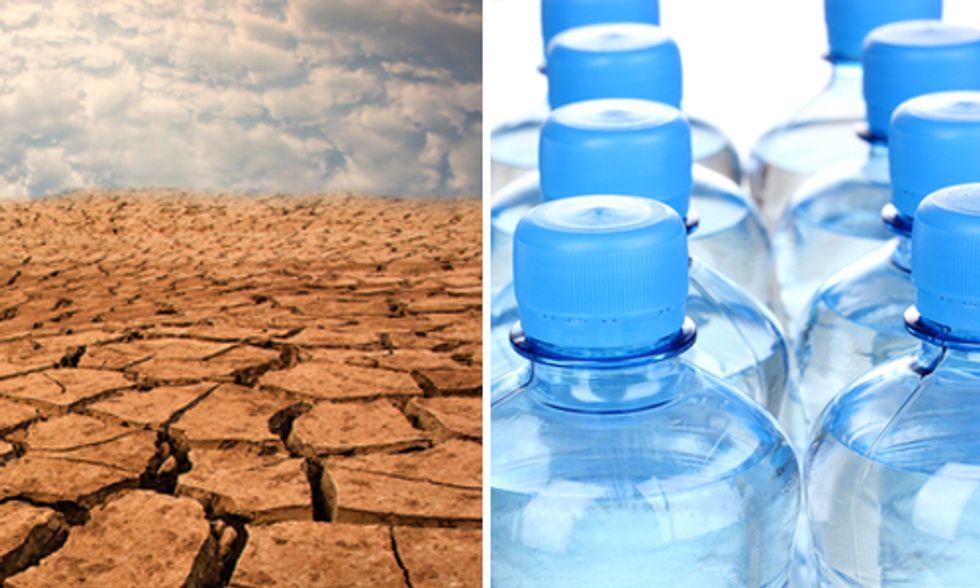 California is suffering through a record drought. Water is being rationed and its usually fertile agriculture industry is suffering.

Perhaps the biggest reason that bottling companies are using water in drought zones is simply because we're still providing a demand for it.
Photo credit: Shutterstock

Meanwhile, someone in Minnesota or Kentucky or Maryland may be drinking a bit of California's precious commodity. Mother Jones reported this week that at least four major bottled water companies—Aquafina, Dasani, Crystal Geyser and Arrowhead—use water from California, either ground (spring) water or tap water. Aquafina and Dasani both bottle and sell treated tap water, while Crystal Geyser and Arrowhead use spring water.

That's partly because the brands are based or have plants there. In addition, California is the only western state that doesn't regulate or manage groundwater use.

Mother Jones senior editorial fellow Julia Lurie reported that while the amount of water used to make bottled water pales in comparison to the 80 percent of California water used in agriculture, the idea that water is being directed away from the drought-stricken state is head-scratching. Even a spokesperson for Arrowhead told her that from an environmental standpoint, "tap water is always the winner."

Lurie says it comes down to how well the American public has been sold on the concept of bottled water—even when it's just a filtered version of what comes out of their faucet.

"Despite the fact that almost all U.S. tap water is better regulated and monitored than bottled, and despite the hefty environmental footprint of the bottled water industry, perhaps the biggest reason that bottling companies are using water in drought zones is simply because we're still providing a demand for it: In 2012 in the U.S. alone, the industry produced about 10 billion gallons of bottled water, with sales revenues at $12 billion," she wrote.