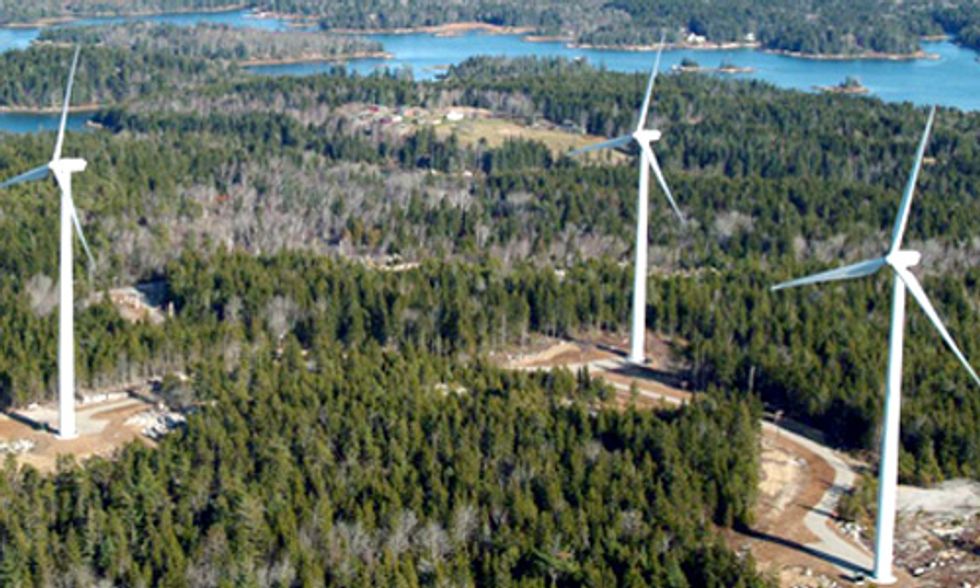 Navi Whitten, a College of the Atlantic undergraduate from Cape Elizabeth, Maine, was raised in a small coastal town exploring tide pools and adventuring in the sea. “At College of the Atlantic, I am driven to find energy solutions for the rural communities on the Maine Islands," he said. "I currently help manage North Haven Oyster Company where three of us sustainably grow hundreds of thousands of oysters on a small island. Maine is my home, and I want to increase the quality of life here as much as I can.”

After spending three informative, inspiring weeks at the Energy Academy on Samso island, Denmark, students of College of the Atlantic and participants and staff of the Island Institute returned to the U.S. to tackle energy challenges for the people of Maine—specifically, islanders.

Vinalhaven and North Haven—two islands in midcoast Maine that make up the Fox Islands—have small year-round communities that rely on the lobster industry as the primary source of economic stability with tourism following behind.

Vinalhaven and North Haven—two islands in midcoast Maine that make up the Fox Islands—have small year-round communities that rely on the lobster industry as the primary source of economic stability with tourism following behind. But lobstering is in danger of succumbing to high energy prices, among other challenges. Photo credit: Navi Whitten

The two islands are separated by the small Fox Island thoroughfare, which hosts much of North Haven’s lobstering fleet and moored sailboats in the summer. Vinalhaven is a larger island, with a larger lobstering fleet. There are two separate ferries that depart Rockland to carry passengers, automobiles, and goods to and from the islands; the passage is 12 miles each way.

The two islands’ residents consume about 10,000 kWh annually so, to the untrained eye, it looks like the turbines supply enough electricity, with a 1,000 kWh surplus.

The turbines generate most of the electricity when the wind is blowing steadily at fair speeds, which is the case for most of the year, September through June. However, in July and August, electricity consumption grows with the population. This wouldn’t be a problem, if, in those two months, the wind kept blowing like it does the rest of the year. But it doesn’t: The energy generated by the turbines in July and August doesn’t even come close to the residents’ consumption.

So how do the islands get the energy they need? In those two summer months, FIEC has to purchase a 500 kWh peak capacity for a fixed price. If, for some reason, the electric load goes beyond capacity, the utility has to then purchase electricity on the spot market, which is very expensive.

In the winter, when the winds blow steady and the consumption is lower, FIEC sells its excess energy via an underground cable to the mainland. The ability to sell in the winter helps defray islanders’ total year-round electricity cost, but the price is still high. With an average hovering around 27 cents per kWh, Fox Islands residents pay around twice as much as the national average, and they aren’t even the highest electricity costs compared to other Maine islands.

Maine’s winters are long and cold. Islander or not, seven of 10 Maine households are heated by fuel oil—a higher ratio than any other state. In response, the local legislature set a goal of cutting this consumption by one-third by 2030.

The price of oil cannot be determined by the island residents, and they pay more than the mainland communities due to extra distribution costs. So, in order to look at ways to make the Fox Islands more energy independent, we need to look at what can be generated on the islands.

Fortunately there are many ways to increase energy generation with renewable sources. There’s also existing home-heating technology that uses electricity in a way that is far more efficient than fuel oil—heat pumps.

In the beginning, this whole project was focused on generating a feasibility study for a large solar array that could offset summer electricity needs. But several financial, technological and social challenges have emerged as we look deeper into the project. With residential heating, we first looked at the potential for bulk purchasing of heat pumps to offset oil consumption, while also paying attention to the need for weatherization. We believe solar panels and heat pumps together provide opportunities for the Fox Islands to become more energy independent while also lowering costs. But obstacles remain—mostly financial.

After five years of successful wind energy generation, island residents have not seen a steady decrease in energy costs, in part due to expensive legal fees as well as the high summer energy consumption. And we have begun to see the challenges FIEC faces in dealing with buying and selling energy on a fluctuating market. Being able to sell excess electricity in the winter certainly helps keep costs reasonable, but there isn’t much room to make it more affordable unless the market price in the winter becomes higher when selling.

Another difficulty is that a large solar array can certainly generate enough energy to make up for reduced wind generation—but mostly from 11 a.m. to 2 p.m., whereas peak usage usually is 4 to 10 p.m. Battery storage is possible, but very expensive and not a common technology yet for this scale.

Heat pumps are great because they can run at 400 percent efficiency and need no fuel oil to operate—only electricity. How a heat pump works is remarkably similar to your refrigerator. But they do use a fair amount of electricity, mostly during that long winter. So, the more electricity used to run the heat pumps, the less energy there is to export to the mainland, and thus less revenue from the off island market.

Many other questions have come up in this research. Does it make more sense to use fuel oil to heat homes, leaving more electricity to sell on the market and to help lower electricity costs? Or, can it be more cost-effective to run the heat pumps off wind and solar, and not have as much of an excess to sell in the winter? The answers depend on the fluctuating price of oil and electricity, making it difficult to calculate payback periods and returns on investment.

As we find ways that these systems can work for the islands, another question arises. What will the financial model look like? We are looking at the tax appetite of a LLC which includes ITCs (Investment Tax Credits), PPAs (Power Purchase Agreements), as well as RECs (Renewable Energy Credits) and how they all inform each other. FIEC is a nonprofit, but one that could greatly benefit from tax incentives and rebates via a taxable LLC.

We are hopeful our study will help FIEC see potential ways to continue moving toward lower electricity costs and more energy independence from the mainland. We will be presenting findings, along with several other groups Nov. 7, at the Island Energy Conference, sponsored by The Island Institute in Portland.

I am working with fellow College of the Atlantic undergraduate Zak Kendall and FIEC board member Patrick Trainor, who lives year round on Vinalhaven. If the final feasibility study generates enough interest from FIEC and island communities, there is potential for plans to be implemented in the future.

I grew up in southern Maine but lived on North Haven all summer in 2014, working as a stern man on a lobster boat. My captain expressed concerns for the future of lobstering, particularly for the high energy costs that affect him and his family. He also runs an oyster farm, where I helped to plant, harvest and sell thousands of oysters. He said it would be difficult to run the upweller pump for young oysters if the price of electricity went much higher.

But the cost of both fuel oil and electricity will most likely continue to rise, so we are working hard to stabilize these prices and to make essential new resources available in a clean, affordable and resilient way.