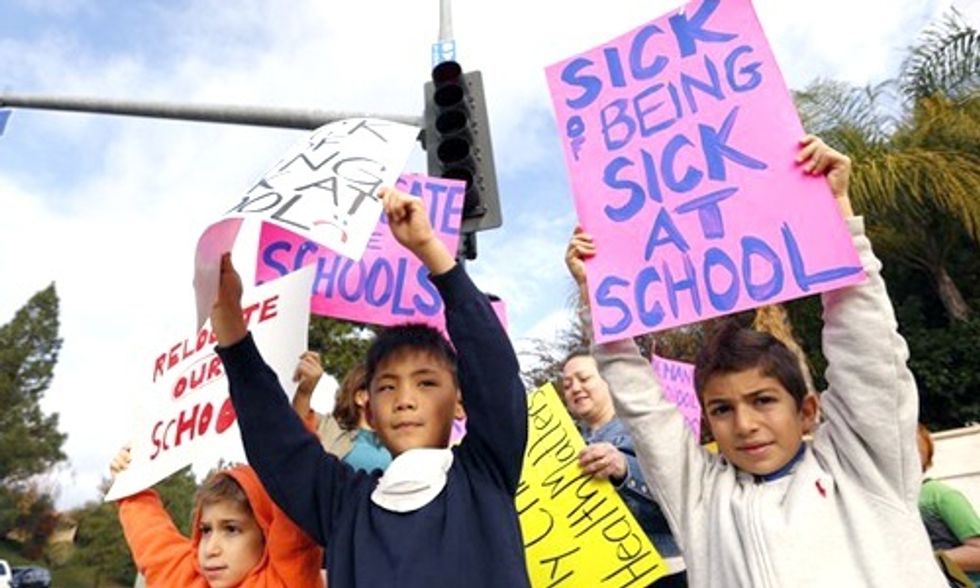 As the natural gas storage facility in the Porter Ranch neighborhood of Los Angeles continues to spew gas for nearly three months, the human face of this environmental disaster becomes even more pressing. As of Tuesday, close to 2,000 residents have been evacuated, two schools closed and the health department has linked hundreds of health complaints from nausea and vomiting to headaches and respiratory problems to two chemicals in the gas.

The health threat from this leak comes primarily from exposures to the chemicals known as odorants, tert-butyl mercaptan and tetrahydrothiophene, added to the natural gas to serve as a warning for leaks. The methane, which is the primary ingredient in the gas, is a powerful contributor to global warming and global ozone smog levels but is not toxic to the local community. The gas also contains low levels of other chemicals that can be harmful and the health department has recommended continued monitoring of the air in the Porter Ranch community to keep an eye on the levels of these contaminants.

So far, air testing in the neighborhood has not shown levels of pollutants tied to long-term health damage. But close scrutiny is needed as this drags on and it's no longer a short-term incident. The following are important questions to answer if this leak extends for the additional two to three months currently projected.

What is the true pattern of low-level Volatile Organic Compounds (VOCs), particularly benzene, being detected in the community samples?

Current monitoring data show mostly very low levels of benzene with some scattered spikes that don't exceed levels of concern for short-term events. However, the existing monitoring is not really set up to evaluate medium- to longer-term exposures. Continuous monitoring, rather than grab samples, that can reliably measure low levels, will be needed to paint an accurate picture of what's going on and make sure we aren't left with data gaps that limit our ability to assess health risks. This type of monitoring is also needed to better determine what levels may be due to the leak and what is coming from other sources.

Which areas are most impacted by the gas? Better data is also needed on the levels of the sulfur compounds—odorants and their breakdown products (e.g. hydrogen sulfide)—in the gas flowing out of this facility and in the ambient environment.

Current monitoring is not using sensitive enough testing techniques and this makes it difficult to understand what types of exposures are occurring. Some of the current testing is only able to detect levels of the tert-butyl mercaptan 50 times higher than the level where you expect to have health impacts from odors. We need more information that is able to narrow this gap and get us closer to understanding where the hotspots are.

What type of medical monitoring is needed to assess the health impacts during this event and after residents are able to return to their homes?

There is currently very little data on health effects of the odorant chemicals beyond the physiological response to the odor. These compounds are utilized because they provide an effective warning about even small amounts of leaked gas. People are not expected to be subjected to them for very long and we need to understand better what the impact might be when exposures occur for a longer period of time.

How can warnings be improved to better capture the most vulnerable?

There is a great deal of scientific evidence showing that children, people with respiratory and cardiovascular diseases, and pregnant women are especially susceptible to many different types of air pollution. We need to make sure that all health-related advisories properly address these vulnerabilities and make sure these populations have the resources needed to protect themselves.

Unfortunately, the community of Porter Ranch is not alone in facing the impacts of oil and gas. On a daily basis, communities across California live with oil and gas infrastructure—from the well site to facilities which store, transmit, and distribute these resources to our homes and vehicles. The types of air pollutants and health threats can vary depending on the stage in the process and communities face different risks. This incident raises bigger questions about—and highlights huge gaps in—policies to evaluate and prevent community impacts from oil and gas in California.

It shouldn't take a disaster to make us take a hard look at the safety of our oil and gas infrastructure. As the Porter Ranch community struggles to deal with the effects of this leak, we need to make sure they have the resources they need and California, as a whole, starts paying a lot more attention to the people whose lives are impacted daily by oil and gas facilities.