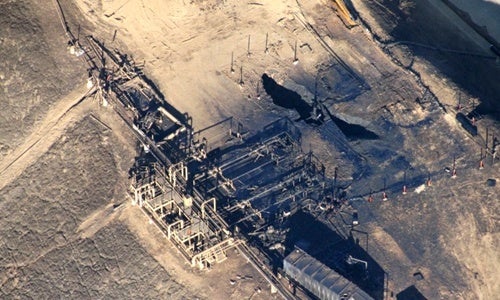 The Aliso Canyon natural gas well blowout, which lasted for months and sickened scores of nearby residents, has been confirmed as the largest methane leak in history.

Beyond that, he told Inside Climate News, “It’s the biggest leak in U.S. history.”

As the Los Angeles Times reports, “Conley piloted a single-engine plane rigged with methane and ethane sensors through the plume and analyzed it during 13 different research flights between Nov. 7 and Feb. 13, with the last readings taken just two days after the well was temporarily halted.”

With each flight, he would start very low—perhaps a couple hundred feet off the ground—fly through the plume, turn around and go back through at about 100 feet higher. He would do this until he reached the top of the plume, which could take anywhere from about 16 to 35 passes. Adding these slices up would give him the total emissions from the plume at that time.
Even after the first flight, the methane readings alarmed him.

“It was 20 times larger than anything else we’d ever measured—it was just kind of a shock,” said Conley, who recalled thinking, “What in the world was this big?”

With the leak’s pollution equivalent to annual emissions from half a million cars, the disaster will substantially affect California’s ability to meet greenhouse gas emission targets for the year, added Tom Ryerson of the National Oceanic and Atmospheric Association (NOAA). “Our results show how failures of natural gas infrastructure can significantly impact greenhouse gas control efforts,” he said.

In a blog post Thursday, Environmental Defense Fund chief scientist Steven Hamburg noted that Conley’s results were “much higher than those provided by the gas company.”

But that’s not surprising, he continued, explaining that “accurately measuring these large sources is difficult using ground-based approaches like those used by the gas company to estimate the size of emissions from the facility.”

Significantly, Hamburg wrote, the study comes days after the Environmental Protection Agency (EPA) released draft results of their updated accounting of methane emissions from the nation’s oil and gas supply chain that shows that emissions are up 27 percent above the agency’s early estimate.

“The more we know about methane emissions, the higher they get,” he said. “The new findings show not just the massive scale of the oil and gas industry’s methane problem, but also how critical it is to get the science right to both understand this source of a potent climate pollutant and reduce it. We know that cutting methane is one of the fastest, most cost effective ways to curb today’s warming, and when combined with critical efforts to reduce carbon dioxide pollution, substantial climate progress can be made.”

The Aliso Canyon disaster has prompted calls from members of Congress for the federal Pipeline and Hazardous Materials Safety Administration to create the first federal standards for underground gas storage.

But with more than 300 such facilities across the U.S., the leak “is just the latest and most public example showing that we need to keep natural gas in the ground, not burn it,” as Earthworks executive director Jennifer Krill wrote last month.

Indeed, Sierra Club’s Michael Brune declared in a January blog post: “As long as we rely on fossil fuels for energy—and much of the methane that’s leaking from Aliso Canyon was intended for California’s power plants—we will be fighting climate disruption with both hands tied behind our backs.”

“Only when we achieve 100 percent clean energy will we truly be able to safeguard our health, our environment, and our climate,” he said. “For the unlucky people in the path of the next fossil fuel disaster—and they could be anywhere—that day can’t come soon enough.”