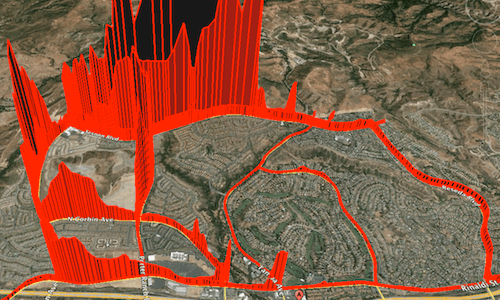 It now looks like the catastrophic Porter Ranch gas leak, which has spewed more than 83,000 metric tons of noxious methane for nearly three months, has spread across Los Angeles’s San Fernando Valley.

On Wednesday, Los Angeles City Councilman Mitchell Englander called on the Southern California Gas Co. to extend residential relocation assistance to residents in Granada Hills, Chatsworth and Northridge who live near the Aliso Canyon gas leak above Porter Ranch. These residents reported symptoms related to the exposure of natural gas such as nausea, vomiting, headaches and respiratory problems.

This latest development compounds with a new analysis from Home Energy Efficiency Team (HEET). The Cambridge-based nonprofit sent Boston University Professor Nathan Phillips and Bob Ackley of Gas Safety to take methane measurements around the San Fernando Valley for several days and their findings were disturbing.

As the Los Angeles Daily News wrote, “the researchers recorded elevated levels of the main ingredient in natural gas—10 miles away from the nation’s largest gas leak.”

“It’s not just in Porter Ranch, it’s going all the way across the [San Fernando] Valley,” Ackley told Inside Climate News.

According to HEET, the researchers drove a high precision GIS-enabled natural gas analyzer down the roads around the gas leak to create a comprehensive map of the leak around San Fernando Valley. The red on the map indicates where they drove and the levels of methane they found is shown by the height of the peaks.

Their monitors showed methane levels at 3.4 parts per billion, about twice the level of natural clean air, the Los Angeles Daily News reported. Another measurement showed 127 ppm, or an astounding 67 times above normal.

“Whatever else may be in the gas—benzene, toluene, xylene—that is what people may be breathing,” Phillips told Inside Climate News. “Even though we’re not measuring things other than methane, there is a legitimate concern that there is that other nasty stuff in there.”

Dozens of public health and environmental advocates and experts will rally at the U.S. Environmental Protection Agency headquarters in Washington, DC tomorrow to press for federal action on the Porter Ranch leak.

“It’s an invisible tsunami of methane.”

Friday’s rally, organized by members from Food & Water Watch and other organizations, will ask the U.S. EPA to intercede and permanently shut down operations at a blown-out gas storage facility in California.

Southern Caliifornia Gas Co. has evacuated more than 2,000 residents living near the leak since October. Porter Ranch was officially declared a state of emergency by California Gov. Jerry Brown, however, advocates have criticized his slow response to the escalating public health crisis.

“For months, Governor Brown and California authorities sat on their hands as this gas blowout crisis deepened and scores got sick,” Food & Water Watch Executive Director Wenonah Hauter said. “Now it’s a matter of ‘too little, too late’ from the governor, and the people of Porter Ranch are desperate for federal intervention to end this catastrophe and ensure it never happens again.”

On Saturday, in Granada Hills, California, hundreds of residents of Porter Ranch will rally and testify at the second hearing on a stipulated Order for Abatement—which requires a company operating out of compliance to take specific actions or to shut down its operation to come into compliance—over the Porter Ranch Gas Leak.

Southern Caliifornia Gas Co. said in a statement that methane leakage has been slowly falling. Estimates by the California Air Resources Board showed an estimated 60-percent reduction from peak levels in late November.

The gas company is currently drilling a relief well in an effort to plug the leak, the Los Angeles Daily News reported. The effort, however, could take months.

“We’ve drilled to a depth of approximately 7,000 feet (and) we have to drill to a depth of over 8,000 feet, and remain on schedule to complete this process between late February and late March,” company spokesman Raul Gordillo said.