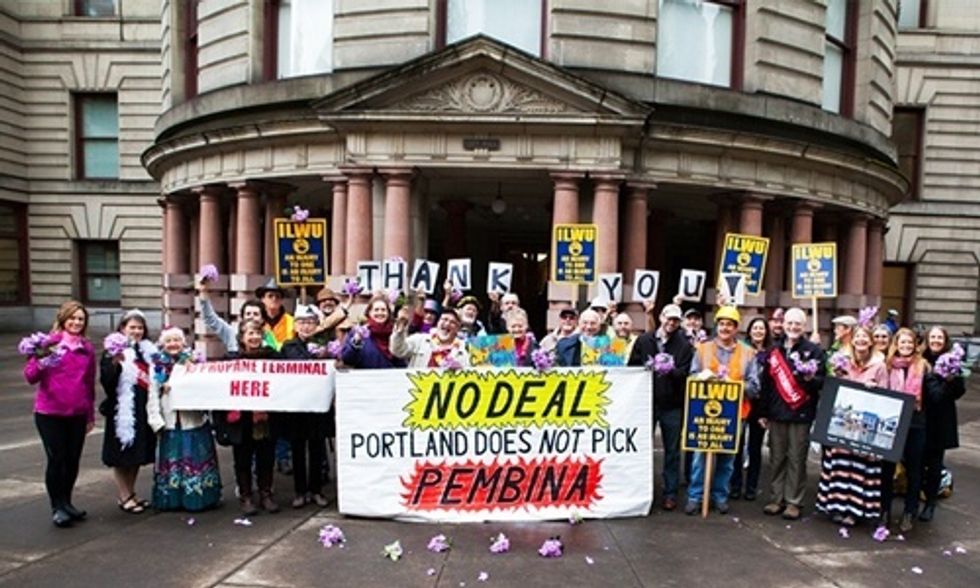 In a unanimous vote on Tuesday, Port of Longview commissioners rejected a proposal by Waterside Energy to build the first oil refinery on the west coast in 25 years. The commissioners also rejected Waterside's plan for a propane export terminal. Longview, Washington residents are celebrating and thanking their elected port commissioners.

“I've taught near oil refineries—the smell was hard to live with, but the rate of childhood cancer was devastating. Today, the port commission did the right thing for Longview's children," said Krista Mead, teacher at Columbia Valley Garden Elementary School.

I See a Pattern Here

In 2010, as fracking boomed and coal companies looked desperately for overseas buyers, a dozen coal, oil and gas export proposals threatened the Pacific Northwest and, particularly, the Columbia River where I work. But one by one, communities are standing up for clean water and air by rejecting dirty fossil fuels.

The State of Oregon rejected the Morrow-Pacific coal export terminal because of the impacts on salmon and fishing. Longview rejected Haven Energy's propane export terminal, primarily because the proposal would create too few jobs per acre. Portland rejected Pembina's propane terminal for climate and public health reasons and then, for good measure, banned all new fossil fuel exports. Global Partners' oil terminal near Clatskanie, Oregon, shut down because of the economics of unpredictable crude oil prices.

The pattern is obvious, but I'm fascinated by the reasons for rejecting these projects. Salmon. Jobs. Climate. Health. Economy. These values are prevailing over fossil fuel.

Despite the tide of opposition, a few large fossil fuel projects are still seeking permits. Tesoro and Savage want to build the nation's largest oil-by-rail terminal—a whopping 360,000 barrels per day—in Vancouver, Washington. And Longview is not out of the woods yet: a 44-million-ton per year coal export terminal wants to call Longview home. But the smart money is on salmon, jobs, climate, health and economy—aggressively defended by local activists in small towns and big cities.