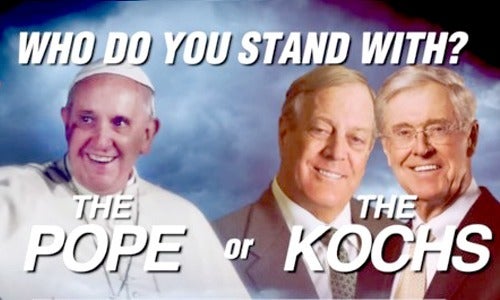 Pope Francis is shaking up the world with his activism on climate change. Fossil fuel billionaires Charles and David Koch have vowed to spend nearly $900 million to put a climate denier in the White House. And Republican candidates for president such as Jeb Bush and Rick Santorum have been telling the Pope to mind his own business. Could there be a connection?

To highlight the contrast and call out the candidates, the progressive advocacy group Americans United for Change has just launched a campaign called Pope or Kochs. 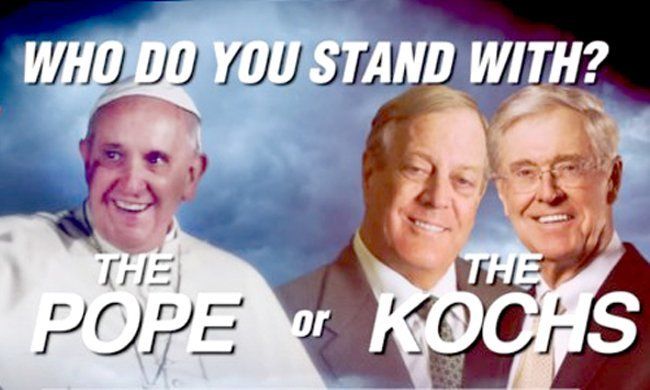 “Climate change is a moral issue,” it says. “The Pope’s message underscores to people of faith the obligation we have to future generations to address climate change and protect our environment.”

But, it adds, “The Kochs are bankrolling the anti-Pope movement. The Kochs sent their stooges at the Heartland Institute to try to change Pope Francis’ mind on climate change … and attack his character when he refused.”

The campaign’s website provides a hair-raising checklist of the potential presidential candidates the Koch brothers might put their money behind, as well as fellow-travelers like Sen. Jim Inhofe, who has repeatedly called global warming a “hoax,” oil industry-funded Texas congressman Joe Barton, who has also told the Pope to butt out of climate issues, and Rush Limbaugh, who called the Pope a Marxist. 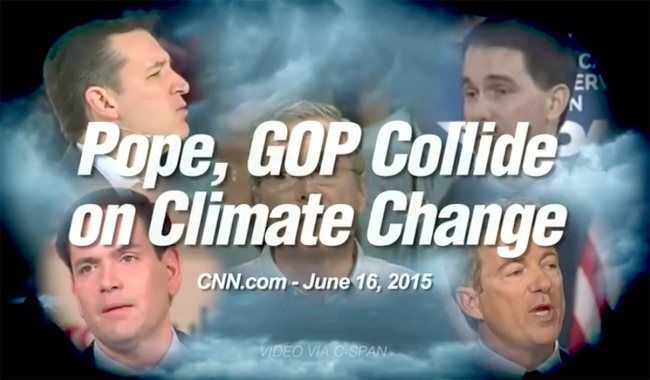 The Pope or Kochs website highlights quotes from candidates Jeb Bush, Marco Rubio, Ted Cruz, Rand Paul, Scott Walker, Rick Santorum, Rick Perry, Mike Huckabee and John Kasich, as they all appear to be auditioning for the Koch money. They include Bush’s direct putdown of the Pope’s climate activism, in which he said “I don’t get economic policy from my bishops or my cardinals or my pope. I think religion ought to be about making us better as people, less about things [that] end up getting into the political realm.”