Pope Francis's Encyclical Makes Waves from Brazil to the Philippines 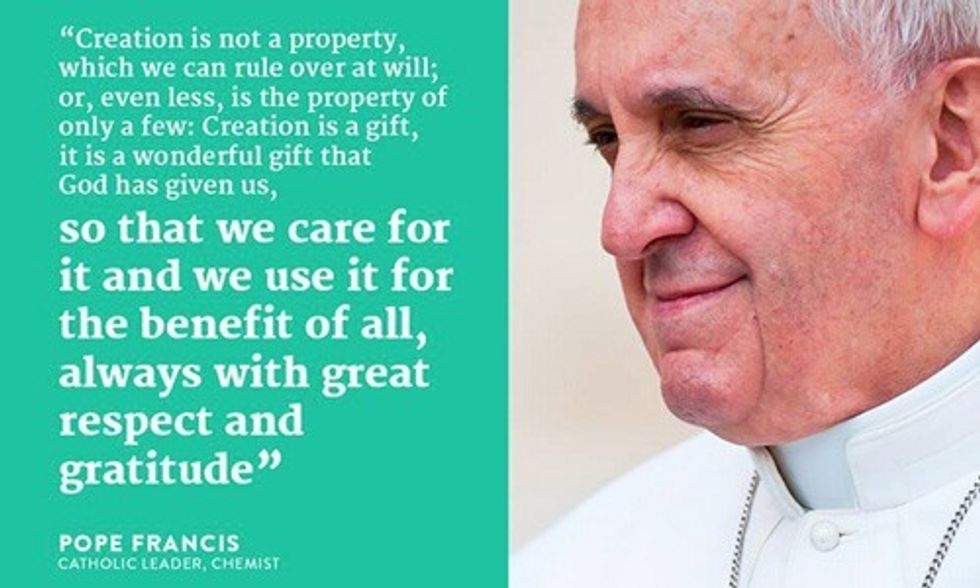 With the release of Pope Francis’ landmark encyclical last week, it seems the whole world was talking about climate change. Two Catholic Climate Reality Leaders share their perspectives from Brazil and the Philippines.

"We need to strengthen the conviction that we are one single human family. There are no frontiers or barriers, political or social, behind which we can hide, still less is there room for the globalization of indifference.” —Pope Francis

Although we hail from two different continents, speak many different languages and represent two different hemispheres of this Earth, last week was momentous for both of us. That’s because before we became Climate Reality Leaders, we were Catholics, each guided by our faith to love God’s Earth and be good stewards of creation—all living creatures and the planet.

Last week, Pope Francis delivered a historic encyclical—a letter from the pope to Catholic communities around the world—about the interrelatedness of the economy, the environment, and equity entitled Laudato Si’: On Care For Our Common Home.

Pope Francis is not just writing to Catholics in his encyclical. He also hopes it will help people around the world—no matter their faith or creed—understand how the destruction and degradation of our environment is not only harming the home we all share, but also having especially devastating consequences for the poorest among us. It’s a reminder that if we want to solve climate change and poverty, we need to address both at the same time, and that by caring for our world and pursuing a more sustainable way of life, we can lift up the neediest out of poverty and ensure a peaceful, prosperous, and healthy world for future generations.

The eco (or green) encyclical, Laudato Si’, acknowledges that mankind is responsible for climate change and its devastating effects, especially on the poor. Although the encyclical is not a scientific document, it aims to engage society on the facts of climate science and create a sense of urgency for mankind to take action:

"Climate change is a global problem with grave implications: environmental, social, economic, political and for the distribution of goods. It represents one of the principal challenges facing humanity in our day. Its worst impact will probably be felt by developing countries in coming decades. Many of the poor live in areas particularly affected by phenomena related to warming, and their means of subsistence are largely dependent on natural reserves and ecosystemic services such as agriculture, fishing and forestry. They have no other financial activities or resources which can enable them to adapt to climate change or to face natural disasters, and their access to social services and protection is very limited." (Pope Francis, Laudato Si': On Care For Our Common Home, no. 15)

Faith can move mountains and, combined with scientific facts, can open people's hearts and minds in a powerful way. The pope clearly sees that fighting climate change and restoring the Earth's ecosystems is a moral duty we have to our fellow humans, to future generations and to Creation itself. This is a message that we find in the sacred texts of many other religions. Caring for the Earth is caring for the common good.

As Climate Reality Leaders, we strive to live by these teachings every day and this encyclical will only help to affirm and strengthen the work we do.

Sergio, who lives in Brazil, has worked with priests and Catholic leaders in Rio de Janeiro to take action with simple initiatives in their churches, and in the Catholic University to reduce waste and energy consumption. He engages the community in discussions of climate change and sustainability to preserve God’s creation.

Brother Jaazeal lives in the Philippines and has also worked with Catholics and people of other faiths to combat climate change. He is especially active in engaging young people in the Philippines to raise consciousness of environmental destruction and solutions for a greener future through art-making.

We both are amazed at how many hearts and minds are touched when we bring science and faith together in a meaningful way. With Pope Francis's encyclical and his determination to engage the Catholic community in discussions of climate change, we now have one more powerful ally on our side.

This encyclical reaffirms longstanding Catholic teachings on stewardship and social justice, which, like so many other faith traditions, recognize and affirm the mystery, grandeur and power of God that can be found in nature.

Our work in our own communities and with people of other faiths has been building towards this moment. We hope this call to action reaches beyond the Catholic Church and into the hearts of everyone who understands the moral obligation we have to protect our resources and those most afflicted by climate change. You can start today, in fact, by taking action now:

We are all proud to support Pope Francis as he takes this bold step forward in calling for climate action and will redouble our efforts to engage our communities.

We invite you to do the same.