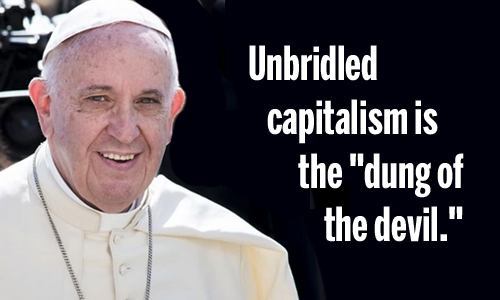 In a far-reaching speech in Bolivia on Thursday, Pope Francis offered his apologies to, and begged forgiveness from, the native people of the Americas as he acknowledged the brutal treatment they received throughout the so-called “conquest of America.”

In a speech that also touched on the need to rapidly move away from the destructive model of unbridled capitalism—which he described as the “dung of the devil”—Francis went much further than any of his predecessors in accounting for the crimes of the Church while it pursued and perpetuated colonialism and oppression across Latin America and beyond over the last five centuries. 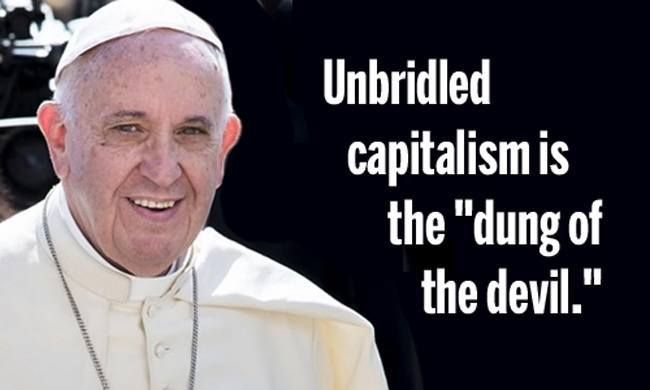 “I wish to be quite clear,” said Francis. “I humbly ask forgiveness, not only for the offenses of the church herself, but also for crimes committed against the native peoples during the so-called conquest of America.” He added, “There was sin and an abundant amount of it.”

In response, it was reported, the large crowd offered rousing applause.

The speech was delivered to a regional gathering of Indigenous people and social justice activists attending the Second World Meeting of the Popular Movements and followed remarks from Bolivian President Evo Morales—the nation’s first-ever Indigenous person to hold the office.

Following his remarks, Adolfo Chavez, a leader of a lowlands Indigenous group, told reporters, “We accept the apologies. What more can we expect from a man like Pope Francis? It’s time to turn the page and pitch in to start anew. We Indigenous were never lesser beings.”

Campesino leader Amandina Quispe, of Anta, Peru, however, said the Church still holds lands it should give back to Andean natives in her country. The former seat of the Inca empire, conquered by Spaniards in the 16th century, is an example.

“The church stole our land and tore down our temples in Cuzco and then it built its own churches—and now it charges admission to visit them,” Quispe told the Associated Press.

The apology was significant given the controversy that has erupted in the United States over Francis’ planned canonization of the 18th century Spanish priest Junipero Serra, who set up missions across California. Native Americans contend Serra brutally converted indigenous people to Christianity, wiping out villages in the process, and have opposed his canonization. The Vatican insists Serra defended natives from colonial abuses.

Francis’ apology was also significant given the controversy that blew up the last time a pope visited the continent. Benedict XVI drew heated criticism when, during a 2007 visit to Brazil, he defended the church’s campaign to Christianize indigenous peoples. He said the Indians of Latin America had been “silently longing” to become Christians when Spanish and Portuguese conquerors violently took over their lands.

Elsewhere in the speech—described as the longest and most important of Francis’ three-nation South American trip—the Pope also spoke boldly about the global need to move swiftly away from policies that are generating mass poverty, unparalleled inequality, and suffering around the world.

“Let us not be afraid to say it: we want change, real change, structural change,” the Pope declared, as he blasted a system of unbridled capitalism across the planet that “has imposed the mentality of profit at any price, with no concern for social exclusion or the destruction of nature.”

As the Guardian noted, the pontiff also appeared to take a swipe at international monetary organizations such as the IMF and the development aid policies of leading nations that have demanded deep and painful “structural reforms” in exchange for funds or assistance—behavior he described as a new form of colonialism.

“No actual or established power has the right to deprive peoples of the full exercise of their sovereignty. Whenever they do so, we see the rise of new forms of colonialism which seriously prejudice the possibility of peace and justice,” he said. “The new colonialism takes on different faces. At times it appears as the anonymous influence of mammon: corporations, loan agencies, certain ‘free trade’ treaties, and the imposition of measures of ‘austerity’ which always tighten the belt of workers and the poor.”

In the end, Francis echoed the message of his recently published encyclical on the environment by once again demanding the world act immediately and forcefully on climate change. He called it “cowardice” for political leaders to continue their failure on the issue.

Invoking the UN summit on climate change taking place later this year in Paris, Francis said the planet is currently “being pillaged, laid waste and harmed with impunity” while “one international summit after another takes place without any significant result.”