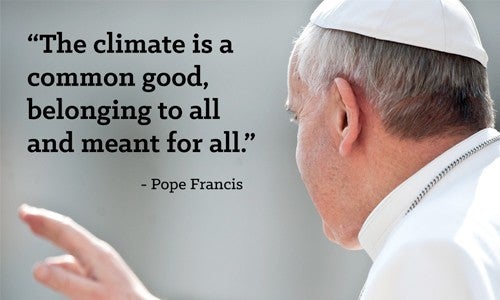 Yesterday, Pope Francis didn’t miss an opportunity to press for support for the environment while speaking at Saint Peter’s Basilica. As part of the first celebration of “World Day for Prayer for the Care of Creation,” which the pontiff organized, the Pope called on the rich and powerful to take care of the Earth.

The pontiff, speaking at St. Peter’s Basilica, asked God to enlighten “those who hold power and money so that they avoid the sin of indifference … and take care of the world we inhabit.”

The Pope’s encyclical is still making waves around the world and many are eagerly awaiting his first visit to the U.S. later this month, where he will meet with members of the UN in New York, attend the Vatican-sponsored World Meeting of Families in Philadelphia and speak to President Obama and Congress in Washington, DC.

There has been much speculation that the Pope will use the opportunity to urge world leaders, particularly the President and Congress, to take urgent action to address climate change and make a strong commitment at the UN climate talks in Paris in December.

Today is the World Day of Prayer for the Care of Creation. Let us work and pray. — Pope Francis (@Pontifex) September 1, 2015

A great challenge: stop ruining the garden which God has entrusted to us so that all may enjoy it. — Pope Francis (@Pontifex) July 2, 2015

Many things have to change course, but it is we human beings above all who need to change.

We know how unsustainable is the behaviour of those who constantly consume and destroy.

What kind of world do we want to leave to those who come after us, to children who are now growing up?

The earth, our home, is beginning to look more and more like an immense pile of filth.