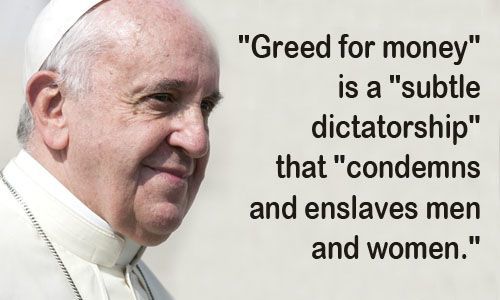 The latest call for a youth uprising against global capitalism came not from grassroots groups, but from the leader of the Catholic Church, who on Sunday gave a rousing speech during which he told a crowd of young people in Paraguay that it is their time to “make a mess.” 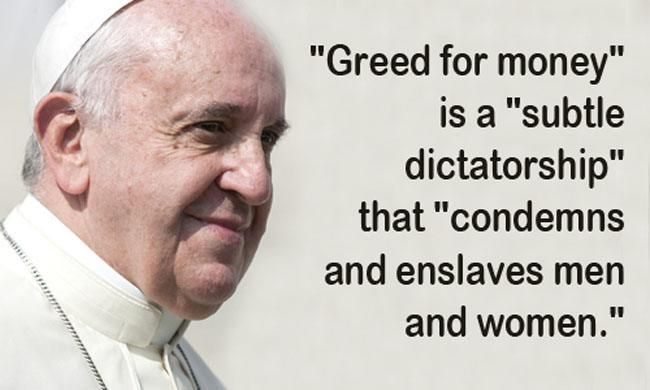 The address marked the end of Pope Francis’ week-long pilgrimage to Latin America, during which he also assailed the prevailing economic system as the “dung of the devil,” saying that the systemic “greed for money” is a “subtle dictatorship” that “condemns and enslaves men and women.”

Pope Francis issues a stunning rebuke & calls the greed of capitalism a “subtle dictatorship” that “condemns and enslaves men and women.”

During Sunday’s rally, which was held on the banks of the Paraguay River outside the capital Asunción, the Argentinian pontiff went off-script as he addressed tens of thousands of local youth.

He also encouraged those present to look at their less fortunate peers, some of whom he met earlier in the day during a visit to the Banado Norte shantytown, and spoke of the connection between authentic liberty and responsibility and the necessity of fighting for the right to lead a dignified life.

“We don’t want young weaklings. We do not want young people who tire quickly, who live life worn out with faces of boredom. We want youths with hope and strength,” Francis told the crowd.

Pope Francis’ South American visit comes just week after the release of his Papal Encyclical, which many hailed as a “radical statement,” in which he told leaders of the Catholic Church that there is a moral imperative for addressing climate change.