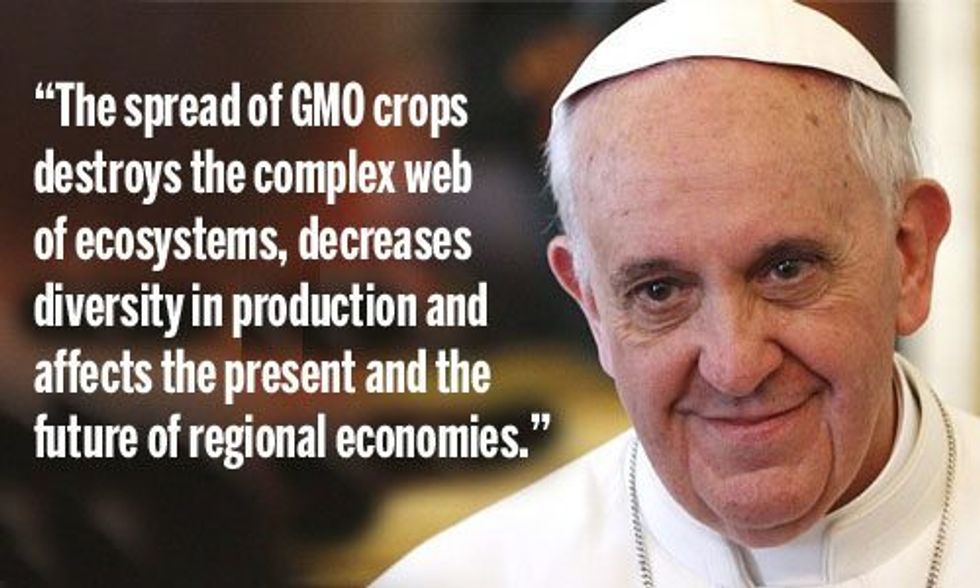 Pope Francis’s encyclical didn’t just cover climate change, he also denounced pesticides and genetically engineered (GE) crops, declaring “the spread of these crops destroys the complex web of ecosystems, decreases diversity in production and affects the present and the future of regional economies.”

The Pope’s message couldn’t come at a better time. Pesticide use is at an all-time high. The U.S. Department of Agriculture says glyphosate use on corn and soy increased from 10 million pounds in 1996, the year Roundup Ready crops were introduced, to 204 million in 2013. The U.S. Geological Survey routinely finds glyphosate in our water. The Word Health Organization just declared glyphosate a probable carcinogen.

The Pope observed that pesticide use “creates a vicious circle in which the intervention of the human being to solve a problem often worsens the situation further.” He said, “many birds and insects die out as a result of toxic pesticides created by technology ... [and this] actually causes the Earth we live in to become less rich and beautiful, more and more limited and gray …”

Pesticides have already made our Earth less rich and more gray by nearly wiping out monarch butterflies, which have declined by 90 percent, largely because increased glyphosate use has wiped out the monarch’s sole host plant, milkweed. Pesticides are a leading cause of our current pollinator collapse. With one-third of the bites we eat requiring bee-pollination, many world leaders, including President Obama, are waking up to the need for action.

Like Pope Francis, I believe protecting the Earth is our moral imperative. With this encyclical, the Pope reminds us that our fates are intertwined with all species, and calls us to action.