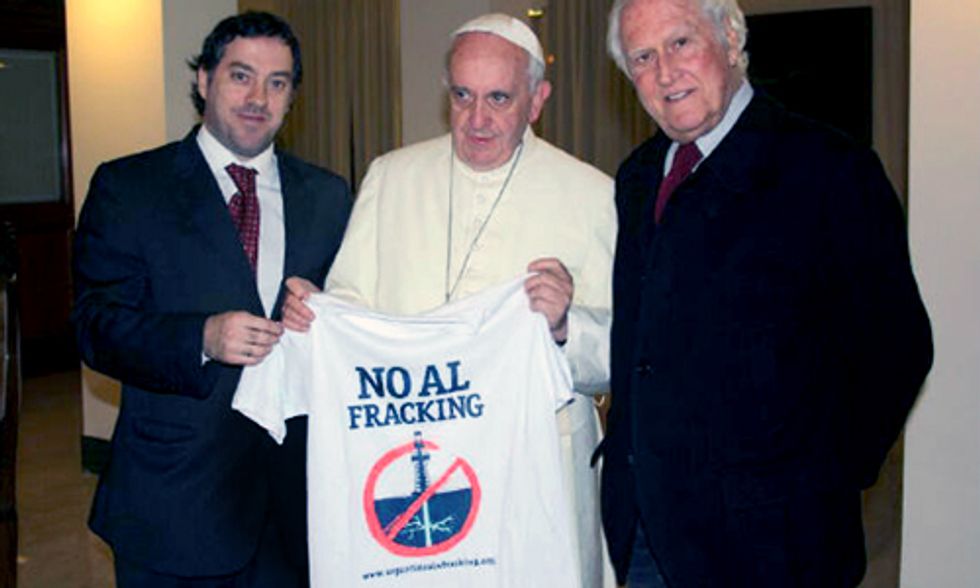 We've been busy lately providing news on all the great ways Pope Francis is working to create a healthy, sustainable planet. In July 2014, Pope Francis called destruction of nature a modern sin. In November 2014, Pope Francis said "unbridled consumerism" is destroying our planet and we are "stewards, not masters" of the Earth. In December 2014, he said he will increase his call this year to address climate change. And, last week we announced that Pope Francis is opening his Vatican farm to the public.

Now, we learn from Nicolás Fedor Sulcic that Pope Francis is supportive of the anti-fracking movement. Watch this interview by Fernando Solanas where he met with Pope Francis soon after finishing a film about fracking in Argentina.

The movie, La Guerra del Fracking or The Fracking War, was banned in cinemas by the Argentinian government, so the filmmakers decided to post it on YouTube. We are awaiting translation of the film and then we'll feature it on EcoWatch.

"When I was doing research for the film, every time I'd ask someone if they knew what fracking was they had no idea," said Sulcic. The problem was that "the government didn't call it fracking, they called it 'non conventional gas' so no one was making the link to what was happening in Argentina to what was happening America. I got really mad and knew something had to be done to make people aware of what was going on. I saw the website Artist Against Fracking and felt that was a very good example of what was needed to be done here to take the cause to more people rather than just environmental activists."

Pope Francis: We Are 'Stewards, Not Masters' of the Earth