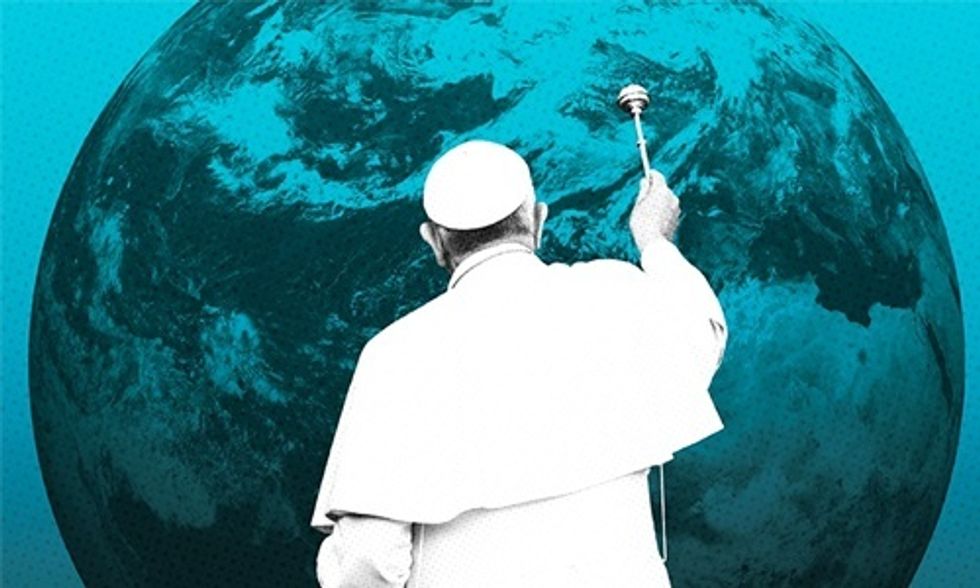 On Friday, the Center for Earth Jurisprudence, on behalf of the Global Catholic Climate Movement and the Leadership Council of Women Religious filed an amicus curiae brief in support of the constitutional climate change lawsuit brought by 21 young plaintiffs from across America.

The Global Catholic Climate Movement is an international network of more than 250 Catholic organizations and individuals, including Pope Francis and Catholic bishops. The Catholic group is raising a strong voice in global climate change discussions, relying on the Pope’s recent encyclical, Laudato Si’: On Care for Our Common Home. The Leadership Council of Women Religious represents leaders of more than 40,000 women religious across the U.S. and the world.

“As an organization inspired by the principles of Laudato Si’, the Global Catholic Climate Movement welcomes the opportunity to support the young plaintiffs,” Tomas Insua, Global Coordinator with the Global Catholic Climate Movement, said. “Laudato Si’ reminds us that ‘Intergenerational solidarity is not optional, but rather a basic question of justice, since the world we have received also belongs to those who will follow us.’ By supporting this initiative, we join our voices with the young plaintiffs who are calling for climate justice and the protection of the atmosphere for generations to come.”

The Catholic brief details how youth’s constitutional litigation “seeks to establish precisely what Pope Francis has urged in Laudato Si’: a ‘legal framework which can set clear boundaries’ for greenhouse gas reduction—before it is too late.” Both groups state that, by including the public trust doctrine as part of their case, the young plaintiffs invoke the same moral imperative that motivates the religious work they do. For Global Catholic Climate Movement and Leadership Council of Women Religious, the public trust principle of law mirrors a “sacred trust” based on the Church’s deep covenants of obligation towards future generations and to all Creation.

Speaking at the White House last September, Pope Francis urged action, stating, “Climate change is a problem which can no longer be left to a future generation. When it comes to the care of our ‘common home,’ we are living at a critical moment in history.” The Catholic groups’ brief reiterates the words used by Pope Francis:

"It is no longer enough, then, simply to state that we should be concerned for future generations. We need to see that what is at stake is our own dignity. Leaving an inhabitable planet to future generations is, first and foremost, up to us ... The effects of the present imbalance can only be reduced by our decisive action, here and now ... We know that technology based on the use of highly polluting fossil fuels—especially coal, but also oil and, to a lesser degree, gas—needs to be progressively replaced without delay."

In their filing before Judge Coffin, the Catholic groups assert: “With so little time remaining to curb carbon dioxide emissions before the planet crosses irrevocable climate thresholds, [the] Court should enforce government’s duty to protect the children’s atmospheric trust before it is too late to salvage a habitable planet.”

“The Center for Earth Jurisprudence is honored to support the Amici in this case who stand in solidarity with the youth plaintiffs seeking future and intergenerational justice,” Sister Pat Siemen said. “The constant threats of climate change and increased GHG emissions assail the rights of nature, in this case, our atmosphere. We hope the court understands the message of Pope Francis, in his encyclical Laudato Sí, where he states: ‘the notion of the common good also extends to future generations … Intergenerational solidarity is not optional, but rather a basic question of justice, since the world we have received also belongs to those who will follow us.’”

“Our moral call to protect the common good (and not the profits of a selfish few) is clear in the Pope’s call to action,” 14-year-old plaintiff Nick Venner said. “The support of the Leadership Council of Women Religious, representing women who have been quietly at the forefront of every major civil rights movement and helping children and the poor, means a lot to me. To have our lawsuit championed by the Global Catholic Climate is so exciting—Catholics around the world uniting in calling for change that will support life, not death and pollution. I thank God for their support in our fight to save our nation’s climate.”

7 Arrested in Solidarity With the People of Porter Ranch