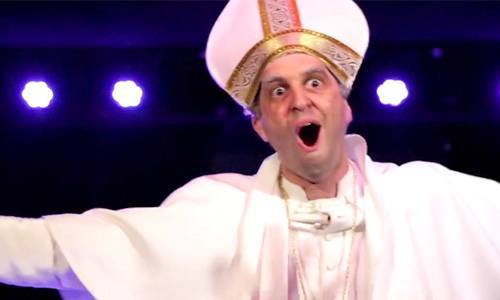 We’ve already seen the Pope in a hilarious over the top, Hollywood-style spoof trailer, but now DeSmogBlog has posted an awesome video in which Pope Francis (not the real one, unfortunately) gets up on stage at an open mic night to drop a few rhymes, and then drops his mic.

Here’s one of the many gems from the video: “I’m wise to your ridiculous math trick. Is the climate changing? Is the Pope Catholic?”

And wait until you see what he has to say about climate deniers! The Pope’s encyclical has been highly anticipated for months with some scientists saying it could have a bigger impact than the Paris climate talks. A draft of the document was even leaked early by an Italian magazine on Monday, but now the official papal document has been released today.

Check out this hilarious rap: