Pope Francis' Historic Visit to the U.S. Will Be a Climate Game-Changer 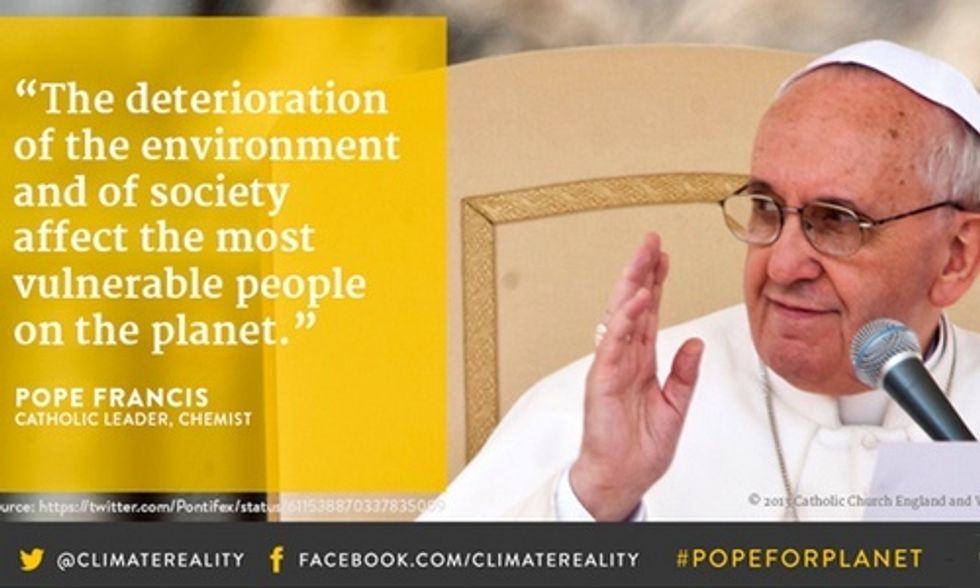 Just in time, hopefully, the leader the world needs on the climate crisis has stepped forward: Pope Francis.

What other person known worldwide, with an international following and with the power—spiritually and politically—to have an impact is doing what the Pope has done so far, since he was named Pope in the spring of 2013? Two months ago he released Laudato Si, a Papal encyclical which has many important and strong things to say about the climate crisis, linked to other important statements about the broader environmental crisis, poverty, economic inequality and injustice, consumerism and more. He has followed up with well-publicized meetings on these topics at the Vatican.

This encyclical follows a number of statements Pope Francis has made about the climate crisis since taking office.

And in two months, he will be in the U.S. speaking before the U.S. Congress on Sept. 24 and the United Nations General Assembly on Sept. 25.

All of this activity is taking place now as an effort on the Pope’s part to influence what comes out of the United Nations Climate Conference in Paris at the end of the year. He is trying to shake up governments around the world who give lip service to the need for action on climate and who, in some cases, have moved to shift their economies away from fossil fuels and onto the renewables and efficiency path. However, taken collectively, not enough is being done, especially by the industrialized countries most responsible for the crisis, no question about it. The coal, oil and gas industries continue to exert significant influence over government policy in the U.S., Canada, Australia and elsewhere.

Given the power and influence of the U.S. over what is going to happen in Paris and on the climate crisis generally, it is very strategic for the Pope to be coming here just two months before that conference begins.

Is there much happening on the part of the climate movement to welcome and support the Pope when he arrives? Yes and no.

Forty groups so far, a number of them faith-based, have joined together to organize a “Moral March for Climate Justice” on the morning of Sept. 24 at the Lincoln Memorial, at the time the Pope is speaking to Congress. As that organizing proceeds and as the day gets closer, additional groups, including some large organizations with resources and memberships, are expressing interest. That is hopeful, since a number of “likely suspects” within the climate and climate justice movements have yet to indicate their appreciation of the historic and immediate potential of the Pope’s visit.

Two organizations, the Franciscan Action Network and Beyond Extreme Energy, have initiated calls for multi-day fasts in the days leading up to the Pope’s visit and they are working together to multiply their overall impact.

Beyond Extreme Energy’s (BXE) water-only fast will take place from Sept. 8 to Sept. 25 on the sidewalk outside the headquarters of the Federal Energy Regulatory Commission (FERC), as well as in other localities where people individually or in groups decide to take part. For more than a year, a campaign. has been underway to expose and bring pressure on FERC because of its role as a corrupt, rubber-stamp agency, virtually always saying yes to proposals from the natural gas industry to expand its infrastructure and, now, to export fracked gas around the world. For BXE, the fast, happening leading up to and during the time that the Pope is here, is a way to appeal to FERC employees and the general public to draw inspiration from the Pope to speak up and take action, as well as to support the frontline struggles against fracked gas infrastructure around the country.

The Franciscan Action Network fast will be connected with a global fast already underway through the #FastForClimate campaign and will involve a water-only fast as well as a fast from gratuitous carbon-emitting activities. It will be held at McPherson Square in downtown DC and will go from Sept. 15 to Sept. 23. Among the fasters will be Filipino Yeb Sano, who fasted for two weeks during the UN Climate Conference two years ago. The announced target of the fast are faith-rooted lawmakers who can connect with the spiritual underpinnings of the climate movement, as well as a global audience willing to fast in solidarity with those most impacted by the climate crisis.

An initiative is also being taken by progressive Rabbis and other Jewish climate activists to hold a Yom Kippur service at 6:30 p.m. on Sept. 22 at the Lincoln Memorial. They will re-gather on the morning of Sept. 23 and at 7:30 p.m. will be joined by the Franciscans, BXE fasters and others for an interfaith prayer vigil.

It is encouraging to see faith-based groups joining with some climate and environmental and other groups in this still-unfolding and developing, multi-day initiative centered in Washington, DC. There is still time for many more groups to join in to make September in DC and elsewhere an inspiring and spiritually deepening experience, a big step forward for our threatened ecosystem and all of its life forms around the world.