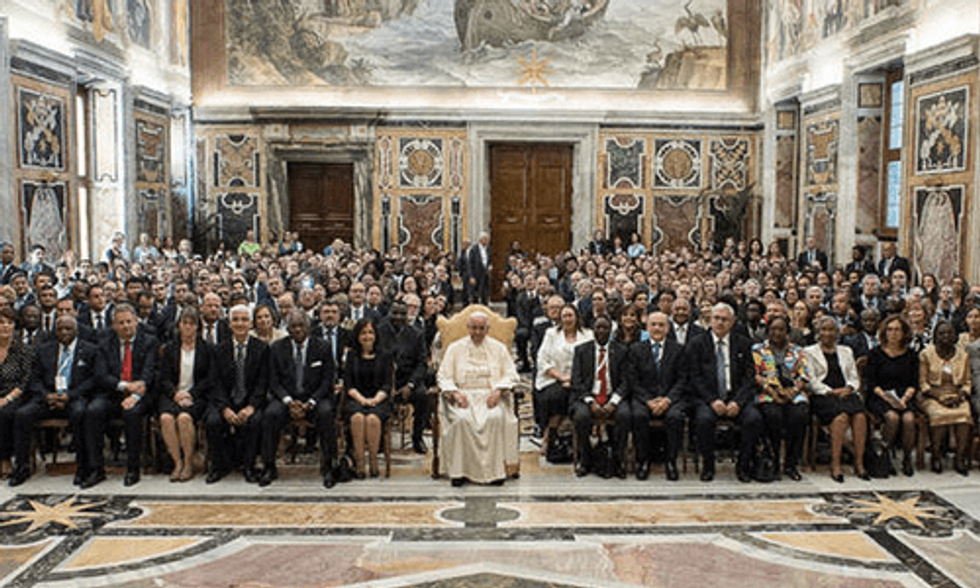 Ever the planetary steward, Pope Francis stressed the importance of food security, good nutrition and reducing food waste at the 39th United Nations Food and Agriculture Organization (FAO) conference at the Vatican yesterday.

Pope Francis with delegates of the 39th FAO Conference at the Vatican. Photo Credit: FAO

“Statistics on waste are very concerning: a third of food products end up under this heading,” the Pope said in front of representatives from more than 120 countries, citing FAO data showing the magnitude of edible food produced on the planet that is lost or wasted.

The Pontiff also voiced concerns over large-scale acquisitions of agricultural land by multinational companies and governments.

“Climate change rightly worries us, but we cannot forget financial speculation,” he continued, explaining how both global warming drives world hunger, as well as speculators who drive up market prices of basic foods such as grains, rice and soybeans purely for their own economic gain.

“It is unsettling to know that a good portion of agricultural products end up used for other purposes, maybe good, but that are not immediate needs of the hungry,” he said.

He emphasized that access to basic foods as "a right of all people."

Food "must be valued as the fruit of the daily toil of individuals, families, communities, farmers," Francis said.

According to a FAO press release, Pope Francis held a separate meeting with the organization's Director-General José Graziano da Silva, where the Pontiff stressed the importance of FAO's ongoing efforts to decentralize. He asked that FAO member nations work together to protect land and water resources, especially from multinational companies.

"If all Member states work for one another, consensus for action by FAO will not be late in arriving, and moreover, FAO's original role will be rediscovered—fiat panis, 'let there be bread,'" he said, in reference to the Latin phrase that appears on the FAO's logo.

He also urged that all consumers should "decisively commit" to modifying our lifestyles and using natural resources more sustainably.

"We must begin with our daily lives if we want to change lifestyles, aware that our small gestures can guarantee sustainability and the future of the human family," he said.

He concluded, "The Church with its institutions and its initiatives, walks with you, knowing that the Earth's resources are limited and their sustainable use is an urgent need for agricultural development and food security."

How Monsanto Gained Huge Control of the World’s Food Supply