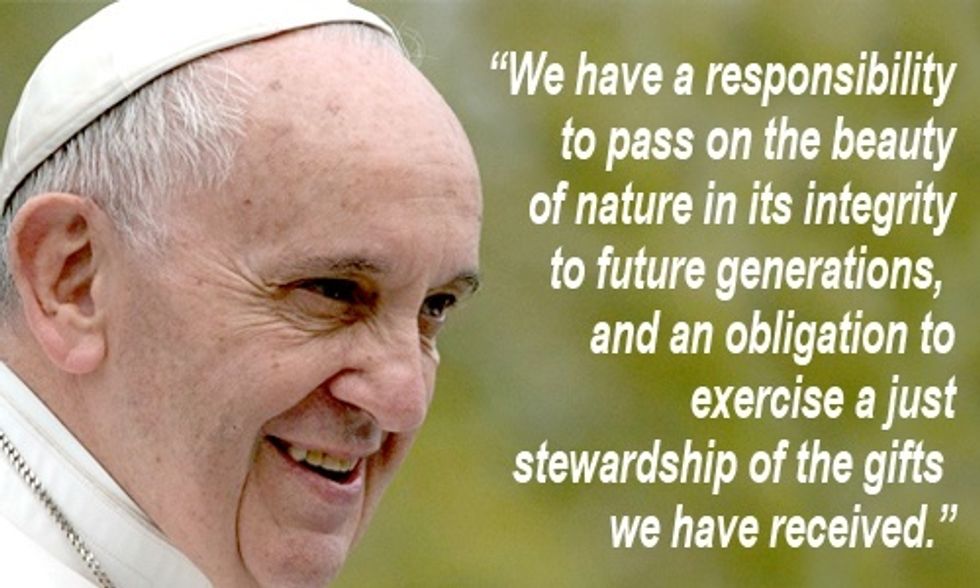 Pope Francis warned on Wednesday that the world is facing a "grave environmental crisis" and spoke of the intersection between social justice and the protection of nature.

The pontiff's comments, made in the Kenyan capital at the start of his first visit to the continent, come just days ahead of the UN climate summit in Paris, where global delegates will hammer out an agreement to curb climate change.

"The grave environmental crisis facing our world demands an ever greater sensitivity to the relationship between human beings and nature," Pope Francis said at the State House in Nairobi, where he spoke to President Uhuru Kenyatta and political leaders.

"We have a responsibility to pass on the beauty of nature in its integrity to future generations, and an obligation to exercise a just stewardship of the gifts we have received.

"In effect, there is a clear link between the protection of nature and the building of a just and equitable social order. There can be no renewal of our relationship with nature, without a renewal of humanity itself," he said, referencing his widely heralded encyclical.

"To the extent that our societies experience divisions, whether ethnic, religious or economic, all men and women of good will are called to work for reconciliation and peace, forgiveness and healing. In the work of building a sound democratic order, strengthening cohesion and integration, tolerance and respect for others, the pursuit of the common good must be a primary goal."

In addition to his stop in Kenya, Pope Francis' African trip will also include a stop in Uganda, but, the Washington Post reports, the focal point of his Africa trip appears to be the Central African Republic, where a war between Christians and Muslims has claimed more than 5,000 lives since 2013. The fighting there remains intense, and some security experts are surprised that Francis’s visit has not been canceled. It is the first time a pope has traveled to an active conflict zone.

There, Pope Francis is scheduled to meet with Muslims at the central Koudougou mosque in Bangui, the capital. Driving through the city, he is likely to see some of the thousands who have been displaced by the most recent spasm of violence.

Underscoring Francis' statement in his encyclical that there is "an urgent need to develop policies" to slash carbon emissions, the UN weather agency on Wednesday delivered "bad news for the planet"—2015 is on track to be the hottest year on record, and 2011-2015 has been the warmest five-year period on record.

Also on Wednesday, international aid group Oxfam expressed the inverse of the Pope's remarks, warning in a report that "Left unchecked, climate change could reverse decades of development in the world’s poorest countries."