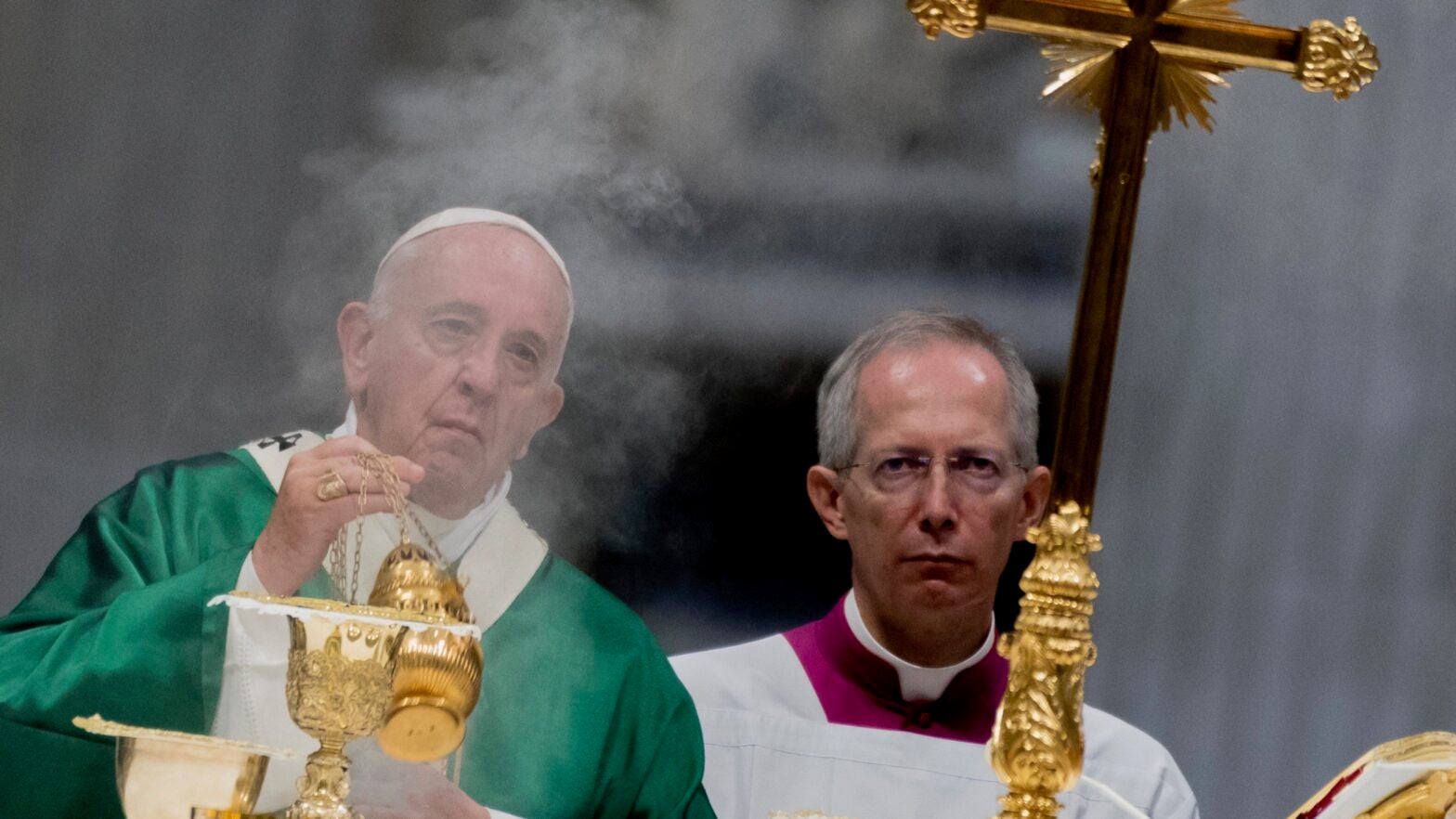 Pope Francis, in an effort to reignite his influence as a global environmental leader, released an impassioned document Feb. 12 entitled Dear Amazon — a response to the historic Vatican meeting last autumn regarding the fate of the Amazon biome and its indigenous people.

In a 94-page “exhortation,” Francis argued for the ecological importance of Amazonia — the world’s largest and most biodiverse tropical rainforest — describing the ecosystem services the biome provides, the region’s greatly beneficial weather, and the climate change mitigation the forest offers via carbon storage. The pope stressed that those best suited to protect the Amazon are the indigenous people who have lived there since time immemorial.

The document comes as the Amazon faces “deforestation at breakneck rates,” driven by illegal logging, mining, ranching and agribusiness in Peru, Bolivia, Colombia and Brazil, a nation that has also seen a sharp spike in killings of indigenous activists.

Dear Amazon isn’t only addressed to Catholics, but “to all persons of good will.” It sums up the findings of a three-week Vatican synod, a formal meeting held last October that brought together for the first-time hundreds of Catholic bishops, indigenous leaders and environmental activists from nine South American countries with territory in the Amazon. Francis’ post-synod response is organized into four “dreams:” societal, cultural, ecclesial and ecological.

His plea in defense of the rainforest is at once scientific, humanistic, political, and spiritual: “If the care of people and the care of ecosystems are inseparable, this becomes especially important in places where the forest is not a resource to be exploited; it is a being, or various beings, with which we have to relate,” Francis writes in the ecological section. “When indigenous peoples remain on their land, they themselves care for it best, provided they do not let themselves be taken in by the siren song and self-serving proposals of power groups.”

Francis joins with Amazon scientists and activists in their alarm. Rapidly escalating deforestation in the biome is already threatening the key goal of the 2015 Paris Agreement — keeping the world from overshooting a 1.5 degrees Celsius (2.7 degrees Fahrenheit) rise since the preindustrial era. The Paris accord specifically cites the carbon-sink-and-sequestration capacity, and vital importance, of large, intact forests as a reliable way to slow global warming.

Top scientists are already warning that climate change and deforestation could be causing the Amazon to cross a critical rainforest-to-savanna tipping point, at which time the biome could begin releasing vast sums of stored carbon, pushing the world toward climate catastrophe.

That warning comes as Brazil, which includes much of the Amazon basin, has been beset by wildfires and aggressive land grabbing. The Brazilian Amazon lost 3,475 square miles of forest — seven times the size of New York City — in 2019, a staggering 85 percent increase over 2018.

But as reported in the Jesuit magazine America, “Pope Francis’ words will certainly not please Brazil’s President Jair Bolsonaro who, on the eve of the exhortation’s publication, sent a proposed law to the Brazilian Congress that would permit mining activities within the reserves of indigenous peoples, including the Amazon region, without the people’s consent.”

Dear Amazon stands as an emphatic complement to Laudato Si, On Care for Our Common Home, a papal encyclical released in June 2015 with the express purpose of spurring a positive outcome to the United Nations negotiations that resulted in the landmark Paris Agreement that December. An encyclical is a Catholic teaching document of the highest order, possessing “moral authority.”

Laudato Si established Francis on the world stage as an ecumenical leader and advocate for environmental protection. He bluntly blamed human activity for global warming and castigated rampant consumerism and unbridled capitalism as hastening the destruction of the earth.

Myriad faith communities around the globe were inspired to organize and act on the pope’s urgings. However, the controversial manifesto met with mixed reviews in Latin America where some see conservation as a hindrance to economic growth and the relief of the poor in developing nations. Vatican officials have since touted climate action as a “moral imperative.”

The message of Dear Amazon seems even more urgent than the 2015 encyclical, coming in response to the rapidly worsening Amazon emergency: “We are water, air, earth and life of the environment created by God,” Francis writes. “For this reason, we demand an end to the mistreatment and destruction of mother Earth. The land has blood, and it is bleeding; the multinationals have cut the veins of our mother Earth.”

Laudauto Si was released when the progressive pope was at the height of global popularity, and it was heralded and cited for months by international media. But the urgent call of Dear Amazon has so far been largely ignored. Mainstream media accounts in the past week instead focused almost exclusively on Francis’ decision to not allow the marriage of priests serving in the Amazon as a way of boosting their dramatically diminished numbers.

The New York Times — which like other accounts stressed the Catholic church’s progressive and conservative political divide — went so far as to report that “his closest advisers have acknowledged that the pope’s impact has waned on the global stage, especially on core issues like immigration and the environment.”

Francis won’t likely be standing down without a fight. He calls on Latin American governments to enforce their environmental protection laws, return land rights to indigenous peoples, and recognize that Amazonian rainforests are more than an economic resource to be monetized for “extraction, energy, timber and other industries that destroy and pollute.”

“The equilibrium of our planet depends on the health of the Amazon region,” Francis writes. “Together with the biome of the Congo and Borneo, it contains a dazzling diversity of woodlands on which rain cycles, climate balance and a great variety of living beings also depend.”

Faith leaders contacted by Mongabay looked past Vatican politics and cheered the pope’s message in Dear Amazon, saying that it is invigorating their conservation work and strategies.

“Protecting rainforests is fundamentally an ethical issue, where care for creation and the realization of social justice for indigenous peoples and forest communities are part of one moral fabric,” said Joe Corcoran, the UN project manager for the Interfaith Rainforest Initiative (IRI), an NGO which lobbies for governmental climate action in six rainforest countries.

“Through IRI, we are seeing that not only is the leadership of Pope Francis rallying Catholics to act, but [it is] also inspiring religious leaders from other faiths to protect rainforests around the world,” Corcoran said. 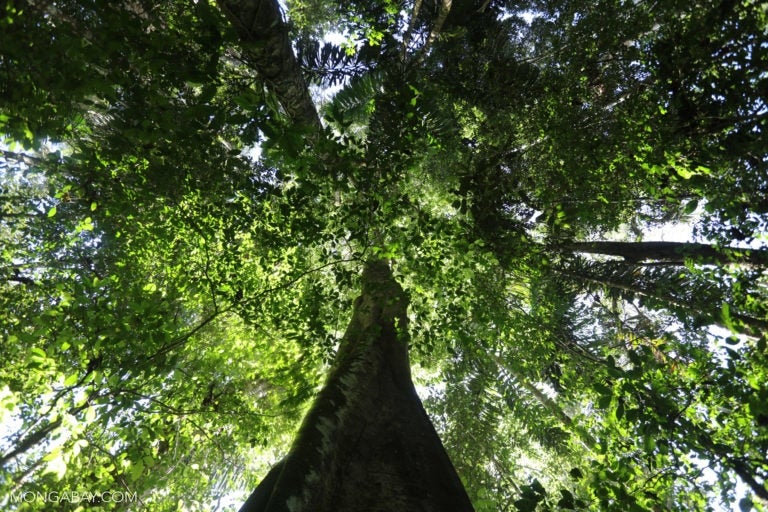 Seeing the Amazon gravely at risk, the Vatican has called on governments and the people of the world to protect the world’s largest remaining rainforest. Rhett A. Butler / Mongabay

Laura Vargas leads IRI’s initiatives in Peru: “I believe Dear Amazon marks a turning point for the whole life of the church in the Amazon and beyond its borders. If we believe everything is interconnected, we realize that what happens to the largest tropical forest in the world affects the entire planet.”

Meanwhile, at London-based Christian Aid, a global environmental activism organization, spokesman Joe Ware said, “The pope remains one of the most popular and loved pope’s with significant influence not just over one billion Catholics, but of many others, too.”

Ware stressed that 2020 is a crucial year, the year the Paris Agreement goes into force. The agreement remains dangerously incomplete as leaders of the industrialized world continue dragging their feet to establish aggressive carbon emission-reduction policies, even as time runs short to dramatically begin decarbonizing the global economy — the UN itself warned in 2018 that the world’s nations have just 12 years to act to avoid climate catastrophe.

“It’s vital,” Ware said, “that we have the voice of the Catholic Church and people of faith around the world pushing political leaders this year to make the boldest decisions possible.”