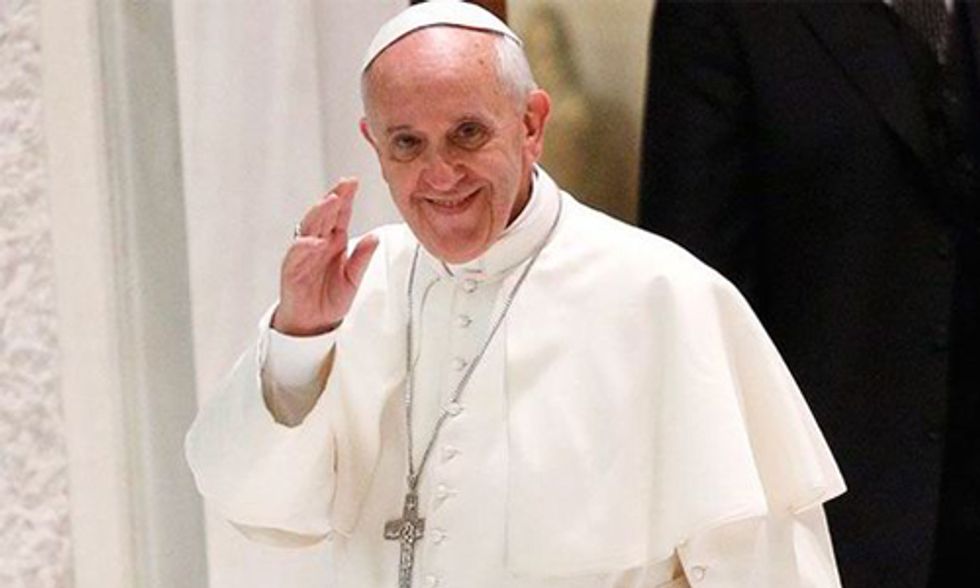 Pope Francis will be touring the Philippines today, including a visit with survivors of Super Typhoon Haiyan in Tacloban, which was devastated by the typhoon that killed 6,300 people in 2013. Catholic organizations around the world are taking this opportunity to call on the pope and Catholics worldwide to take meaningful action on climate change.

A new initiative, the Global Catholic Climate Movement, has formed in response to man-made climate change. The organization is made up of "laity, religious and clergy, theologians, scientists and activists from all over the world" who have "come together to care for God’s creation, for the poor (who are the most vulnerable to extreme weather events), and for our children (who will face the worst impacts)." The group has written a statement that will be given to Pope Francis by Cardinal Tagle, the Archbishop of Manila.

Another climate group, 350.org, is urging the Pope to take action on climate and divest from fossil fuels. “As Pope Francis prepares to visit the impacted communities from Super Typhoon Haiyan, we need him to stand in defense of humankind and the environment and take the lead in actions that will help prevent further climate catastrophes. One such urgent action is full divestment from the fossil fuel industry. We urge the Vatican and the Roman Catholic Church to lead the way,” said Lidy Nacpil, 350.org board member.

Fossil fuel divestment has become increasingly popular among faith communities. According to 350.org, "Just in the last few months we’ve seen, the World Council of Churches decide to phase out its holdings in fossil fuels and encouraged its members to do the same." Anglican churches in Australia, New Zealand and Polynesia, the Quakers in the UK, the United Church of Christ in the USA and many more regional and local churches have also joined the divestment movement.

In 2014, the Pope became an outspoken advocate about the urgent need to address climate change. He wrote a letter to Tony Abbott, who headed the G20 summit in November about the "constant assaults on the natural environment," which he said was the "result of unbridled consumerism." He called learning how to respect creation "one of the greatest challenges of our time" and told university students that the "destruction of South America's rain forests" is a "sin." The pope also convened a five-day summit with scientists and experts on the environment. And he has come out against fracking.

The pope is not making any plans to quiet down in 2015—just the opposite. He is expected to publish an encyclical—the highest form of papal writing, which is sent out to the world's 1.2 billion Catholics—in the next couple months that will be on the "ecology of mankind." According to Dan Misleh, director of the Catholic Climate Convent, he will likely advocate action on climate change based on economics and science rather than morality, and he will warn his followers that "acting on climate change is 'essential to the faith.'"

The pontificate is hoping his encyclical will guide world leaders, who will convene at the end of the year at the U.N. Climate Summit in Paris, to finally take the necessary actions on climate change to avoid the most catastrophic outcomes. And his followers are hoping his divine intervention will work, too. “We look to Pope Francis to break the political impasse preventing real action on climate change. Twenty years of climate negotiations have left the world at the mercy of political and economic circles looking to protect their vested interests at the expense of mankind and the planet,” said Yeb Saño, Philippine Climate Change Commissioner. The pope is also scheduled to speak at the U.N. General Assembly in September when world leaders convene to announce new anti-poverty and environmental goals.

The Global Catholic Climate Movement's message is sure to resonate with the pope as he tours the typhoon-ravaged Philippines. In the organization's statement to Pope Francis, it reads: "The impacts of extreme weather on the vulnerable and marginalized become clear as we join the Holy Father in praying for all the families that were impacted by super Typhoon Haiyan—for the many thousands dead or missing and the countless more who remain homeless."

Watch these two Democracy Now! reports, one on the Pope's visit to the Philippines and the other on his plea for climate action: