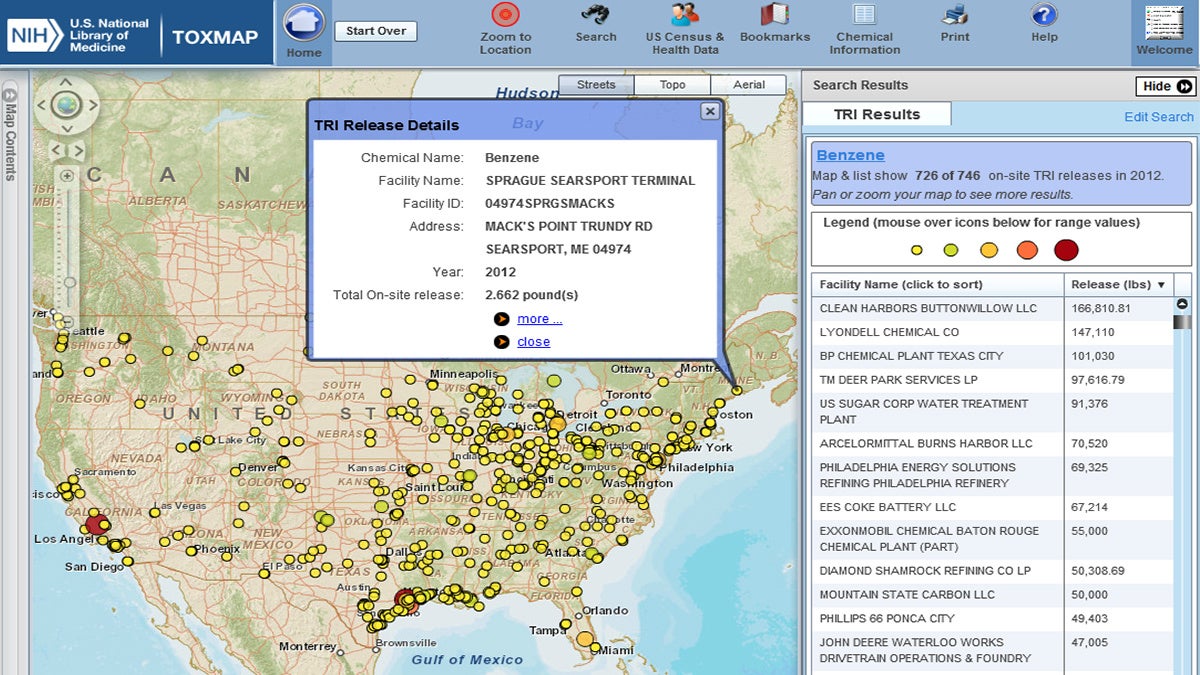 TOXMAP shows data tracking the release of the chemical benzene on May 22, 2014. ColetteHoch / CC BY-SA 3.0

TOXMAP, an interactive online map that used various sources to track toxic pollution across the U.S., disappeared from the internet earlier this month, alarming environmental advocates, according to The Hill.

The 15-year-old interactive map was beneficial to researchers and environmentalists. The National Library of Medicine (NLM), part of the National Institute of Health, hosted it. Some of the information has moved to other sources, while some has just disappeared completely, as Newsweek reported.

TOXMAP offered detailed U.S. Environmental Protection Agency (EPA) data for clearly labeled toxic release sites and offered extensive health and demographic data, like mortality rates, that users could easily overlay on to the maps. The various capabilities and wealth of data earned TOXMAP a devoted following among researchers, students, activists and other people eager to pinpoint sources of pollution, according to Undark.

With little explanation, it was announced in September that the map would be taken down. Then it was removed last week and the former URL showed a message acknowledging its disappearance and ushered visitors to other potential sources of information, as Undark reported.

“Part of the decision was prompted by the increasing availability of the underlying data from their original sources,” said NLM in a statement released to Undark. “Many sources such as the EPA, among others, offer several products that provide similar geographic information system functionality.”

The NLM added in its statement that much of the removed information could be found scattered amongst nine other U.S. and Canadian government websites.

People who used the resource see the hiding of data and removal of information as part of the Trump administration’s pattern of obfuscation and regulatory rollbacks of environmental policies, as Newsweek reported.

Furthermore, the alternative of combing through nine other websites takes away the consolidation of data and the user-friendly interface of TOXMAP.

“Because this information has gotten so complex, and there’s so much of it, it’s very difficult for someone who’s not really trained in the area to navigate it,” said Chris Sellers, an environmental historian at Stony Brook University and a member of the Environmental Data and Governance Initiative (EDGI), which monitors federal environmental data sources and advocates for greater public access, to Undark. “This tool actually cut through all the jargon, all the different interfaces that EPA, for instance, puts up before you get to the actual data that you’re interested in.”

“TOXMAP’s end accords with a larger pattern spanning federal environmental agencies whose intentions have been far from quiet, even loudly trumpeted,” read a December article from the Environmental Data & Governance Initiative (EDGI), according to Newsweek . “The dismantling of such a usable public platform connecting health and environmental data certainly accords with the EPA’s own declared strategies, of seeking to exclude so many environmental health studies from policy-making and to neglect or defund on-going environmental health investigations.”

“Whether these parallels are intentional or not, our National Library of Medicine has now joined this administration’s ideologically-driven anti-science crusade,” the article continued, “effectively shrinking the public’s access to environmental as well as disease and mortality data. As with so many other fronts in the Trump Administration’s interlocking wars against science and environmental regulation, the prevailing hope seems to be that pushing the facts out of sight will diminish Americans’ concerns about the environment.”

Claudia Persico, an assistant professor at American University specializing in public administration and environmental policy, told Undark that the site’s deprecation was a blow to researchers.

“I think it’s really sad that they’re getting rid of this,” she said.

Sellers added, “It was stunning to me that the National Library of Medicine is actually retiring this pretty essential tool for our environmental right-to-know. I hope people will understand what’s happening out there, that the government is gradually cutting off these very valuable tools that are really essential to our democracy.”