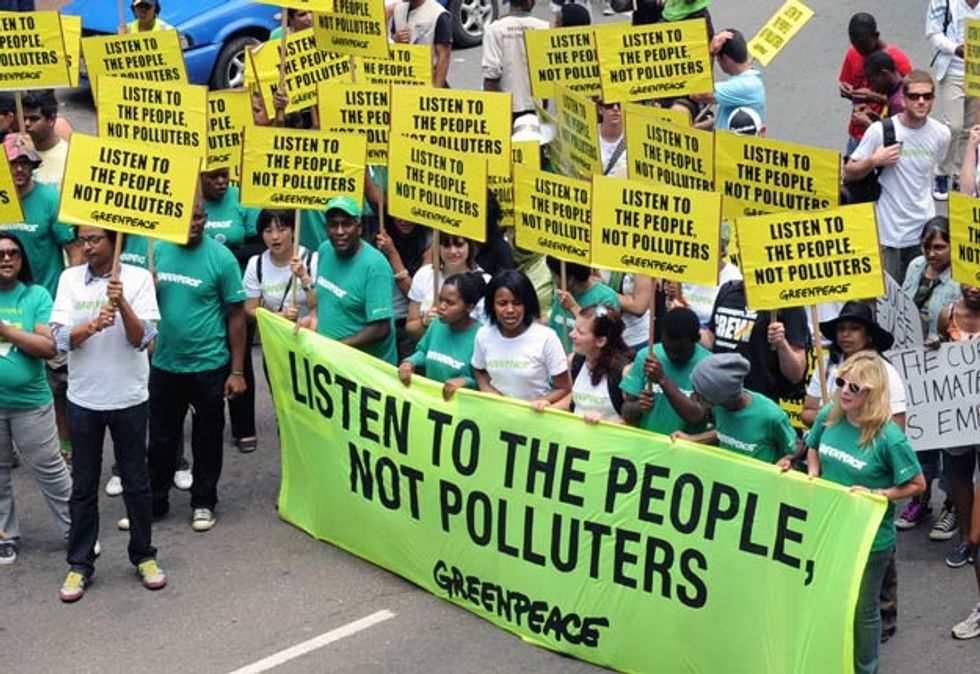 On the closing of the latest round of United Nations (U.N.) climate talks in Durban, South Africa, Greenpeace declared that it was clear that our governments this past two weeks listened to the carbon-intensive polluting corporations instead of listening to the people who want an end to our dependence on fossil fuels and real and immediate action on climate change.

“The grim news is that the blockers lead by the U.S. have succeeded in inserting a vital get-out clause that could easily prevent the next big climate deal being legally binding. If that loophole is exploited it could be a disaster. And the deal is due to be implemented from 2020 leaving almost no room for increasing the depth of carbon cuts in this decade when scientists say we need emissions to peak," said Kumi Naidoo, Greenpeace International executive director.

“Right now the global climate regime amounts to nothing more than a voluntary deal that’s put off for a decade. This could take us over the two degree threshold where we pass from danger to potential catastrophe.

"Our atmosphere has been loaded with a carbon debt and the bill, carrying a Durban postmark, has been posted to the world’s poorest countries. The chance of averting catastrophic climate change is slipping through our hands with every passing year that nations fail to agree on a rescue plan for the planet."

For these talks to have been deemed a success, governments in Durban needed to:

Ensure a peak in global greenhouse gas emissions by 2015.

Coming out of Cancun, Mexico last year, governments were to agree to 2015 targets for global emissions reduction and global peak year for emissions, and they have done neither.

Governments did promise to develop a workplan to close the gap between the science and the government pledges to reduce emissions. However, the lack of ambition is not caused by lack of plans, but rather a lack of political will.

Ensure that the Kyoto Protocol continues and provide a mandate for a comprehensive, legally binding instrument.

Governments did decide that there will be another time frame where governments sign up to deal with emissions under the Kyoto protocol, but postponed putting it into action until next year. On the issue of a new, legally binding agreement, the proposal was watered down substantially to the point where governments have only committed to talking and producing more documents—not actually committing to a new legally binding protocol.

India's role in the negotiations around the new, legally binding agreement was unconstructive and lacked foresight while both the island states and the least developed countries pushed hard for the urgent adoption of a new and ambitious protocol.

In Durban, parties agreed to adopt a second commitment period as well as launch negotiations on a new protocol under the convention to include all parties. With the survival of nations on the line, only the strongest terms—legal terms—are acceptable. Where governments failed was on the timeline. The amendment to the protocol will only be adopted at COP18 (2012) in Qatar, while the new protocol is to be adopted no later than 2015, but only be implemented from 2020.

Governments in Durban spent an inordinate amount of time talking about technical details of the Green Climate Fund. What was needed was not only an agreement on the fund but more importantly how this empty fund could be filled. The goal for developed countries is 100 billion USD per year by 2020. So not only do we face a gap between what the science says is needed and what these governments are prepared to do to avoid catastrophic climate change, we also face a massive gap in finance required and what is available, to mitigate and adapt to climate change.

Set up a framework for protecting forests in developing countries.

Rather than providing necessary guidance and security to civil society, donors and investors, on how best to meet the Cancun Agreement on Reducing Emissions from Deforestation and Forest Degradation (REDD) to “slow, halt and reverse” deforestation in a socially responsible way, the decisions adopted in Durban have increased the environmental and social risks associated with the Cancun objective. Rather than protecting the rights of the people responsible for protecting the forest, the decision opens the doors for the irresponsible companies who profit from forest destruction. An entire year’s worth of negotiations has been wasted.

This should be about governments being open about how they are implementing the agreed rules for action, but in Durban there has been no agreement on how this action will be reported on, by whom or by when.

Also for this to work, there has to be global agreement on how to measure action, but the U.S. refuses to accept that oranges should be compared with oranges.

One bright moment came from China’s participation in Durban. Given where China came in—which was not buying into this process at all—they have shifted their position to allow movement on reporting of how they’re implementation of this convention is proceeding. This while the U.S. has gone nowhere.

On the decision to include carbon capture and storage (CCS) in the Clean Development Mechanism (CDM):

CCS on coal has never been shown to work on a large scale, but U.N. approval increases the risk that new coal power plants will be built, with a dangerous CO2 legacy left for future generations. It is illogical that this technology could now get financing under the Clean Development Mechanism of an agreement that should be saving the climate.