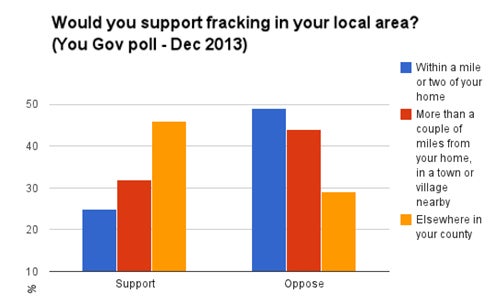 Public opposition to shale gas could be rising, despite the government’s attempts to promote the fuel, according to recent UK polls. The closer the industry gets to reality—and to people’s homes—the more worried the public gets.

Politicians are waxing enthusiastic about the prospect of a new UK shale gas industry. But protesters are worried about the environmental impacts of fracking for shale gas, and what it will mean for the health of local communities.

Media outlets and industry lobby groups have commissioned a welter of polls to find out what the public thinks. We take a closer look.

People’s support for shale gas is wavering, according to a long-running tracker poll commissioned by the University of Nottingham.Pollsters YouGov first asked respondents: “Should shale gas extraction be allowed in the UK?” just under two years ago. In March 2012, 52.6 percent of those surveyed answered yes. By July 2013 this had risen to 58.3 percent.

But in subsequent surveys the value went down again, falling to 52.2 percent in January 2014: 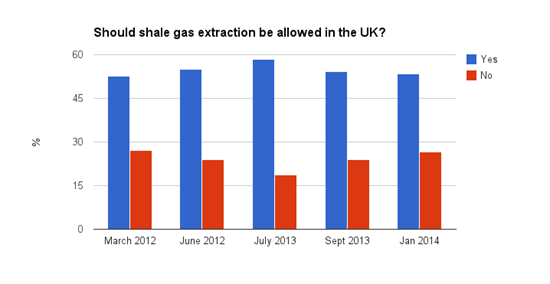 Anti-fracking protests erupted in the village of Balcombe, East Sussex, last August, attracting a great deal of media coverage. It seems possible that the protests, and the environmental and health concerns raised by the protestors, prompted a slide in approval.

They all indicated lower levels of support than the Nottingham university poll, with about 30-40 percent of people saying they are in favor:

Two of these surveys (Opinium/ Carbon Brief and You Gov/ Sunday Times) gave respondents a “don’t know” option. The other two didn’t, which may help explain why support was higher.

Lower Support for Shale Gas Production in the Local Area

Famously, the public is less keen on new energy infrastructure when it’s located in the local area—the so-called NIMBY (Not In My Backyard) effect.

So the questions aren’t directly comparable. But on the whole, they appear to suggest that about 20 to 30 percent of people would support fracking in their area: 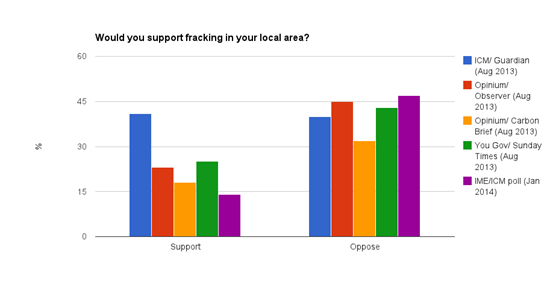 A Sunday Times/ You Gov survey carried out last December explored this effect in more detail. It asked respondents if they would support fracking in their local area if it was within a mile of their home, a few miles of their home, or somewhere in the same county.

The poll found that the further away the fracking is, the more likely the public is to support it: Concern Rising with Prospect of a Shale Gas Industry

The public also appears to be getting more worried as the prospect of a shale gas industry moves closer to reality.

The most recent poll, commissioned by the Institute of Mechanical Engineers a few weeks ago, shows the least positive response to the question of whether respondents would support fracking in the local area. Just 14 percent of people said they would be “happy” if a gas well site using fracking opened up within 10 miles of their home.

As the examples above show, the phrasing of the question may have produced a particularly low level of approval. Or it may be bad news for the government’s pro-shale gas campaign.

Environment minister Owen Paterson argued last week that concern will abate when a few fracking wells have successfully got going, and the public sees it operating without any problems. Paterson may be right, but only time will tell. The polls are likely to keep changing as the industry develops.

Polls we looked at:

This article originally appeared on The Carbon Brief.